On this date in 1973, the Pittsburgh Pirates traded second baseman Dave Cash for pitcher Ken Brett. We just recently featured Brett in our Card of the Day series, so I decided to go with Cash today. He has been here once before when we looked at his 1970 rookie card that also included Johnny Jeter. I was searching to see if Cash had something oddball that I could use here today until I saw him 1971 Topps card and the All-Star Rookie trophy caught my eye. I have already mentioned my love for the 1971 Topps design here multiple times, so with the trophy added in, this is the perfect card to feature today. It also had an interesting side note that you will see in the pricing section below. 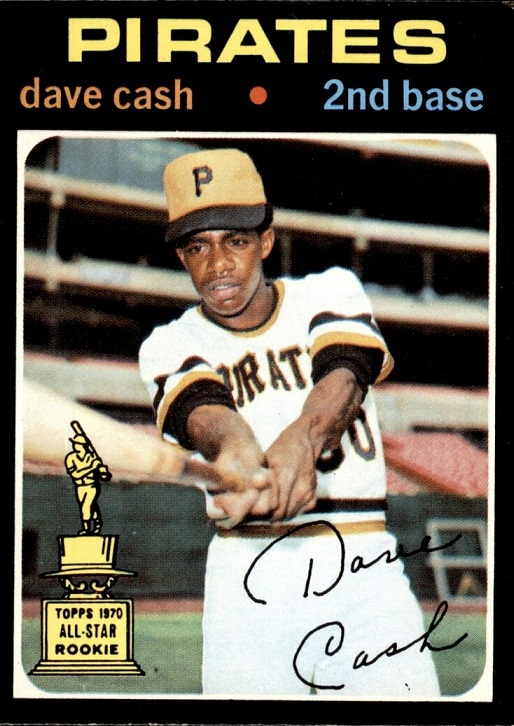 I’m a big fan of the solid black borders here, but I also like what they did with that inside border around the photo with the rounded corners. It’s a nice added touch. Also the Pirates name in yellow at the top really helps make the card design look great. Then there’s always the added touch of those great Pirates uniforms of the time, which other teams in the set can’t match. This is a nice staged photo of Cash with the bat swing towards the camera, with him focused on the bat, which is out of focus. The rookie trophy sets this card apart though.

When I was a kid and looked through old cards, the ones with that rookie trophy always stood out. I remember a time when I thought they were all worth more money and the player didn’t matter as much as the trophy. Cash was a very good player, who burned out early in his career. He was done at 32 years old and he had a negative WAR during his final season. Before that he compiled 26.2 WAR. While it didn’t all come with the Pirates, for comparison sake, 26.2 WAR with the Pirates would be tied for 22nd best (with Elbie Fletcher) among all position players in team history.

I’d say that’s a pretty good player. In the baseball card world though, that amounts to what they call a semi-star and if a common card was worth ten cents, a semi-star would fetch a quarter. I always overvalued those old trophy cards though, and they still look good to me now knowing full well it doesn’t add to the value. Heck, even the Mike Dunne and Al Pedrique cards look better in the 1988 Topps set because of those trophies and their best was behind them when people were getting their cards in packs. 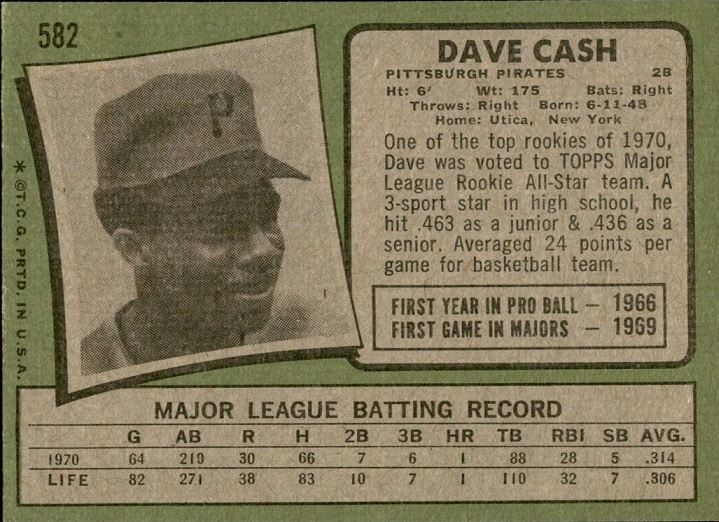 I like the idea that Topps had here by adding a second photo of the card, but man that photo above is really poor quality. One thing I like from the 1971 Topps set is that little box that tells you the player’s first year in pro ball and first year in the majors. They only included 1970 stats and career stats, so that’s a nice added touch. I’d rather have full stats, especially considering how poor the photo quality is here, which takes up a good portion of the back. One thing you might notice from the stats is that they really aren’t impressive for a player with a Rookie All-Star trophy on front. Sure the .314 average looks very good, but he played just 64 games and there’s no power/speed numbers that impress. That’s one of the things about the Rookie All-Star subset. They needed someone at every position, and sometimes some positions didn’t have anyone good. This isn’t the worst one by far, but those aren’t the numbers you think of when you think Rookie All-Star team.

I mentioned above that the pricing section would have something interesting, so here you go. This card is a high number single print card, which basically means it’s tougher to find than a large majority of the cards from this set. It’s not difficult to find compared to some of the older cards we feature here, but it is compared to Topps cards from this era. That makes it a popular card. Ebay right now has more than three times as many sold auctions for this card than active auctions. That’s not something you see often with semi-star or common players, so the fact that it’s hard to find, means people who collect the set buy one when they see it at a good price.

There are four active auctions for this card with a price over $100, and that’s partially due to the fact that this set is harder to find in high grade due to those black borders showing damage easier. The lowest priced active auction right now is $14, though two auctions are running right now that will be done before you read this article, so I didn’t include those cards. Both are under that price right now, and it’s not uncommon to see this card end for around $5 in lower/presentable grade in straight auction settings. It’s the buy-it-now type auctions that ask the higher price and stick around Ebay for a long time.