Back in 2012, we did a two-part interview on Pirates Prospects with 1953 Pirates catcher Mike Sandlock. At the time he was the oldest living former Pittsburgh Pirates player. That article was one of our most popular history articles because Sandlock was also the oldest living MLB player at one time and a lot of Dodgers fans picked up on the story and passed it around. Sandlock played two seasons for the Brooklyn Dodgers. He passed away at 100 years old in 2016, one of just a few big league players to make it to the century mark. He was born 106 years ago today and he had just one* card while with the Pirates, so today we look at his offering from the 1953 Topps set. 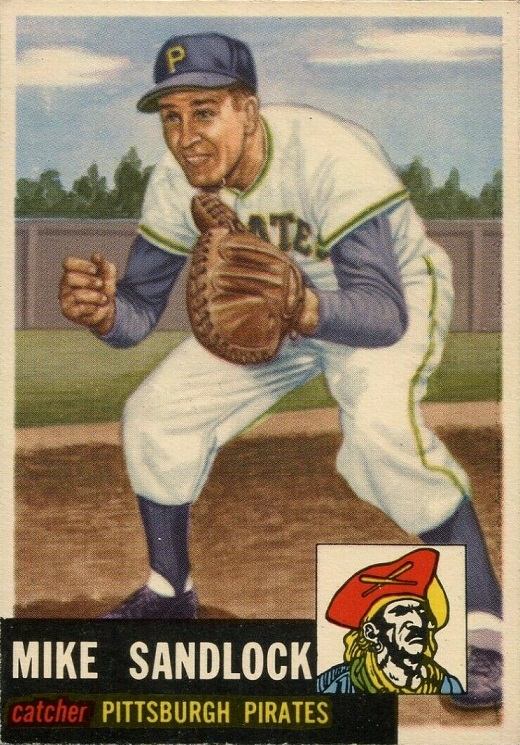 The asterisk up top was there to say that he technically had a second card when Topps issued a set of reprints for this set in 1991. I’m not sure if that counts as a second card or not , but it looks almost exactly the same, except the reprint indicators so people can’t pass them off as real. I’m a big fan of the 1953 set. Topps had some great artwork this year, though Sandlock wasn’t one of their best efforts from that set. However, it’s a cool pose, especially compared to a lot of the other cards being close up shots.

I noticed one interesting thing while searching through scans here. The Sandlock card comes with two printing defects that really stand out when you’re scrolling through a lot of them looking for a good scan. I passed on using one scan because I thought the card had paper loss near the top left border. It turns out than a bunch of cards had ink issues, so part of the background is missing in that spot. Another set of cards had that black box off-center in the bottom where his name/team/position is listed and you can see a red box, which is what many of the other teams in the set used. I found a card with both of those minor issues so you can see. 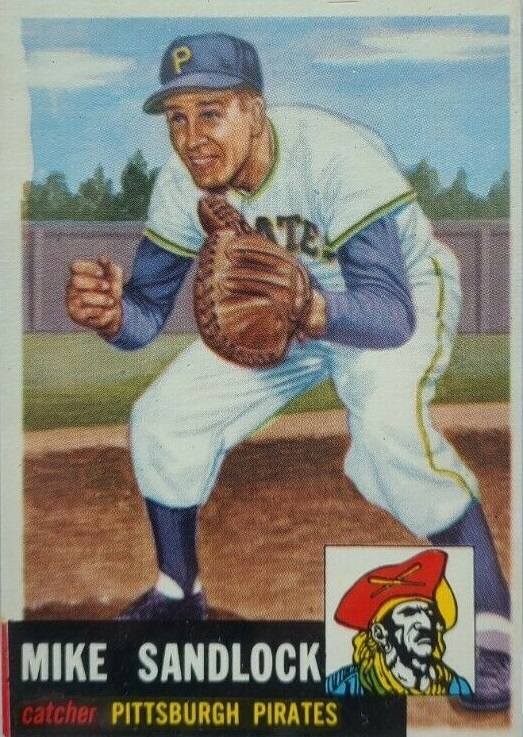 Topps is currently producing a set called the Living Set, where they put out two new cards per week and however many cards are bought during that week is how many they print. I’ve been collecting the Pirates cards in the set since the beginning. The design they are using for that set is exactly the same as the 1953 Topps set. One really interesting thing that set does occasionally is use the team logos from that player’s era. The Pirates current Living Set has Ralph Kiner and Honus Wagner included, and they have different team logos than the current players issued in the set. For some reason they didn’t do the same thing with Willie Stargell and Roberto Clemente. So far none of the Pirates in the set have the logo you see up top, which was used from 1948 through 1957. The Living Set is a great product, with part of the intrigue from me being that the used the 1953 design, including the artwork. 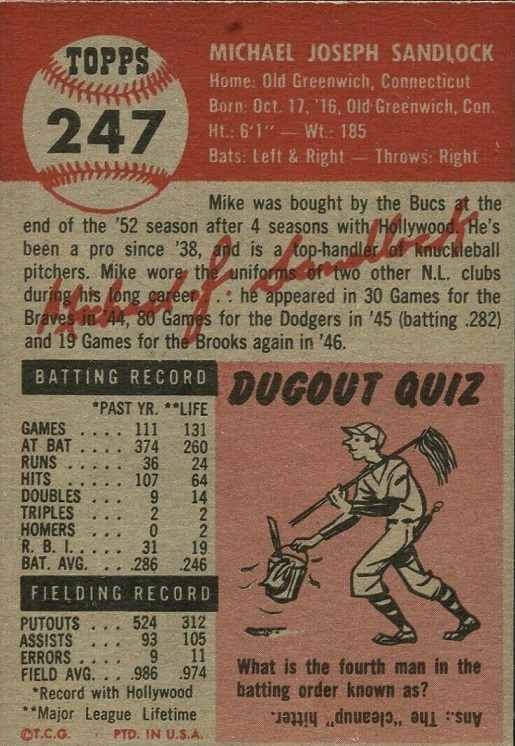 I’m a big fan of these card backs, even though I prefer full stats for players. I just don’t knock the older sets for not doing it because this is actually an improvement over most sets issued before 1953. I don’t like it when it happens in more recent sets, except when they are using throwback designs. It would be odd if the Living Set used the same front design and not the back, so they stuck with the old reliable. Sandlock was in the minors from 1947 through 1952, so they had to use his minor league stats. He came back when the Pirates needed a catcher for knuckleball pitcher Johnny Lindell. When Lindell was sold to the Philadelphia Phillies, they had no one to handle him, so they acquired Sandlock four months later.

If you’re interested in this card, you’ll be happy to know that there are a ton of options on Ebay because the 1953 set is very popular and cards are trading hands constantly. Dealers keep the set stocked in their stores and people are always buying them up and reselling later. There are 147 current auctions and 37 completed auctions over the last three months. A PSA 8 sold for $300 recently, but the prices really drop for lower grades. A PSA 7 went for $78 not long ago. There’s a PSA 7 active now for $82 (plus many $20+ more in that grade). You can go for the nice ones, or if you just want a presentable low grade one, it can be had in the $6-$10 range. I would go a little higher because you’ll get a nicer looking one for around $15-$20. There are two autographed versions in completely different price ranges and the prices aren’t what you would expect when you see them. One is graded/authenticated for $40, with a best offer. Another isn’t graded/authentic at it’s got a $100 price tag.