I’ve featured two cards here from Donruss in 1985, but this is the first regular player card from the 1985 set. I posted once about the Diamond Kings subset, featuring Tony Pena. The other was from the Donruss Action All-Stars set, and the player was Johnny Ray. Today’s featured player isn’t quite on the level of those two players, but he was their teammate in 1984 and today’s his 62nd birthday, so here’s a look at the 1985 Donruss card of Brian Harper. 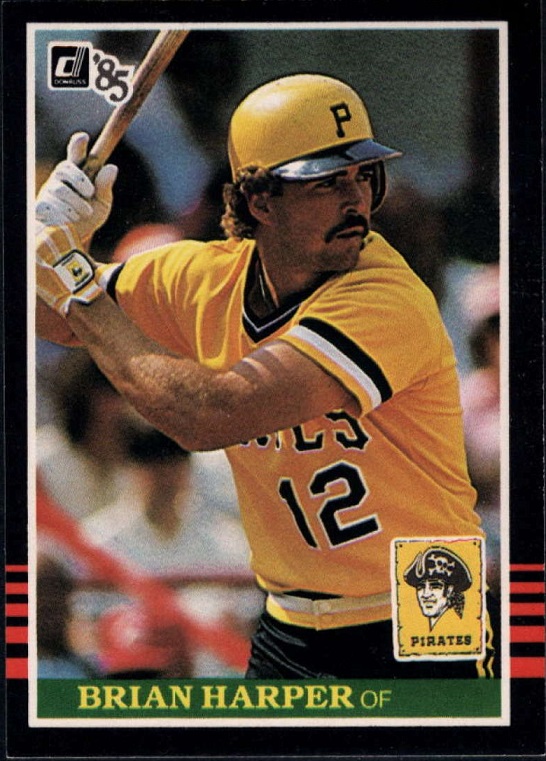 I like the look of the 1985 Donruss set. It’s probably my second favorite design from the 1981-89 run for Donruss, though it’s well behind the 1987 set. I believe it’s the black border design that does it for me, which you didn’t see a lot during that time. Black and red together is a good combo, though I’m not 100% sure what they were going for with the red lines, but it looks okay if you don’t think about it too much. I could have done without the green/yellow combo for the name/position, but Donruss included the team logo on the front and I’m a very big fan of that particular Pirates logo, so they get extra points. The uniform also works for Harper here, with the black pants, gold jersey and gold batting helmet. One thing I like for his in particular is that they have a batting pose. It seems like he preferred the portrait style shots of him staring off in the distance. He has a lot of cards of him staring just off to the side of the camera. So when you scroll through his cards, this stands out a bit. 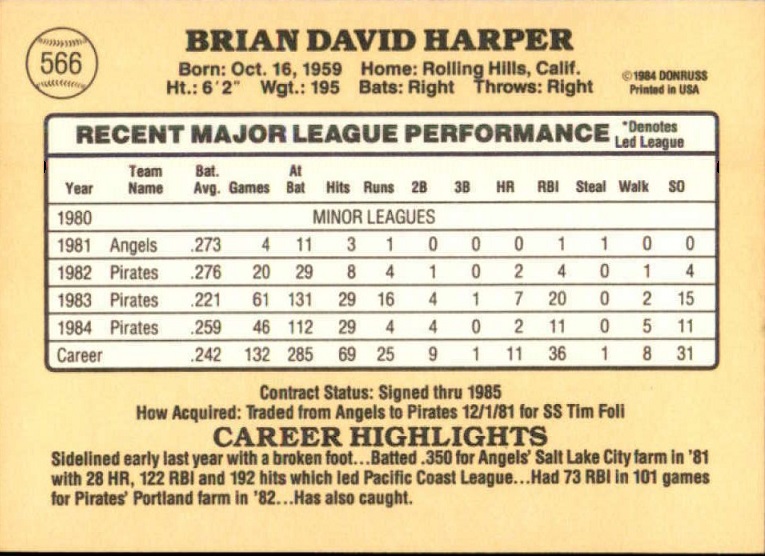 While Donruss did a nice job on the front of the 1985 cards, they went with the same boring design on the back that they used too many times, without many color choices during that time. I mentioned that I like the 1987 set better, but the backs are nearly identical between those two years. I guess they thought they found something that worked and it was one of those “don’t change it if it’s not broken” situations, but it was really lazy considering how long they had to come up with a design

I was never a big fan of the limited stats setup, but this here was an odd one because instead of adding his 1979 stats, which was literally one game, they just noted that he didn’t play in the majors in 1980. What you see here is 131 of his 132 career games up to this point.

Two things of note, and one that I’ve mentioned before. That contract status section is a great resource now because these Donruss cards are sometimes the only place I can find that info while writing up our player bios. The other part is the last three words in the Career Highlights section. Donruss notes that he “has also caught”. Harper is best know for his catching with the Minnesota Twins, helping them to the 1991 World Series victory. However, in his three seasons with the Pirates, he caught a total of ten innings.

This is a common card, one that you can get for about $2 delivered on Ebay, with multiple options in that range. There are three different notes here. One is that you can just get the 26-card Pirates team set for just over $6, so you might want to choose that instead. There’s also a PSA 9 for $12 (has a best offer option) plus $4 shipping. Finally, you can get autographed copies for under $10. Harper signs with Bible verses, such as adding “John 3:16” after his signature which is a popular choice for him.