Carlos Garcia played seven seasons for the Pittsburgh Pirates (1990-96) and he turns 54 years old today. This is his second appearance in our Card of the Day series. The first one was over a year ago when we looked at his 1993 Pinnacle card, which has a great pose. Today’s card is here because it has a very interesting design. It’s not an original idea, but it’s an idea that you wouldn’t normally associate with baseball cards. This is the first time that we are looking at the 1995 Donruss Studio set here.

Donruss set up their 1995 Studio line like they were credit cards. It’s a nice idea to do once. I’m not 100% sure it wasn’t done any other time, but I like the idea. This would actually make a nice looking credit card design, with the National League symbol in the background of a gray card. The card expiration date is replaced by his birth date. I don’t know if credit cards still do this (mine doesn’t), but they used to have a spot where they tell you how long the person has been a member of that credit card company. Donruss replaced that with the date that players debuted in the majors. There is a stat line on the front here (average, homers and RBIs), which replace the credit card number section. There’s also a hologram on front that has a Pirates symbol. Whether you like the design here or not, you have to give them credit for trying it out. Personally, I think it worked well. 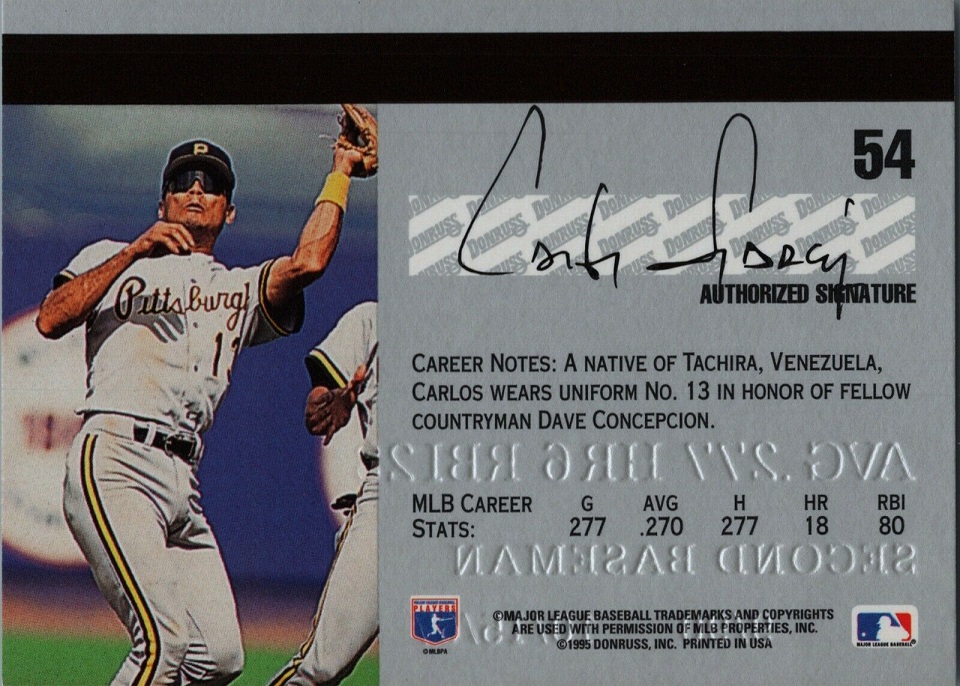 The back of the card has two things similar to a credit card. That’s the area for the authorized signature, which has a facsimile autograph of Garcia, and the black strip up top where you swipe the card. Don’t try swiping one of these cards at the store, they will not work and the cashier won’t appreciate the humor. A nice added touch is that you can see the imprint of the front information backwards on the back of the card, which gives you that authentic credit card feel.

As you can see, they didn’t go all out here with information, but you get an extra photo of Garcia and part of someone else who almost(?) collided with him on a pop up. All they have for stats is five categories and just the career stats, no season stats. The only bio notes they included are about his birth place and why he wore #13. A lot of players from Venezuela wore #13 as a tribute to Dave Concepcion. Garcia actually wore #51 during his first three partial seasons with the Pirates, who then went 21 years without a playoff appearance when he switched to #13. I’m not saying that there’s a correlation, but it’s hard to overlook.

This isn’t an easy card to find, but it’s still a common card when you find it. There’s one auction of note. Someone has six of them available for 99 cents, which is a typical price for single common cards on Ebay, but the $3.50 shipping cost is a lot for one card. However, this is six cards in one auction, so if you want to share them with your friends, go ahead and buy that lot. There’s one seller who has one for $2 delivered, and another who has a solo card for the same price as the six-card lot (99 cent plus $3.50 shipping). Happy Collecting!