Today’s Card of the Day features four players, one of them being a former Pittsburgh Pirates outfielder who was born on this date 50 years ago. Midre Cummings in one of just 15 players in big league history who were born in the U.S. Virgin Islands. That list was a bit smaller when he made his debut back in 1993. Topps featured Cummings on a card with three other top outfield prospects in baseball. As you will see in the breakdown of their careers below, this wasn’t one of those cards that Topps hit on with their choices. Cummings was a top prospect for the Pirates at the time, so it wasn’t a surprise to see him on a top prospects card that was specific to his position. 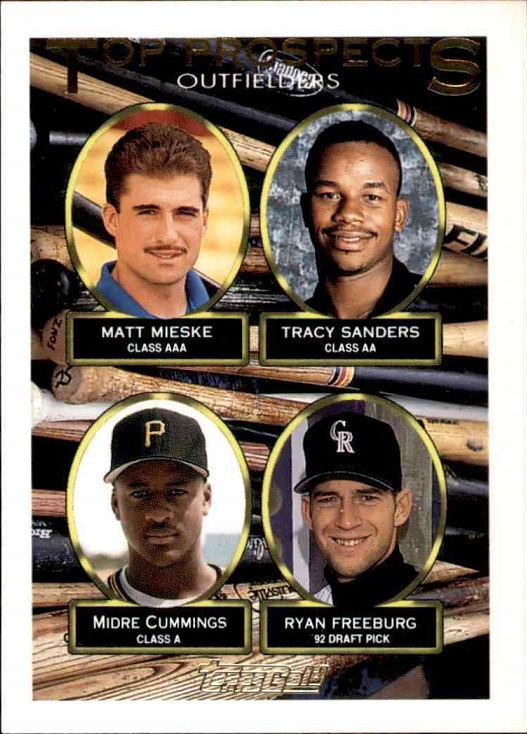 I’ve said many times here that I prefer action poses (even staged action) over portrait style poses, but I can break that down even more by saying that what you see here with the two players on the top row is even lower on my list. They are baseball players on a baseball card. That should lead to something related to baseball on their card. If you just looked at those photos and nothing else, you probably wouldn’t immediately guess that they played baseball. The bottom two are much better. I give these particular cards a pass on the portrait rule because there isn’t a lot of room for each player when you feature four on one card, but they still need to look like baseball players.

This card is actually the gold version of the base card, which is tougher to find. You can see the gold trim around the photos, the ToppsGold logo at the bottom, and “Top Prospects” written in gold lettering at the top. I like the setup here with the stack of baseball bats in the background. Definitely works well with the way they have the players displayed. I’ll get into the players themselves after we look at the back. 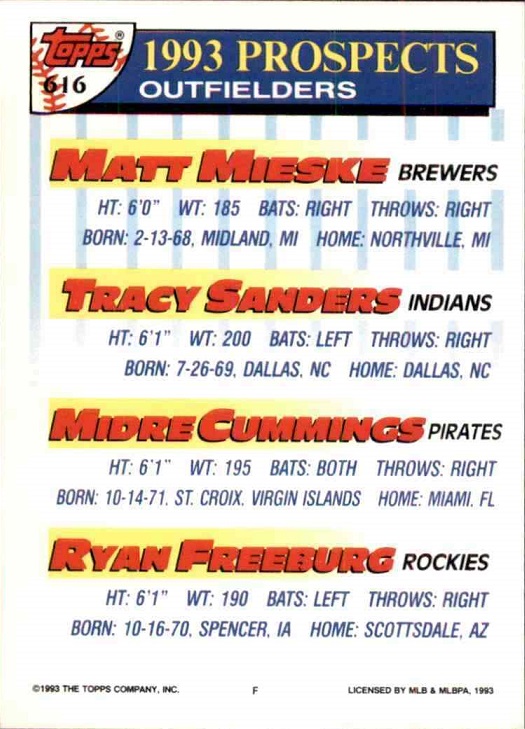 As you can see on the back, there isn’t much to go on here as far as scouting the players. You basically just have their age to look at, but even that doesn’t do much without any stats. Cummings is the youngest player so we will look at him first.

Cummings played 11 seasons in the majors, though he barely played any full seasons. I’m really hesitant to call this selection a miss by Topps, even though he fell well short of star status at any point. On the other hand, how many baseball players in the minors right now would sign up for a .703 OPS over 460 games and 11 seasons in the majors? Considering that a large majority of them will fall well short of that mark, I bet that you would get some agreeing to that deal every day of the week. I think Cummings is the low end of what you should expect from a player on one of these cards, so I don’t consider him a miss.

Since we started with the youngest, I’ll continue to go in that order with Ryan Freeburg. This would be a miss, and I also say that because he was an odd choice from the start. He was a fifth round pick in 1992 who didn’t have much of a debut. Nothing bad, but also nothing to warrant a Topps top prospect card. He played just three years of pro ball and he topped out in High-A.

Tracy Sanders was an interesting choice. In 1992, he was 22 years old in Double-A. He hit 21 homers and walked 77 times, but he didn’t hit for average, struck out a lot for the era, and he didn’t have speed. In fact, he had just 11 doubles in 114 games, so it wasn’t great power, but it was good. He played another eight years and didn’t make the majors. In fact, the name might be familiar to some of the older fans of prospect watching because three of his last four seasons were spent in the Pirates system. He hit 22 homers for Double-A Carolina in 1998, then went to Korea and hit 40 homers in 1999, then came back to the Pirates in 2000 and played at three levels in his final year of pro ball.

The last player is Matt Mieske, and he ended up as the best player on the card, though he didn’t play as many years in the majors as Cummings. He had a peak and then a valley in his last season. He played 663 big league games, hitting .256 with 56 homers and 226 RBIs. Due to poor defense, he was actually a replacement level player during his time, finishing with 0.1 career WAR, which is lower than Cummings. I’d still take the 663 games played if I had the choice between the two careers. As with Cummings, Mieske would qualify as an acceptable outcome for one of these picks. Unfortunately, for a card to be collectible you need a star, not two decent bench player types and two misses.

There isn’t much to say with the price here. There are about 30 auctions for this card on Ebay, with most of them being the regular base card, though you can get the gold version for the same price. Many of them are going for right around $2 delivered. The only one of note is one that is graded PSA 9, which is selling for $16.75 delivered. That’s the only graded one for sale. Only two cards have sold in the last three months on Ebay and one had a blank back, which was a printing error. It didn’t have any extra value, though it sold quickly, so the seller may have undersold his card.