Today’s Card of the Day comes from the 1961 Topps set and it celebrates one of the greatest moments in baseball history, when Bill Mazeroski homered in the ninth inning of game seven of the 1960 World Series, leading the Pittsburgh Pirates over the New York Yankees. That iconic home run occurred 61 years ago today, so naturally we needed to feature Bill Mazeroski for today’s Card of the Day article. However, I took it one step further by finding the card from Topps to celebrate the actual moment. It’s from a subset of the 1961 set that highlighted the entire 1960 World Series. This is card #312, which is the next to last one in the subset, and it’s titled “Mazeroski’s Homer Wins It”. 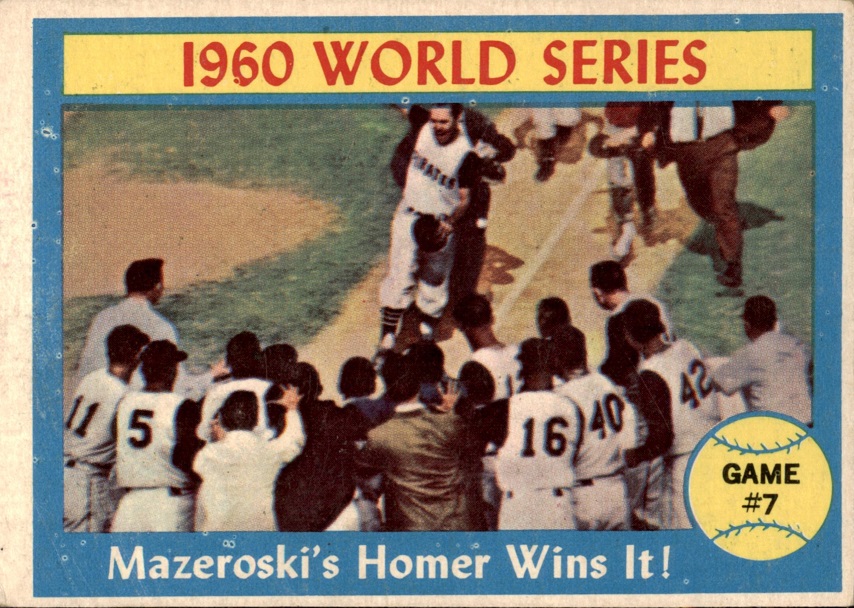 We have all seen the home run by Mazeroski and there are multiple choices for the best picture from that moment. The actual swing would be a good one, but there are two angles for it that are both famous, the TV shot from behind the pitcher, and the one from behind home plate that catches the ball just off of the bat. You also have the shot near second base, which the Pirates turned into a statue. If you want to be cruel to the New York Yankees fans, the shot of Yogi Berra watching the ball go over the wall is also iconic. There’s the scene as Mazeroski rounds third base as well. I’m sure you can picture in your mind all of those moments I just described. The other one you don’t have to picture in your mind is what you see above, as his teammates (and some non-teammates) wait for him at home plate. They had plenty of choices, but I think this one is the best for this card because of all of the teammates, especially since they are identifiable by the jersey numbers if you have a roster handy. 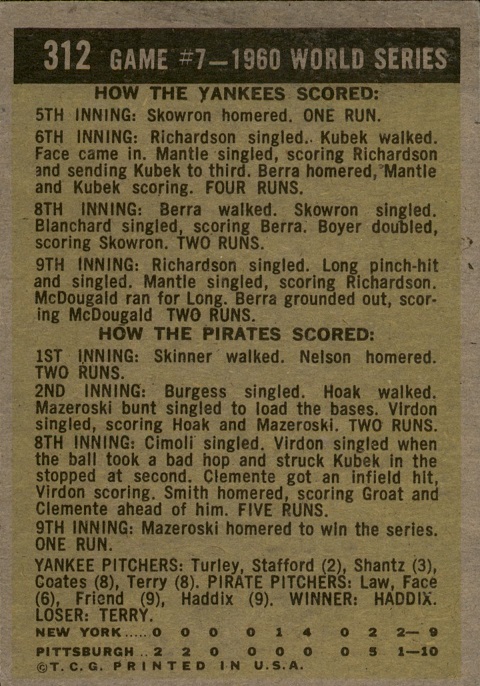 The back has a full rundown of the scoring plays from game seven. That’s what you get with the other cards in this series as well. Early in this Card of the Day series, I featured the card for game #4 of the 1960 World Series, which the Pirates won 3-2. You can check that out to see another great photo from this subset. With only five runs, there was a lot less information on that card. The one is packed from the exciting game seven, which saw 19 runs scored. This really wasn’t a high scoring game until late, as they went into the eighth inning with a 5-4 game, then things got really wild for two innings. This game was long before my time, but I couldn’t imagine the stress of watching it live, then the actual home run must have been amazing.

If you’re interested in this card, then go check out Ebay, where you will find this card in a variety of grades. There aren’t really a lot of them on Ebay right now, which is a bit surprising. The lowest priced one is $16, and then the price goes all the way up to $450 (with a best offer option) for a PSA 8. A PSA 6 is for sale for $125, and that too has a best offer option. There’s also one autographed by Mazeroski, which is $205. Every auction among the closed ones are over $10, except two people listed buy it now auctions for $5 delivered. I’m guessing those auctions didn’t last long because people are willing to pay 3x that amount in low/mid grade.