Today’s Card of the Day comes from a player who didn’t have a card during his playing career, so we have to go with the only available card that was issued long after his career ended. Unless something new comes out, this is going to be the only appearance here in this series for Pittsburgh Pirates pitcher (1928-32) Erv Brame, one of the best hitting pitchers in the history of the game. In 1991, a set of cards from The Sporting News Conlon Collection came out, which featured photographs of Charles Conlon, one of the most famous baseball photographers ever. He had a massive collection of photographs over the years and that 1991 set was the start of a master set that eventually had 1,430 cards released over a five-year time frame. This particular card of Brame was released in the third set in 1993, and it’s #959 in the master set. 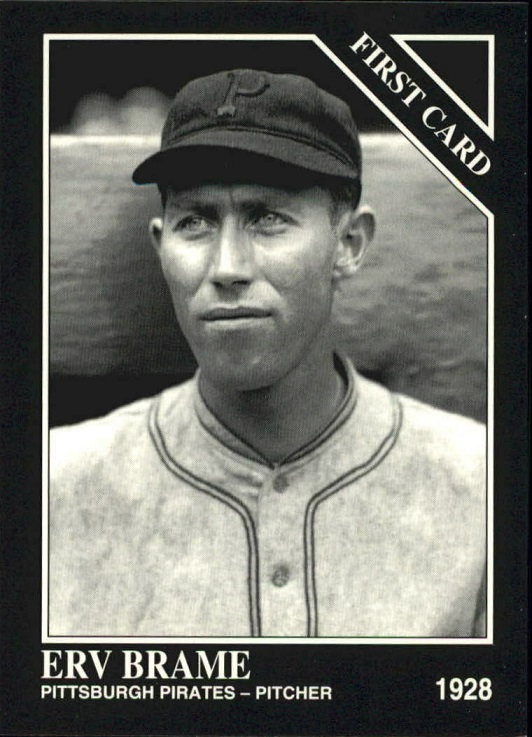 The entire set has black & white photos, with a black border and a smaller white frame around the photo. The players’ names were at the bottom, along with the team name, position and the year the photo was taken. As you can see, this photo of Brame was from 1928, which was his rookie season, though he was already 26 years old at the time. As they did with other players who never appeared in any other sets, the “first card” note was added to the front of the card. 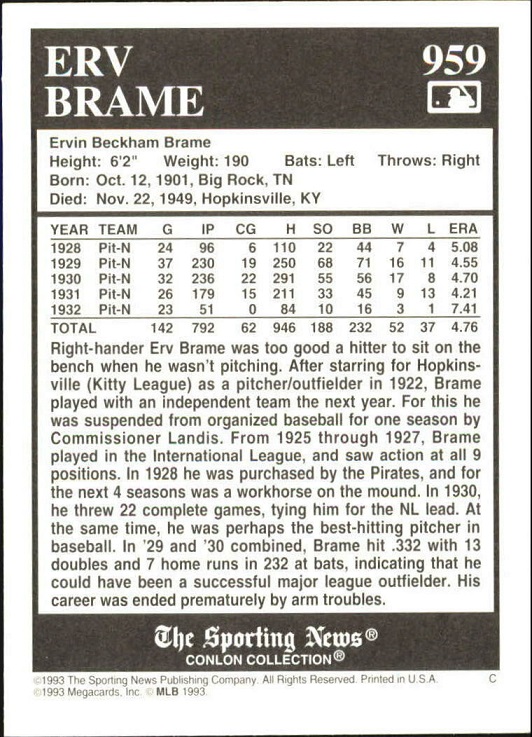 One of the interesting things on this card is the final line. It says that his career ended prematurely by arm troubles. That’s not true. His performance in the majors ended his big league career, but he still pitched in the minors leagues after 1932. He retired on his own in 1935 when he was assigned to a minor league team that he didn’t want to play for, so he just didn’t report, which ended his career.

The bio also notes about his suspension from baseball and his hitting stats. I mentioned that Brame was among the best hitting pitchers ever and it shows in his career stats, as well as his usage. He pitched 142 games in his career, but he played in 218 games. That’s because he was being used as a pinch-hitter. He hit .306 with eight homers and 75 RBIs in 396 at-bats. If you gave him a full-season worth of at-bats at that rate, he’s driving in about 113 runs. The second highest average for a pitcher in Pirates history (100+ at-bats) is a .286 mark in 1953 by Johnny Lindell (his only season with the team), who was an outfielder for many years before becoming a knuckleball pitcher late in his career. If you go just with a strictly pitcher comparison, it’s a .281 average from Joe Bowman and Ken Brett.

The back here has his complete big league stats. As you can see, he only played in the majors for the Pirates and he had quite a peak and quick descent back to the minors. His pro career consisted of five years in the minors, five in the majors, then three more in the minors. It was actually 12 years total, as the 1928 season was split between the minors and majors. If you look at his stats without any context, there appears to be nothing special. However, those 1929 and 1930 seasons are better than you think. The league ERA in 1929 went up to 4.71, a jump of 72 points over 1928. Not only was he better than average, he lowered his ERA 53 points over the previous year. The average ERA went up to 4.97 in 1930, so while he saw a rise, the league rise was more. I noted that he had a short peak and while it looks like he improved on paper (technically he did I guess), that 4.21 ERA in 1931 was 35 points above league average. So while it looks like he did his best work in 1931, he really did a better job during the previous two seasons.

There isn’t much here to say as far as the pricing goes. There are 13 active auctions on Ebay for this card and you can get it for as long as $2 delivered. Basically, just check the shipping charges before you commit to a certain seller because some of them charge outrageous fees for shipping one card.