Today’s Card of the Day is the first from the 1977 Kellogg’s set to be featured in this series. I chose Dave Parker simply because it was the best looking card of the limited options. The set consisted of 57 cards, and it included just three players from the Pittsburgh Pirates. Besides Parker, they also made cards of Al Oliver and John Candelaria. Kellogg’s put out sets with their products from 1970 through 1983, so this set was right in the middle of their baseball card production era. While these cards have no mention of Kellogg’s on the card (front or back), they are easily distinguishable by their 3-D effect. Here’s a look at the 1977 card of Dave Parker. 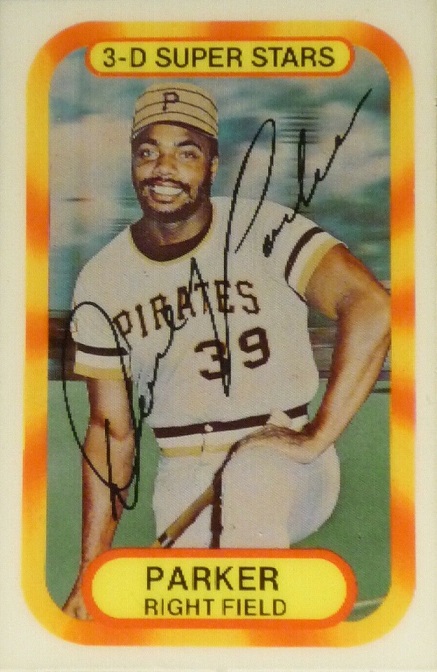 The fronts of these cards were light on information. There’s nothing there to let you know that Kellogg’s put out the set. You would assume that the first people to get them knew because they were either pulled from the box or ordered through the mail, but it proves to be a small hurdle for some when trying to identify the set years later. I’m guessing that was especially true during the pre-internet era. They left off the first name of players, which again was okay for the time, but not everyone in the set turned out to be Dave Parker, so they aren’t as easily identifiable. Most players were stars during the day, but you’re also talking about a time when it wasn’t as easy to get info. The other thing missing is the team name. We just covered a modern card with that same issue, but it was because they only had an agreement with the players, not with MLB. The back of this card mentions the team name in full and has the logo, so that wasn’t the case here. Of course, you could always just look at that 3-D photo of Parker and see the team name, but not all cards in the set were that obvious. The set has a nice little candy corn looking design and it catches the eye, even without the 3-D effect. 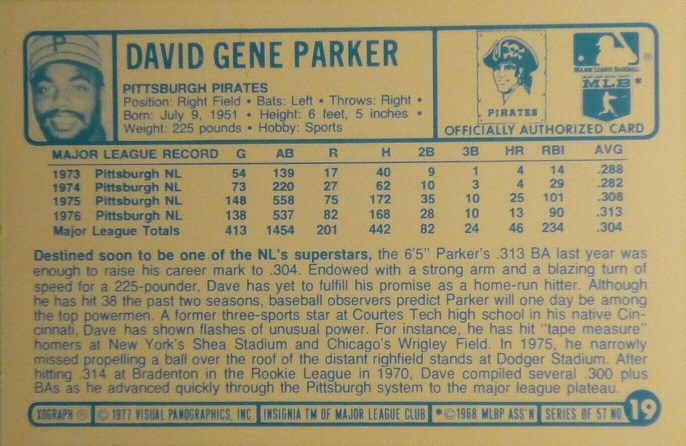 Kellogg’s really got a lot of important stuff onto the backs of these cards. There’s a second photo of Parker, which is a nice added bonus that you don’t often see on cards up to this point. They also added the Pirates logo on the back, which is still cool, even if they didn’t use the team colors. They got all of his big league stats, sacrificing the minor league stats for a huge bio section.

The bio is packed with information, though it focuses in on his power potential and notes that Parker is “destined to soon be one of the NL’s superstars”. I’d say that they did a great job with that prediction because Parker was an All-Star for the first time in 1977, won his first Gold Glove, and he finished third in the MVP voting. That was followed by his MVP season in 1978, and then he helped the Pirates to the World Series in 1979. So yeah, they hit that nail on the head.

The small print at the bottom adds an interesting word to the vocabulary in “xograph”, which is sometimes how you will hear this set referred. It’s the printing process that caused the 3-D effect. It really is strange that Kellogg’s didn’t mention their name anywhere, so most people are lost when they first see this card as far as set identification. The back notes that they were made by Visual Panographics Inc, but that’s who produced the cards for Kellogg’s.

If you’re interested in this card, it’s a popular collectible on Ebay and it’s not that common. There are ten closed auctions over the last three months and just seven active auctions. That tells you that people are looking for them, and 17 auctions total in three months on Ebay isn’t a large amount. There’s a very interesting active auction with the card in the original packaging, which is difficult to find. People have been paying around $10 for one of these cards, but some lucky bidder got one in late August in an auction-style listing for $3.49. So you might be able to get a better price with some patience.