Today’s Pittsburgh Pirates Card of the Day is a nice offering from Donruss, featuring Andrew McCutchen on a throwback design. This card would be a favorite of mine if there wasn’t one big issue that takes away some of the eye appeal. In 2017, Donruss included retro cards that looked just like their 1983 Donruss set on the front. The back didn’t look anything like those cards, but the front had a great retro look and they called them Retro cards. I really like the throwback design looks, but this card is missing a few things that could have made it even better. With today being Andrew McCutchen’s 35th birthday, we include him here  for the first time in exactly one year. Here’s his 2017 Donruss card that is numbered (and lettered I guess) RV-26. 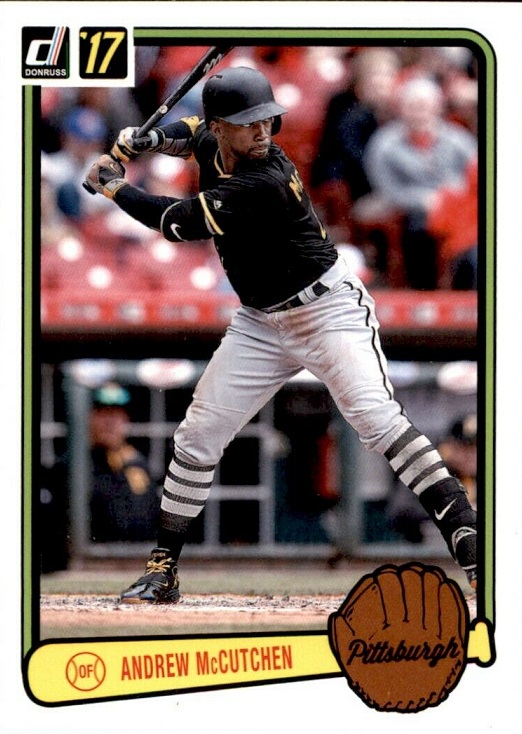 This front design comes from the 1983 Donruss set. It’s strange that I really like this card because the 1983 Donruss set has to be the most unoriginal set from back-to-back years. This is almost the same design as Donruss used in 1982, except that they used a baseball glove in 1983 instead of a baseball like 1982. Some things changed positions, but the name/position in the bat was the same. The white borders and photo frame were the same. The Donruss logo with the two-number year is the same. Oh wait, in 1983 it moved from the top right to the top left. So a set from 34 years later that mimics the laziest front design in baseball card history shouldn’t be so popular, but I love the look of this card…sort of.

Donruss had a contract with the MLB Players Association, but not with MLB, so take a closer look. There’s no mention of “Pirates”, there are no team logos on the uniform. This guy Andrew McCutchen was apparently an outfielder for Pittsburgh. It sort of looks like a Pirates uniform, just missing some key details. I think it really stands out the most on the helmet.

I still like the card though. The retro look, the popular all-time star, the great action shot. It works, even if it could be better. 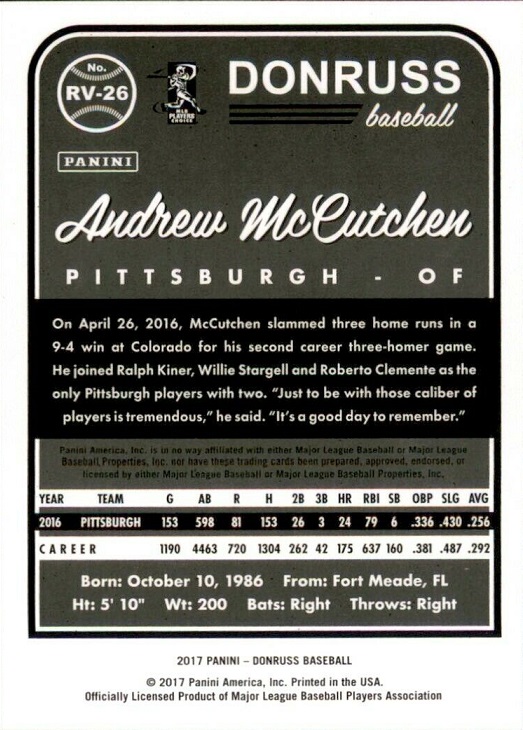 The 1983 Donruss set had unoriginal backs that looked the same as what they used every year for quite some time during that era. However, that was much better than this back. I didn’t find a black & white version, this is really what it looks like. There’s a fact there about him having two games with three homers, joining elite company of Ralph Kiner, Willie Stargell and Roberto Clemente. Notice that the back says Pittsburgh in three spots.

Check out the declaration from Donruss put right between the quote and the stats for McCutchen. The tell you in no uncertain terms that they can’t use MLB names and logos. In other words, it’s their legal mumbo jumbo.

If you’re interested in this card, then there are a few options on Ebay. It’s a cheap card because they aren’t as collectible, partially due to the fact that some people just don’t want the cards without logos. There are multiple sellers who have this card for less than $3 delivered, and there are a small amount of closed auctions over the last three months that went in that same price area. There are also a few tougher to find versions of this card. One is a Gold Press Proof, which is numbered to 99. There’s a Aqueous (don’t ask me) variation that is numbered to 49, and two are available on Ebay. There’s also a magenta back and a career stat line version. If you want my advice, just grab the regular version for $2-$3.