The 1968 Topps set has two cards titled Pirates Rookies. We featured the first one here 13 months ago, which shows Carl Taylor and Luke Walker. In that article we made mention of the second Pirates Rookies card that shows Bob Moose and Bob Robertson, which we are featuring today. I’ll also note that I made a brief mention just a few days ago about posting another Bob Robertson card soon. I wanted to wait until today for this particular card because Bob Moose was born on this date in 1947. So here’s the Rookie Stars card of two pretty good players and members of the 1971 World Series winning Pittsburgh Pirates, card #36 from the 1968 Topps set. 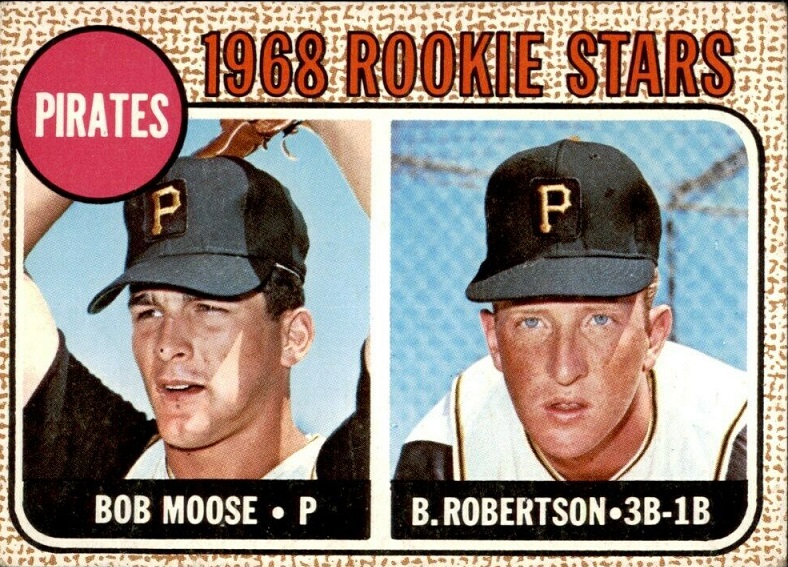 I’m a fan of the 1968 Topps design. It takes a backseat to the 1962 design, which is my favorite from the decade, but it makes a good run at second best. I think I like the 1960 set more because of the horizontal layout and two-picture setup, but I’d rate the 1968 set third. The team rookie cards are obviously a bit different than the regular player cards, but it’s the same basic design. Some sets rate higher with me because of the look of the Pirates cards. That is definitely true of the 1981 Topps set, which I like overall, but the Pirates cards really stand out because of the use of team colors. The 1968 set gets points deducted for the pink/white “logo” for the Pirates that you see in the top left corner here, which is on the bottom right corner on the regular cards.

As for the players, this is the rookie card for both players. That seems like an obvious statement, until you realize that Topps used many players more than once on these Rookie Stars type cards. In fact, Robertson is on a 1969 Topps Rookie Stars card for the Pirates with Bruce Dal Canton and they used the same exact picture for that card that you see up top. Robertson really looks young here. He was probably 20 years old when the photo was taken, assuming it was Spring Training of 1967. Moose was actually the younger of the two players by almost exactly one year, which I wouldn’t have guessed based on pictures alone. 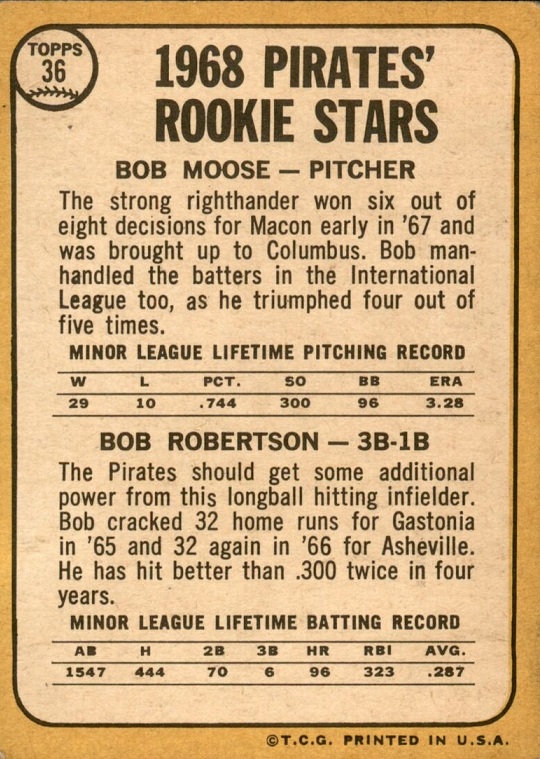 The back gives you a brief summary of the two players, along with their lifetime minor league stats. The reason that Robertson showed up on two rookie cards is that he missed the entire 1968 regular season due to surgery on a damaged kidney. He played nine games for the 1967 Pirates (which isn’t mentioned here) so they probably expected him to contribute in the majors in 1968. Moose made two starts for the 1967 Pirates, then became a regular in 1968, with 22 starts and 16 relief appearances, throwing a total of 170.2 innings.

This card is a great one because it features two key players from a World Series winning team. Both players saw their careers end too soon, but sadly for Moose it was because he passed away on his 29th birthday. Robertson saw his prime cut short due to back issues that really limited his peak. The fact that they were regulars on the 1971 champs gives them a special place in the hearts of fans who are aged enough to remember that team. Topps did a great job with the player selection on this card because both gentlemen were strong players at one point early in their career. Obviously they couldn’t have predicted how their careers would go, but they hit the nail on the head when predicting that they would be star players.

If you’re interested in acquiring one of these cards, and I’m assuming that you are because you’re on a Pirates history site, then let’s look at the pricing and options. There are 48 active auctions at the time of this writing and about ten of them can be had for under $4 delivered. There’s a PSA 9 for $74 and a PSA 8 for $64. There’s also a PSA 8 for just $39, which seems like a very good deal compared to what else is listed, but a PSA 9 ended for $42 not long ago. The cheapest PSA 7 is $26.