I have wanted to feature a Topps team card here for quite some time, but I always get caught up on the fact that these team cards have design flaws. Topps has included team pictures many times over the years in their sets and there’s always two major issues. The first one is that you’re trying to fit 30+ people on a small card, so it makes it difficult to identify the players. The other issue is that Topps didn’t try to help out that first issue in any way. In fact, some of their backs over the years made it a little more confusing. Today we look at the 1973 Topps team card, which has a different back setup than some other years. I chose the 1973 set because it hasn’t been featured here in over five months. 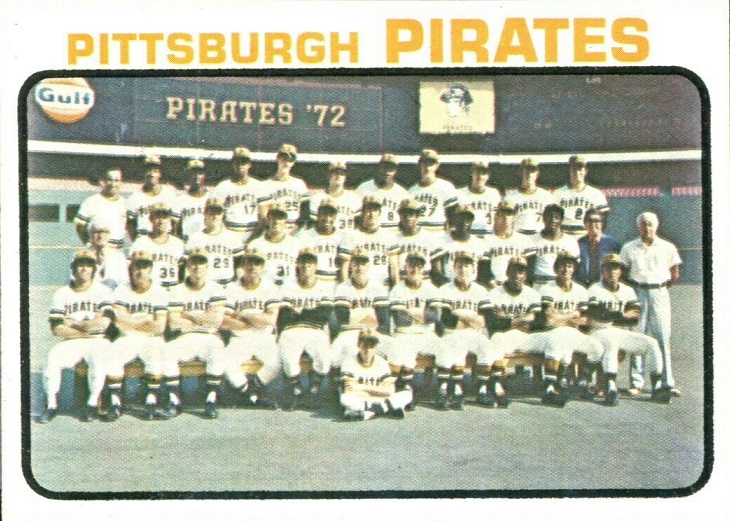 Having a bigger scan helps you see the card a little better than holding a small card in hand. However, the photo quality here wasn’t that great to begin with, so making it bigger just highlights the poor photo. Some of the jersey numbers can be seen in the photo, so that helps somewhat with the player identification, but you won’t get all of them that way. The important players here are spread out. Bill Mazeroski is near the bottom left. Roberto Clemente is near the bottom right. Willie Stargell is top middle. This would be the last team photo card with Clemente, who passed away just as these cards were being put into circulation.

I originally thought about doing a team card today because it’s Danny Murtaugh’s birthday and he would be a good Card of the Day subject, but he wasn’t the team manager in 1972 when this photo was taken, so he’s not shown above. Don’t worry though, he’s been here multiple times already in this series and he will be here it again sometime soon I’m sure. 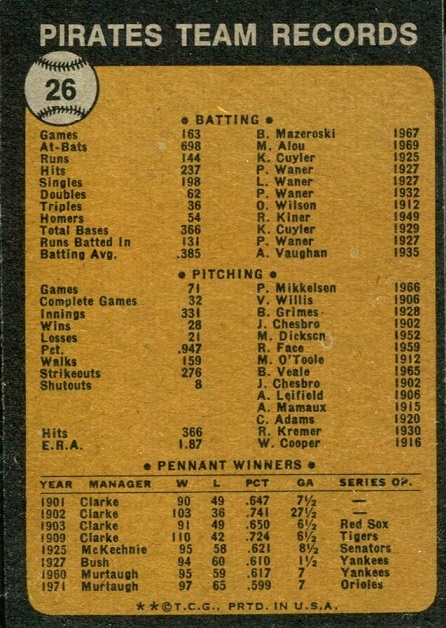 I really like what Topps did here with the back, though I like the idea more than the final results. They decided to add team records and pennant winners. The problem is that many of those team records are wrong. It appears that they just decided to make a cutoff for records at 1900 and didn’t tell anyone. However, the ERA would still be wrong, though they could just be using the date that ERA became an official stat (1912) and then it’s correct. The only batting category that isn’t correct is the runs scored. Jake Stenzel holds the team record with 150 in 1894. Patsy Donovan ranks second with 147, which was also from that 1894 season. Cuyler ranks third all-time. On the pitching side, only the games total and winning percentage were correct at the time.

I mentioned that sometimes these backs added to the confusion of the front. This one avoided that by going in a different direction. Others would have checklists for cards in the set, which would have players who weren’t in the team photo because they joined the club later in the season. That also meant that there were players who didn’t have a card in the set too because they were gone before the end of the season. In some cases they were shown on their new teams, while some players just didn’t have cards at all in the new set. It was possible to have a player on a team card and not be shown with that team on his individual card in the same set.

If you’re interested in this card, then you’ll be happy to know that it’s easy to find in any condition to suit your collecting needs. There are two PSA 9 auctions up right now. One is $124, the other is $114. A PSA 8.5 is going for $104. If you’re deciding between those two grades, spend the extra $10. The cards might not look any different to the naked eye, but that grade difference equals more value. If top tier cards are out of your range, then there’s a PSA 7 for $42 shipped. There’s a really interesting auction up now with the card being autographed by four players, Richie Hebner, Gene Alley, Steve Blass and Dave Giusti. That is going for $18. Another autographed by three other players, Jackie Hernandez, Bruce Kison and Dave Cash, is $15. With Kison and Hernandez both passing away within the last three years, that might be the better value of those two cards.

If you just want the no frills, regular card, you can get lower grades copies for $2 delivered. That’s pretty good considering that Clemente, Stargell and Mazeroski are all there representing Cooperstown, as well as many other players who are still fan favorites.