I decided to do something a little fun here today. I wanted to use Gene Clines as today’s Card of the Day for his 75th birthday. He’s been in this series once, back on his 74th birthday when I used his rookie card, which he shares with pitcher Fred Cambria. Clines was with the Pittsburgh Pirates for five season (1970-74), but his 1975 card shows him with his new team (New York Mets), so there really aren’t a ton of options for him that have him in a Pirates uniform. Whatever I ended up choosing from that era, it would be a set that has been used here multiple times already. So I ventured out of his land of Pirates cards and found an interesting card from his second playing career, and it has a bit of a Pirates connection. Here’s his 1990 Pacific card, with plenty of explanation below. 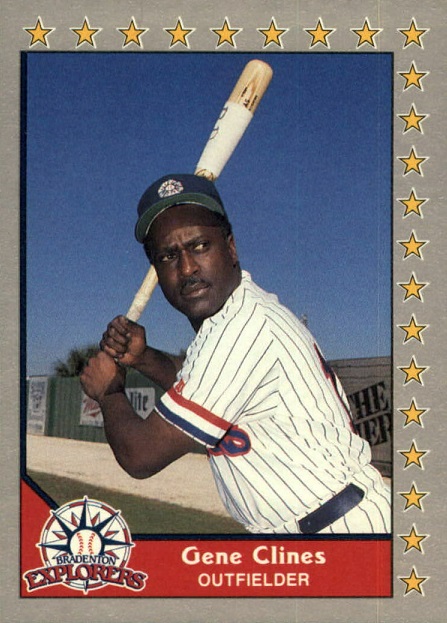 In 1989, there was a Senior Professional League that had players who were 35+ years old playing in Florida during the winter. If you were a catcher, you only needed to be 32 years old to get into the league. It sounds like an amazing idea to me now, but I could picture it being much more difficult to do now due to the current salary of players. These teams had a lot of guys from the 1970’s who make good money for their day, but nothing like what you see today, even for rookies in the majors, who start out making great money. A player like Gene Clines in his prime now would be making millions per year, so what are the chances that you could pay a player like him thousands to play winter ball after he’s retired in a league that you hope is competitive? Back then this league also served as a last chance for some veteran players to hang on to their big league dreams.

Clines was probably playing in the league for fun/competition, as well as a little bit of extra income. He had no aspirations to get back into the majors I’m sure. He was 43 years old and ten years removed from his final game in pro ball. The appeal of playing in the first season probably coaxed some players to join, because at the time they had no idea that the league would last just two seasons. The league got some big names attached, such as Hall of Famers Rollie Fingers and Fergie Jenkins. In addition to Clines, the 1989-90 Bradenton Explorers had one-time Pirates Al Oliver, Manny Sanguillen, Bruce Kison, Omar Moreno, Jim Morrison, Gary Alexander, Mickey Mahler and Wayne Nordhagen.

The front design here is decent, but what is really special about this set is that it captured a league that is all but forgotten now. The team logo obviously had some thought put into it, showing you that this league was legit at the time and not just thrown together. I’d be watching these games during the off-season if the league was around now. Heck, I watch foreign league games every winter where I’m only catching half of what they’re saying because my Spanish is mediocre at best, and I have no clue who some of those players are in the league, so I think I’d watch a league full of former big league players down in Florida. 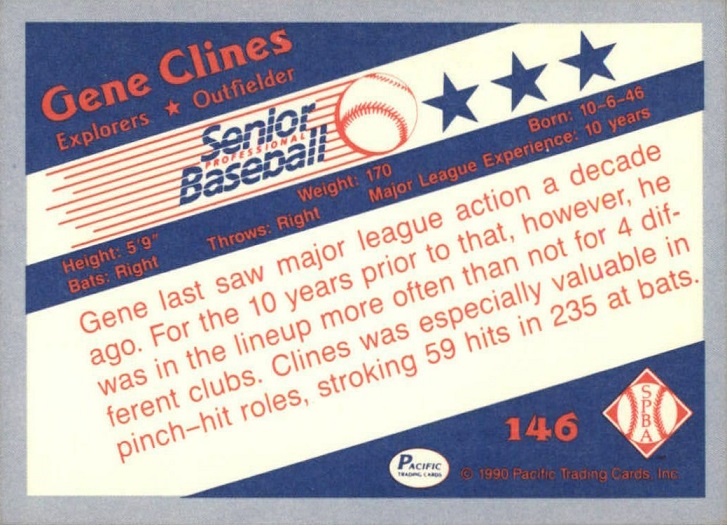 I had to do some digging to find statistical information from this year. Clines hit .328 with one homer and ten RBIs. He also got to manage a handful of games mid-season during the 72-game schedule. There were no stats on the back of these cards. They offered a little bit of bio information on the players, as well as some quick facts about their career. They took up a lot of the back with the league banner below the name and the league logo in the bottom corner.

If you’re interested in this card I’d suggest getting the whole set. There are some great names in there and plenty of former Pirates. This card individually sells for $2-$3 delivered. There are two autographed copies available, one for $10 and one for $14. As for the entire set (220 cards), at least ten sellers have the set for sale between $15-$20. I got mine a little cheaper in a regular auction, while all the others a buy it now options.