Back in May, we featured a 1941 Double Play Bob Klinger card in our Card of the Day series. This is also an article about a 1941 Double Play card of Bob Klinger, pitcher for the 1938-43 Pittsburgh Pirates, who would have been with the team longer if not for serving in the military during WWII. The Double Play set features two cards together on one card. It’s tough to say if they were meant to be separated or kept as one card. There was no dotted line on the card for cutting like strip cards had back in the day, but each player in the 1941 Double Player set was individually numbered. The first Bob Klinger card I posted about here was a portrait shot and had him paired with Pirates pitcher Mace Brown. Today’s card is an action shot and he’s paired with Stan Hack, third baseman for the Chicago Cubs. 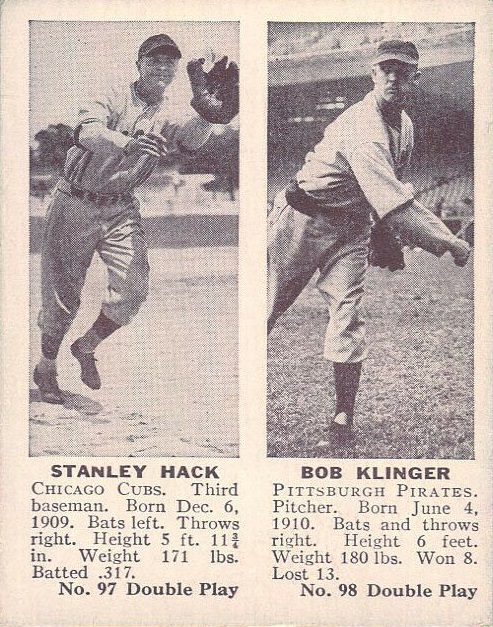 I like this Klinger pose a lot more than the other one in the set, but I like the other card more. The pairing of Klinger and Brown gives you two players on one card who were quality pitchers for the Pirates. Neither of them shows up in a lot of baseball card sets, mostly because they didn’t make a lot of sets during their time in Pittsburgh. However, I’m a much bigger fan of action shots than portrait style poses, and this card has a great shot of Klinger. I have a good story (at least I think it’s good) about this particular card.

I decided one day that I wanted to get all of the Pirates players in this set. It’s not as big of a task as I just made it seem. There’s the previously mentioned Klinger/Brown card, another one featuring Arky Vaughan and Lee Handley, then another one with Elbie Fletcher and Deb Garms. Then this Bob Klinger card featured today. Seven total cards, two featuring the same player. Having a player from another team in my team set of the Pirates just didn’t seem right to me, but I was going to go through with it anyway until I found an auction for just the Klinger side of this card, so I bought that. The fact that it was separated lowered the price of the card to under half of the price for the whole card, which worked out great for me. So I own a Pirates team set from the 1941 Double Play set and there’s no Stan Hack included in there.

Hack was a good player. In fact, a few people have mentioned him as a possible Hall of Fame candidate. He was a .301 career hitter with over 1,000 walks and 1,239 runs scored in 1,938 games. He was also considered to be a solid defensive player. His 55.5 career WAR for position players ranks 151st all-time. That’s definitely fringe-worthy, but remember his name when David Ortiz makes it on the first ballot with 55.3 WAR and 1,500+ more plate appearances to compile those numbers.

Klinger doesn’t compare to Hack as a player, but he stands out more when compared to Pirates pitchers than he does to big league pitchers in general. He won 62 games in six seasons with the Pirates. Hack played through the war years, but Klinger could have made a bigger name for himself in baseball if he didn’t lose the 1944-45 seasons to service. Those 62 wins don’t sound like a huge number, but here’s the list of guys who have won 62+ games for the Pirates over the last 30 seasons:

If you’re interested in getting this card, and it really is a classic card at the end of the pre-war era of card collecting (some people count the break at pre-WWI, but to each his own), then you’ll be happy to know that it’s not that pricey. This particular scan came from an auction for a PSA 5 card and it is $60 delivered. There’s a nice looking one for $45 and another in low/mid-grade for $21, and both of them have “best offer” options. The fourth one currently on Ebay is a PSA 8 and the seller wants $300. I don’t know if that’s a good price or not, but I know that you won’t find many in that grade (or higher). Two have sold on Ebay in the last three months. One was $13 for a low-mid grade card and the other was by SCD as a 5 and it went for $23. That’s a big difference in price from the PSA one currently up, but PSA cards get the best prices, so that matters to collectors.