Today’s the birth date of one of the all-time greats in Pittsburgh Pirates history, who probably doesn’t get enough recognition. Not only was he a great player, he managed the team to four National League pennants, two of them back before the World Series started, otherwise he might have more than one title. Heck, he might have more than one title if the Pirates had enough healthy pitchers for the 1903 World Series. Fred Clarke deserves to be in the Hall of Fame as a manager. He made it as a player instead, which I’m sure he was fine with for the 14 years on Earth that he got to enjoy the title Hall of Famer Fred Clarke. He’s been featured here once before, but this is his first solo appearance in a Card of the Day article. The other was from the great T202 set, where he’s one of the side panels. 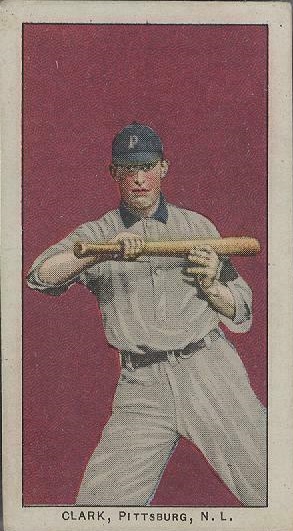 Most of the cards in the E96 set had a solid one-color background like you see above, but a few had two colors, and a few had a baseball background (basically blue sky and green grass). You’ll probably notice the interesting pose on the card first, but what stood out most for me is that Clarke is spelled wrong on the card. That’s a bit surprising considering that he was a famous player/manager in his 17th year in the majors in 1910, he also had a brother in the majors and it’s not a difficult last name to get correct. Sure, the Clark spelling is more common, but this isn’t the only name that they got wrong from this set, as you will see on the back of the card. Take in that interesting pose again, then let’s skip to the back because the set will be easier to explain with that visual. 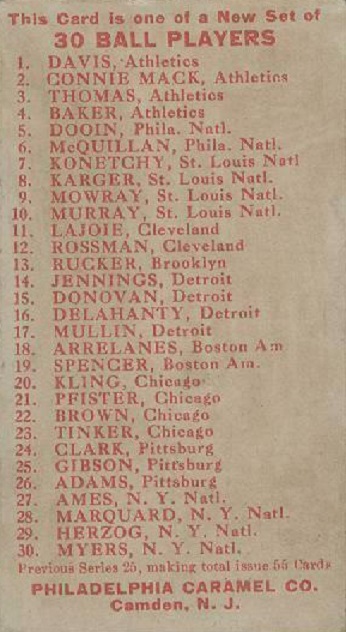 I like these backs because it has the checklist for the entire set. Not many sets from this era have that feature. Most have big ads for whatever product that they’re trying to sell. If you notice at the top, it tells you that this is a new set of 30 cards. Now skip to the bottom of the checklist and you’ll see that it says “previous series 25, making total issue 55 cards”. That 25-card issue is known as the E95 set. We just featured that set here with Nick Maddox not long ago. Despite Clarke being the much better known and much better overall player of the two Pirates, the E95 set got the pick of the litter and included some of the biggest stars in baseball at the time. That makes the E95 much more desirable than the E96 set now, though this is still a popular issue. You have a total of eight Hall of Famers on that checklist here. That’s a nice total for a small set, but the E95 had ten out of 25, and they included the powerhouse trio of Honus Wagner, Ty Cobb and Christy Mathewson, who stand out even among Hall of Famers.

The big card in this set is probably Nap Lajoie, though the Connie Mack card is also very popular because he doesn’t have a lot of choices when it comes to cards. He isn’t in many of the popular sets of the era. Also notice that they spell out his entire name, while noting that his actual name was much longer (Cornelius McGillicuddy). I mentioned other spelling errors besides Clark/Clarke. That doesn’t include Mack, who went by Connie Mack just to make things easier. Mike Mowrey, who would end up on the Pirates in 1914, is spelled Mowray on the checklist. Chief Meyers is missing the first E in his last name. Jack Pfiester, a former Pirates pitcher, is also missing the first E in his last name. Finally, Frank Arellanes got an extra R and not enough L’s in his last name. He was out of the majors by the time some people were getting these cards, but he had a strong 1909 season in the middle of his brief three-year career, so he wasn’t a bad player to include.

If you’re interested in this card, there are five options available and I’ll list them all. They are all graded. The top price is $1,925 for an SGC 70. The same seller has an SGC 40 (It’s basically 2.5 grades lower than a 70) and that’s going for $467, less than 25% of the price of the other card. The next one is $400 for a PSA 3, and I’ll let you in on a secret. PSA cards get better prices than SGC for older cards, so comparatively, that’s a good price. I’m not sure if it’s a good price in general, but if those are your only two choices and you’re satisfied with the look of the PSA 3 compared to the SGC 40, then go for the PSA card. The final two are in the same boat, one is a PSA 1.5 and the other an SGC 1.5 and both are $175, though the SGC has a make offer option, so it’s technically cheaper, just don’t know how much. You have to look at the conditions of these cards closely because the range of condition for the 1.5 grade can be pretty big.

There are two closed auctions, but I don’t know the exact prices because Ebay doesn’t give final prices on auctions that took the best offer, you just know the original asking price. An SGC 30 went for under $220 and PSA 1 went for under $150.