This is the first time that Bob Robertson has been in this feature, which is quite an oversight on my part. We shouldn’t go 500+ articles before getting to a player of his stature. Luckily, I’m going to make up for this mistake by including him in an upcoming Card of the Day article, though that one will be a bit different than this one. I was trying to decide between two cards for his first appearance and instead I said to myself “John, why not just use both of them?” I agreed with my idea and just picked his 1974 Topps to use first because I like the action shot. So here’s the first appearance by Bob Robertson, card #540 in the 1974 Topps set. 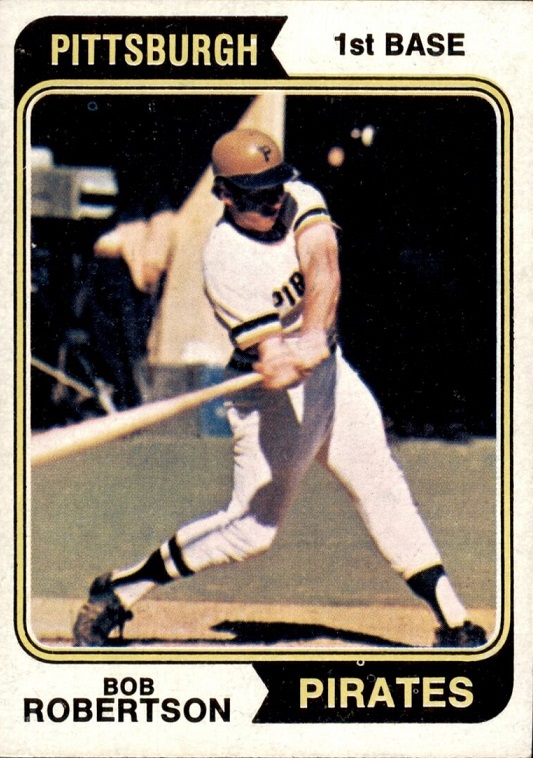 The 1974 Topps set has that odd combo of great action shots and poor photo quality. This card would be Exhibit A. This is an outstanding action shot of Robertson mid-swing, but photo quality has changed a lot since 1974, but honestly, the action shots got a lot better (compared to 1974) in the 1975 set and improved even more in the following years. This is one of those sets where Topps used the team colors as part of their front design, so the Pirates cards look better than all of the other teams (saying that with no bias), but in general, I’m a fan of this set design. When you add in the great Robertson pose to the front design, this should be a card that Pirates collectors want to add to their collection. It also helps that Robertson was a key member of a championship team, which will make any player more collectible. 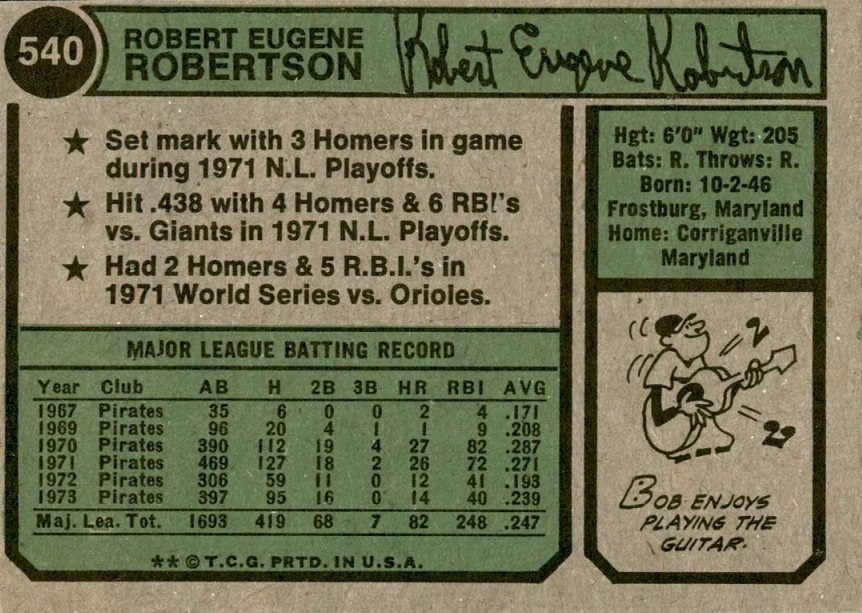 The back is both good and bad. This big scan is lightened a bit so the stats are fairly easy to read, but that green backdrop for the stats in sometimes a dark green and if a player has more stats, then they get smaller and tougher to read. The cartoons are a fun addition for boys and girls of all ages, as Topps made great use of their generic gray man this year. In this one, he’s making great music come out of a guitar with no strings. I assume that Bob Robertson enjoyed playing guitars with strings, but that’s just an assumption. Topps decided to add three fun facts about Robertson’s career rather than including minor league stats. You can find those in today’s history article because Robertson turns 75 today, so he has a new bio in that article, which still has that fresh new bio smell.

If you’re interested in this card you’ll be happy to find out that you have many choices on Ebay, including some high grade ones. I’ll start at the top. Someone has a SGC 9.5 grade, which is basically better than pack fresh, and that is $120. A PSA 8, which won’t look much different side-by-side to the 9.5, is going for $52.50. However, there’s a second PSA 8 and it is only $23. If you want a nice one, this is my recommendation, although there’s a PSA 7 for $10, so that’s not bad either. There are multiples signed auctions and they range from $13-$20, which isn’t bad because Robertson has a nice autograph. If you just want a regular card, then there are numerous auctions in the $2-$3 range, which includes delivery.