Hall of Fame pitcher James “Pud” Galvin played his last big league game on August 2, 1892 at 35 years old. He retired with 365 wins, which ranks fifth all-time. He also ranks second with 6,003.1 innings pitched and 646 complete games, only trailing Cy Young in each category. After the 1892 season finished, the Pittsburgh Pirates and a group of local/star players decided to hold a benefit game for the veteran pitcher as a send-off to celebrate his career and show appreciation by throwing some extra dollars in his pocket. On Monday, October 17, 1892, the players gathered at Exposition Park at 3:00 PM in front of an enthusiastic crowd to watch Galvin pitch one more game.

The pitching match-up this day was very interesting. Galvin was going up against Cannonball Ed Morris, who was his teammate during the 1886-90 seasons, but hadn’t pitched in over two years by the time this benefit game happened. The opposing team was filled with future and former Pirates/Alleghenys, including Ed Swartwood, who was the first batter in team history. He batted lead-off. Batting second was Hall of Famer Connie Mack, who at the time was a current player on Pittsburgh. Batting third was Tun Berger, a Pittsburgh resident who played for the Alleghenys/Pirates during the 1890-91 seasons. The clean-up hitter was Sam Gillen, another Pittsburgh resident who would make his big league debut with the Pirates nine months after this game. The fifth place hitter was Jim Gray, a Pittsburgh resident (imagine that) who played for the Alleghenys/Pirates three different seasons, four games total. If you want to read a lot on him, check out this link.

Batting sixth was Frank Haller, a lifelong Pittsburgh resident who played ten seasons in the minors, but this game was as close as he got to the majors. Tom Quinn caught and batted seventh. He played for the Alleghenys in three games during the 1886 season, despite being with the team all year. He was living at the time in…(checks notes)…Pittsburgh. Batting eighth and playing third base was Red Ehret, a pitcher who went 16-20 and threw 316 innings for the 1892 Pirates. Batting ninth was the aforementioned Ed Morris. The game was being umpired by Adonis Terry, who was acquired via trade for Cub Stricker, who came to the Pirates in 1892 in exchange for Pud Galvin. There was also a man named Charlie Mitchell umpiring. Unlike Terry, he was actually an umpire, who may or may not have unknowingly umpired his last National League game 16 days earlier.

One thing that’s interesting to note here is that many of the recaps and previews for the game called Galvin “Old Sport”. One of the popular misconceptions is that he was often referred to as “Pud” Galvin. Try searching old articles for that nickname, it doesn’t show up until 1895 for the first time, and only appears in a Newspaper.com search three times total before 1925, when a big story about him says that he acquired the nickname as a kid due to his “chunky physical structure”.

The actual amount Galvin received from this game is unknown, but four different estimates put it between $1,500 and $3,000. Whatever amount is was in that range, it was a lot of money for a baseball player to make in one day back in 1892. It was said that some people paid as much as $25 for a ticket and many people who bought tickets didn’t show up to the game, showing that they were just chipping in to show their appreciation for the great pitcher. The crowd was announced as being about 1,200 people.

There aren’t any full play-by-plays of this game because it was an exhibition game. We have the boxscore (shown below) which shows you that they played a full nine innings in a game that came down to the final out, with Pittsburgh winning 7-6 after the team dubbed the “Picked Nine” scored three runs in the top of the ninth off of Galvin. I should note that even though I call them the Pirates here, this game was only covered locally and the Pirates name didn’t get embraced locally until 1895. They were mostly being referred to as the Pittsburghs on this day, though the Alleghenys name was still in use (sparingly) as well. From three local game recaps, here’s as much as I could gather about this game, noting that one of the recaps said that the Picked Nine team outplayed Pittsburgh and won the game 7-6, which did not happen.

Adonis Terry batted for Tun Berger in the ninth inning and picked up a hit, which might be the only time you see an umpire collect a hit in a game. Ed Morris started the game by striking out Patsy Donovan and Duke Farrell, then didn’t strike out another batter over the next 22 outs. He pitched a complete game, with one paper saying that he looked good and another saying that it’s obvious why he isn’t pitching anymore, which was a bit harsh considering that he had a two-year layoff and this was an exhibition game.

There were fine catches in the outfield by Frank Haller, George Van Haltren, Ed Swartwood and Elmer Smith, with Haller’s being recognized as the best, catching a low line on a full sprint. Swartwood made a strong throw from right field to cut down a runner trying to score. Red Ehret apparently had no business being at third base, but he delighted the crowd with some antics every time he completed a play. He made four errors on seven chances, so that wasn’t often. Tom Quinn and Bobby Cargo had three hits each. What’s really interesting about that is that the pair didn’t even combine for three hits total during their time with the Alleghenys/Pirates. Quinn had none in three games, though he had a hit wiped away in a late game that didn’t reach five innings before it was stopped/canceled due to rain. Cargo had just one hit in his big league career. Connie Mack also added three hits. All 20 hits in this game were singles. Cargo, who committed four errors in his final big league game ten days earlier, was praised for his defense and it was said that he hit the ball harder than anyone this day.

Here’s the boxscore, with one note at the bottom: 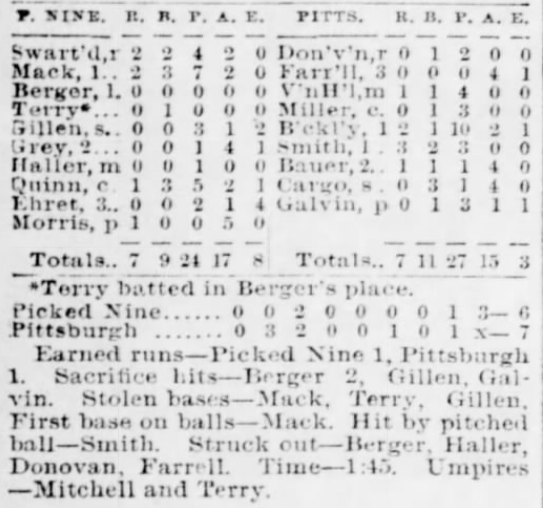 This boxscore says it took an hour and 45 minutes to play. Another boxscore says that the game took two hours and ten minutes. Either way, it went quicker than anything you’ll see now. I probably should have included the other boxscore because they spelled “Gray” correctly and didn’t mistakenly put seven runs in the Picked Nine’s total, but this one had the note about Terry batting for Berger, which the other didn’t.