Today is the first time that Bryan Bullington is featured here. I know most Pittsburgh Pirates fans don’t remember him fondly through no fault of his own. He was drafted first overall in 2002, then immediately talked down by General Manager Dave Littlefield. The story got a little out-of-whack as well when people started claiming that he was called a future fourth starter and Littlefield rightly (for once) was just pointing at that potential aces in baseball were rare and Bullington wasn’t that type of pitcher. Unfortunately for Bullington, he needed Tommy John surgery right after his big league debut and that cost him the entire 2006 season, followed by him being unable to replicate his Triple-A success from 2005 that got him to the majors. He ended up pitching 26 big league games over five seasons before having plenty of success pitching in Japan.

The funny thing about that 2002 draft is that Bullington actually had a better big league career than three of the other top five picks, so somehow it could have been worse. Second overall pick BJ Upton had 16.8 career WAR over 12 seasons, so on paper he would have been a solid pick, but he was an awful team player, who showed his effort in spurts and was constantly complaining about something, so I was never mad that the Pirates didn’t take him instead. In retrospect they could have traded Upton and got something in return before he hit the majors, which I would have been fine with if that happened. The real value that year came from sixth overall pick Zack Grienke (73.5 WAR and counting), and for a time, seventh overall pick Prince Fielder (23.8 WAR).

Despite his Pirates career not amounting to much, Bullington came around at the right time for baseball cards. There were plenty of great options for this article, but I went with the 2003 Topps 205 set, which was a tribute to the 1911 T205 set, which is still very popular to this day. 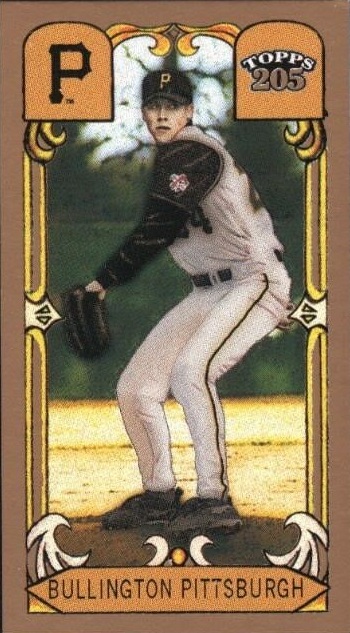 The original T205 set is known for the artwork, which is mostly portrait style pictures, and for the gold borders. In fact, it’s often referenced as being the T205 Gold Border set. As you can see above, the Bullington card is not a portrait style, but there’s a small/popular subset in the original T205 set that featured minor league players and all of those cards were action poses. With Bullington being in his first full season of pro ball in 2003 when this card was released, he would obviously qualify as a minor league player. The design on those minor league cards was a little more ornate, and Topps used that same model during their 2003 set. I’m a big fan of action shots and the T205 minor league subset, so this is a great looking card to me. The fact that it has a Pirates player is just an added bonus.

One other note here and it’s about the card shape. The regular cards in the set were more of the standard card size that we are used to today. This is a mini version, which is also the same size as the original T205 cards. I don’t know if the look was more desirable when these cards came out for new collectors, but anyone who collects the original cards would like the mini version better. This card is also a bit harder to find, though the rareness makes it more likely that someone will list this card separately, as opposed to the common version (more on this in the price section below). 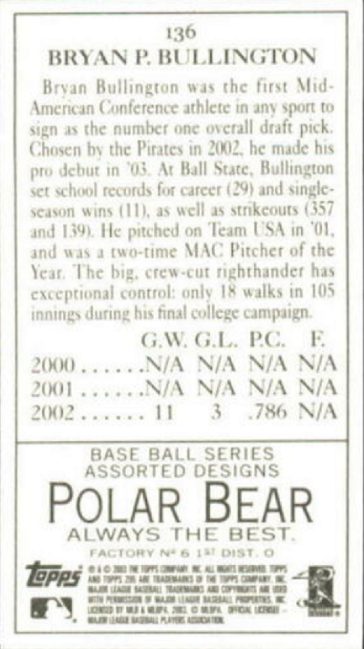 I like that Topps didn’t stray from the original setup of the T205 set. The only real difference is all of that legal nonsense they need to add at the bottom, plus the card number at the top (T205’s weren’t numbered). If you are familiar with the original set, then you know that these cards had a write-up for each player and four categories of stats over the last three years if available. There are different brands of backs in the original and the new set. This one is for Polar Bear pouch tobacco, which has been out of business for many years, so it was okay to include it on a new card. The Polar Bear design in this set is a bit disappointing because Polar Bear had such a great design in the T206 set issued right before this set. The T205 set had the bio and stats, so it was a fair trade-off in my book.

This card is fairly easy to find on Ebay, which is a little surprising to me considering that his big league career outside of Japan didn’t amount to much. There are 24 of his 205 cards on Ebay right now and at least nine are his mini cards, while a few of the auctions are the choose-your-card setups where all of the cards are listed in one auction and you need to use the dropdown screen to find your specific card. I didn’t check all of those, so there could be more of the minis. Of the other nine, the price ranges from $1.98 delivered to $7.26, with most of the cost on that final one being the high shipping price. The common version of this card (squarish look) has about the same price range, except for two cards. There is an autographed one for $14 and a graded one that got a 10, and that’s going for $19, with a best offer option.