Today’s Card of the Day features Ken Macha, who is probably best known as a former Major League manager. He also spent six years in the majors as a player, including his first three years with the Pittsburgh Pirates, who drafted the Monroeville native in the sixth round out of the University of Pittsburgh. Between the birthplace, school and MLB time, he has quite a local connection for fans from Pittsburgh. Macha turns 71 years old today, so what better day than today to feature his only Topps card that shows him with the Pirates. Here’s his 1978 Topps card. 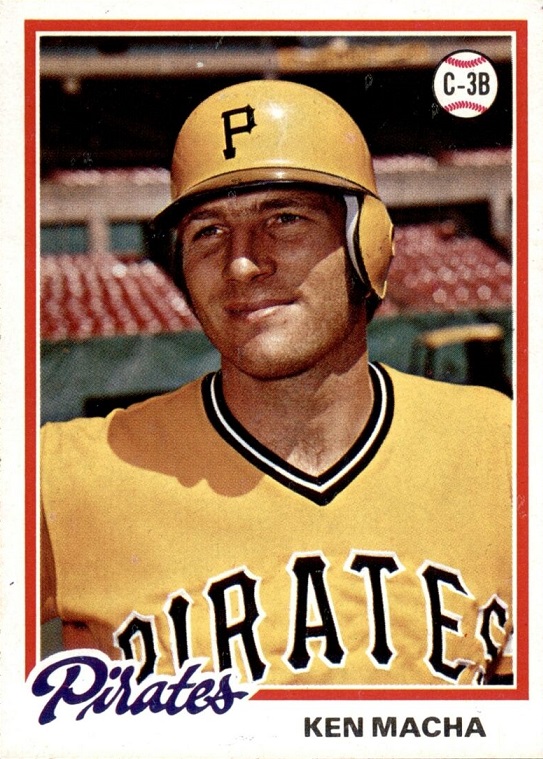 It’s amazing how many times I’ve featured a set that I really don’t like at all. The 1978 Topps design is one of the worst ever for Topps. It’s boring and colors don’t match up to the team colors, which is sometimes a saving grace for the Pirates cards in the set. Instead, the Pirates players got a red border around the photo and the team name in purple. The player name looks like it was added as an after thought and the baseball position was done many times before with numbers on the back of cards.

This is the ninth time that I have featured a card from this set here. Some were multi-player cards, and one was a special Chuck Tanner card, but it’s still been used here a lot for a set I can’t stand. In this case, it was unavoidable unless I just ignored Macha and used someone else. That’s okay because I like being reminded how bad the set is, but also I like looking at the mix-and-match uniforms of the era. The gold jersey and gold helmet provides a lot of gold, but they look good here.

What’s really interesting about this front is Topps choice for his position listing. He didn’t catch a single game in the majors in 1977, and he caught just eight minor league games. Most of his playing time came in the outfield that year in the minors, so even if they were looking at his minor league records, that should be the main position listed. He played just as much first base in 1977 as he did third base. 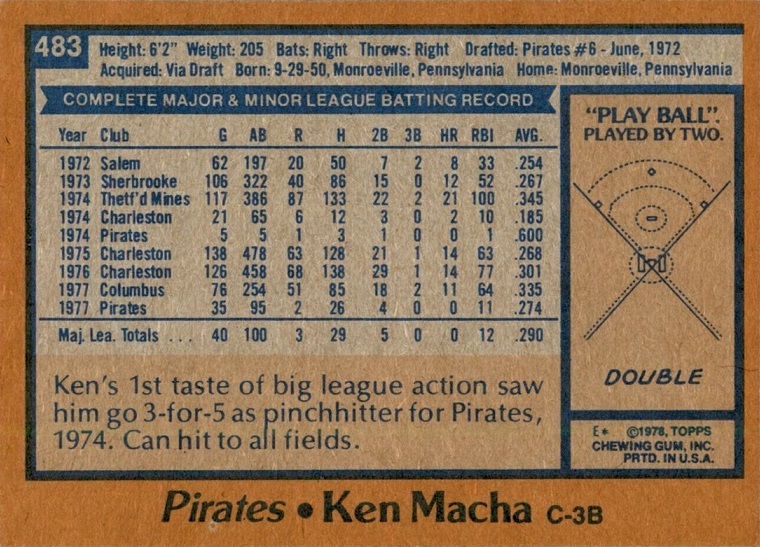 The backs of these cards are awful colors too. The highlights of the 1978 backs are the game situations found on back. I’ve mentioned it a few times before, but the quick rundown is that there are different baseball situations on the backs of cards in the set and you played a game versus a friend with a stack of cards. This “double” on the back of Macha is obviously one of the better outcomes if you’re on offense. The rules to the game were printed on the back of certain cards, which is slightly amusing when you realize that people were first opening these packs and had no idea about the game until they got one of the cards with rules. You can see that here in the Jerry Reuss article.

This card is easily found on Ebay (86 active auctions) and almost 20 of the cards up for auction are autographed. Apparently, this is a popular card to get signed. If you want one of those, the average price is in the $12-$15 range, with some lower priced ones that look just as nice. There’s a PSA 7 for sale for $11, which I’m sure looks really nice for a card graded 7 because there’s no reason to spend the grading fee for this card unless it’s a 9/10. So whoever sent it in thought that they were getting a higher grade. If you just want a basic Macha card, you should have no trouble getting one in the $2-$3 range delivered. I don’t link to Ebay auctions here ever, but I had to do this one. In 2015, Topps included older cards that were stamped Topps Original Buyback and it was supposed to be something special to get one of those cards. Here’s a 1978 Topps Macha, which is fine to include in the buyback promo, but look at the condition of the card. Quality control should have put that card out of its misery.