I have only used a couple of cards here that didn’t show players on the Pittsburgh Pirates, or at least have the team name Pirates on the card, even if they were in another uniform. Today is the birth date of Louis Bierbauer, the man who is credited the most with the Pirates being named the Pirates.

I have mentioned numerous times that saying the Pirates switched from the Alleghenys to the Pirates in 1891 is extremely lazy, but it also avoids a confusing timeline of events. The Alleghenys name would be correct for the early years because that was actually part of the team’s real name. In 1891, the actual name of the Pittsburgh Pirates was the Pittsburgh Athletic Company. In the simplest terms, the team was dubbed the Pirates because of how they signed Louis Bierbauer after the 1890 season when the Player’s League ceased to exist and players in the league went back to their old teams. Bierbauer’s team didn’t reserve their players, so he was able to become a free agent long before free agency existed. The action of Pittsburgh in signing Bierbauer was deemed to be “piratical” and the name stuck, just not locally.

The name Alleghenys was still used more than any other name in 1891 and for a time afterwards. They also occasionally used “Allies” which was just a shortened version of the name. When Ned Hanlon was the manager, they were called the Hanlons. When Bill McGunnigle took over, the got the nickname “Pets” because he ran practice with a whistle. The name Pirates was used almost exclusively by outside reporters and not even from every town, just a few that ran with the mocking name. The only time you really saw it in local print was when they were sharing wired game recaps from road games. In 1894, the team went by the name Braves all season. It started in 1893 and carried into the early part of 1895, when they became the Pirates in all local publications. However, that wasn’t a straight line until now. In 1898, manager Bill Watkins renamed the team the Patriots and changed the team colors to red, white and blue. If you’re going to share the team name “fact”, you need to include that “Pirates” took over in 1895 and was completely dropped in 1898, then came back in 1899.

The name Pirates wasn’t original for Pittsburgh in 1891. Other teams had that name. In fact, the 1890 Chicago Player’s League team had the nickname Pirates. In 1889 a minor league team in Toledo was named the Black Pirates, and that nickname was used in 1890 when they were in the American Association. So there were two Major League teams with that nickname in 1890. It was not original. They were just the next team to get that nickname, they stayed around while the others ceased to exist, and then they eventually embraced the name. You could tell that story, or you can just skip my shortened version of the story and say that they’ve been the Pirates since 1891 because of Bierbauer. Whatever works for you. Either way, he’s attached to the team name, and if you want a card of him then you need to go with a card that shows him on the Philadelphia Athletics. The only Pirates option is an 1898 Cameo Pepsin Pin, and that’s exactly what it sounds like, a pin. It’s a small pin, but it shows him with the Pirates, even if his last year with the team was 1896. I’m going with the card, which is this 1888 N172 Old Judge card shown below. 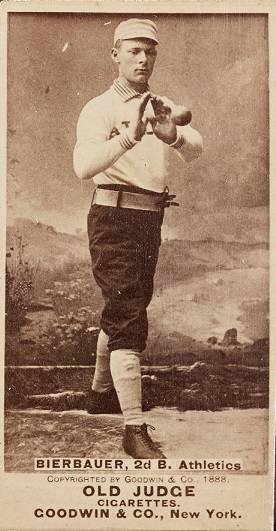 We have featured the Old Judge set here multiple times in the past because it’s my favorite set. It has over 500 players, many of them only showing up in this set. They have no other cards during their career, so there’s a few player who we only know what they look like because of this set. Bierbauer has six different poses in this set, which was painstakingly cataloged many years ago, but new poses are still being discovered now because some of the cards are one-of-a-kind due to attrition.

This particular card has been cataloged as “28-2, catch, hands at chest” The “28” is just where he falls alphabetically in the set, the “2” is his second pose (just happened to be cataloged in that order) and the “catch, hands at chest” is a basic description that every pose has on the checklist. Almost all of the cards were staged action photos in a studio, and some had a backdrop showing outdoor scenes, such as what you see behind Bierbauer.

You can’t tell by the sepia toned photo, but the uniform has a lot of blue here, both light and dark. The pants are dark blue, as is the team name across the front, which is mostly blocked off here by the pose. The socks, belt, cap and collar all have a light blue.

When this photo was taken, Bierbauer was just 22 years old, starting his third season in the majors, and it would be one of his best years of his 13-year career. He batted .267 that season, with 80 RBIs and 83 runs scored in 134 games, while leading all second basemen in assists, something he did five times during his career.

If you’re interested in this card, then just know that finding a particular pose might be a very difficult task, but it’s not impossible to find one of his six poses. One of them is a two-player pose and those command a premium, so you’re better off not getting your hopes set on that card unless you have no problem plunking down $500+ for a low grade copy. Bierbauer is somewhat sought after because of the Pirates team name story. He wasn’t a star player by any means. His highest season WAR was 2.9, and he had a few below average years mixed in, giving him a career WAR of 13.9, or an average of just over 1.0 per season. He’s priced just over commons in this set, which usually go for about $200 in Very Good condition. The term common here counts for both the quality of the player and the quantity of his cards available. Bierbauer is easy to find compared to most players, but that just means that approximately 100 of his cards exist total between the six poses. Expect to pay around $350 for one of his cards in that Very Good (PSA 3) range.