One year ago today on his 90th birthday, we featured Pittsburgh Pirates outfielder Dick Hall in our Card of the Day series on his 1955 Topps card. On his 91st birthday today, we feature Pittsburgh Pirates pitcher Dick Hall on his 1956 Topps card. Hall came up to the Pirates as an outfielder, but during his fourth season in the majors, he became a pitcher. He finished his career with a .530 OPS and 495 games pitched, so he made the right decision. His big league career would have likely ended ten years earlier if he never took up pitching. I’m a fan of the 1955 Topps set, but I’m a much bigger fan of the 1956 set, so here’s a look at card #331 from that set, featuring Dick Hall. 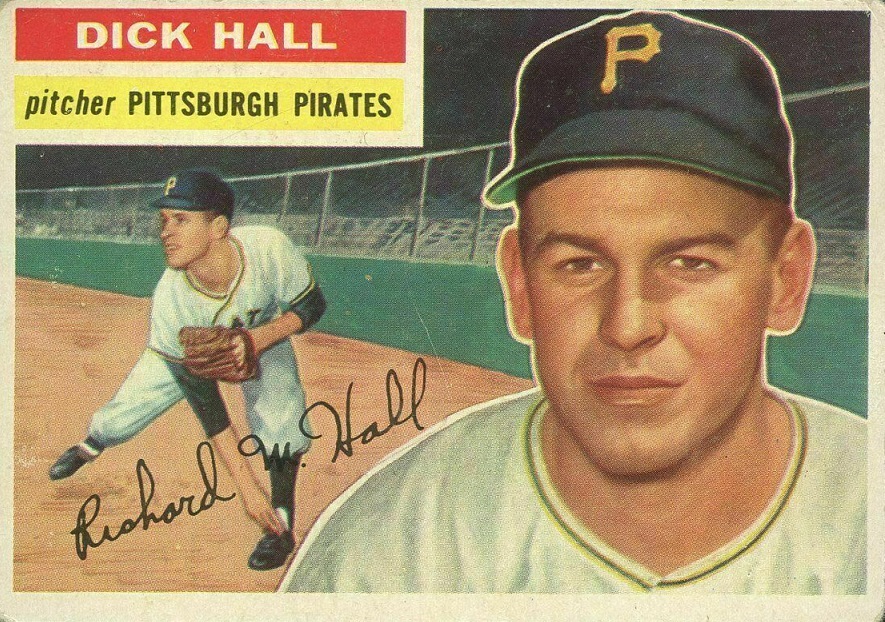 The 1956 Topps design is in my top three Topps designs all-time, and it’s possible that it’s in the #1 spot, though I’m not willing to commit to a set list because my favorite seems to change often. I love the horizontal layout with the action photo in the background of the portrait style photo. This particular card is one of the more boring ones because it’s a staged action photo, but if you scroll through scans of this set, you’ll see some amazing background action. The Roberto Clemente and Mickey Mantle are two of my favorites, but there are plenty of other great ones. One really interesting thing here is that the portrait part of this card is the exact same photo that Topps used for his 1955 card. That happened occasionally with these two sets, including the Clemente card. 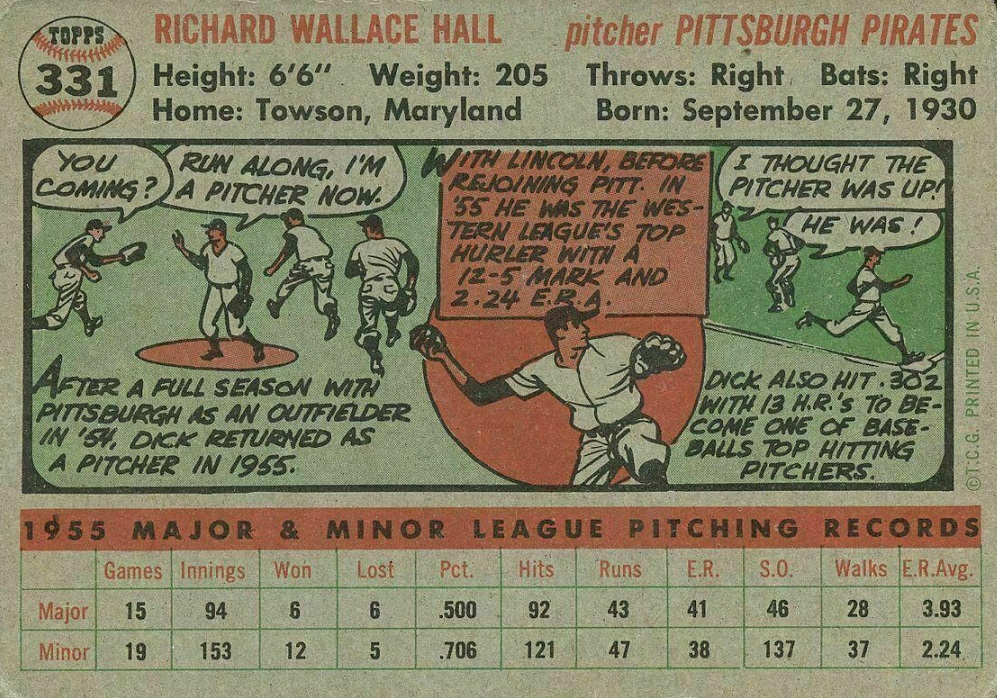 The backs of these cards are almost as good as the fronts. I’m a big fan of the color combos used here and the cartoon bios. In general I’m not a fan of one year of stats on the back of cards, though older cards get a pass, but this here is an odd combo because they went with both his minor league stats and Major League stats from the 1955 season. Usually it would be the 1955 season and career stats. Hall played three years in the majors prior to 1955, but it wouldn’t make much sense to include hitting stats instead. The cartoons above tell the story about his switch to the mound. The part about him being one of the top hitting pitchers would be true in some later years, but he was basically the same hitter in the majors as a pitcher, which is why he made the switch to pitching in the first place. There were high points though, such as 1963 when he batted .464 in between seasons of hitting .167 and .125 for the Baltimore Orioles.

If you’re interested in this card, you’ll be happy to know that it’s easy to find in any grade within reason (there’s not a ton of mint condition examples out there). This set is very popular, so it trades heavily on Ebay. There are currently just under 170 live auctions for this card ranging in price from a $94 PSA 8, down to a $4 (delivered) example that has been well loved over the years. A PSA 8.5 ended for $116 recently, and a PSA 8 ended for $106, so that active auction doesn’t seem like a bad price, though a PSA 8 also ended for $83 recently, so the active one seems more like a middle ground price than a great price. My opinion, you’re going to want to pay in the $10-$15 range and have a nice looking mid-grade example, but if you have the money to spend, these cards look amazing in high grade. That also plays well for budget collectors, where a $5 example fits better for you. You’ll still be getting a great looking card.