Steve Buechele played for two Pittsburgh Pirates playoff teams, though he didn’t even spend a full calendar year with the Pirates. They acquired him from the Texas Rangers on August 30, 1991 in exchange for pitchers Kurt Miller and Hector Fajardo. He signed with the team as a free agent over the 1991-92 off-season, then was traded away on July 11, 1992 to the Chicago Cubs for pitcher Danny Jackson. Topps managed to get a great short of Buechele at the end of the 1991 season on his new team and they included it in their 1992 set, which is today’s Card of the Day subject. 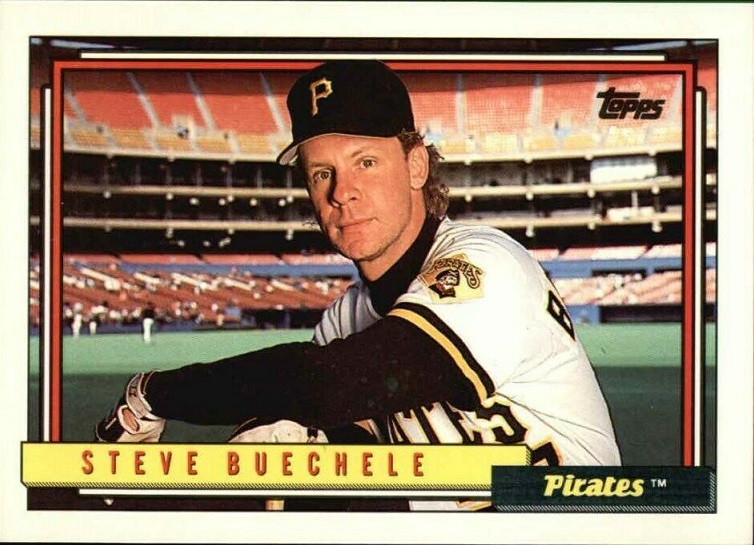 Not many cards in the 1992 Topps set have the horizontal layout, which automatically makes those cards stand out from the rest. The choice to use that layout gives you a great panoramic shot of the stadium in the background here. I also like that the photographer got a great shot of the Pirates logo on the sleeve.

These cards have a bright white border that really stood out for that time, and they used team colors for the boxes for the player name and team name. The red letters for the name work well with the photo frame that’s inside the photo, but the team name in yellow that’s inside a black box looks better. There’s also a gold version of every card from 1992, and that’s basically the same exact card, except with a gold foil for the name/team (including the boxes). It’s much tougher to find than the normal base card, but overall it isn’t hard to find because they printed a lot of cards this year. 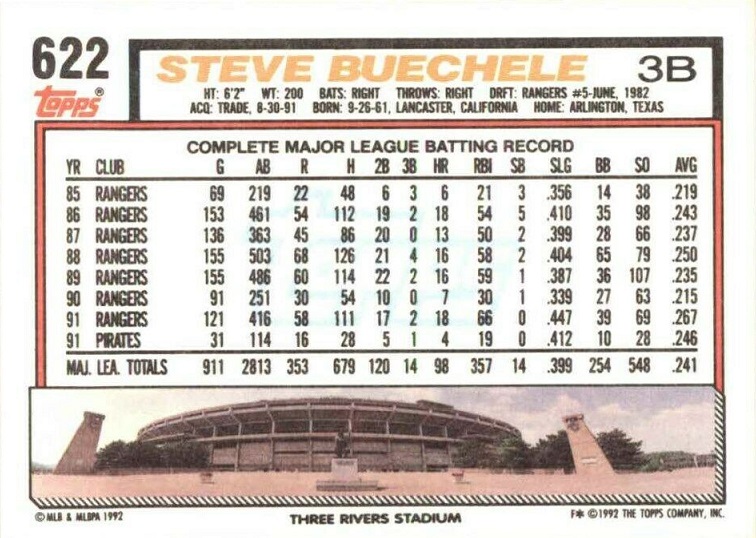 Topps decided to just go with Major League stats here, which I don’t mind because it adds the room for a second panoramic style stadium shot on the back. This one is the outside of Three Rivers Park. That’s something different here and it works well. Again you’ll notice the bright white on the back of the card, just like on the front borders. I really appreciate that they went with the black writing on the white back, which makes the stats easy to read, even when the player had a long career up to that point. One thing you might not notice right away here is that in the middle of the stats, the logo for Topps appears in a very faint blue. It takes up nearly the whole stats space from at-bats to RBIs, but it doesn’t interfere at all with the stats.

You know the drill by now with common cards from this era. This one is plentiful on Ebay, with 66 auctions currently up, giving you numerous options in the $2-$3 range, which includes delivery. There are seven autographed copies up, all of them $17 or less. Interesting pattern with those cards seems to be his propensity to sign in dark ink  across his forearm with the black undershirt. That obviously makes it harder to see the autograph. There are also a large handful of gold versions, as in 23 active auctions. You can basically get those for the same price as the regular card, even though they’re tougher to find. There’s one graded auction, which is rare because the cards only have real value if they get a 10 grade, as that’s not an easy thing to do. That one graded card on Ebay is a BGS 9, and they want $16 for it, which won’t likely happen. Finally, the most interesting auction is a gold version that is autographed, and it’s one of the better autographs for him in this set. That is the highest priced one on Ebay, going for $16.99.