The Card of the Day almost always has something to do with the history article from the same day. Today is a rare stray from that model. I looked at the list of players born on this date and then just decided to use someone else. I then looked at the 1979 Pittsburgh Pirates roster and chose the first name that came up of a player who hasn’t been used in this feature before. I thought Dale Berra was here before once, but he hasn’t been, so here’s his first Card of the Day appearance. I went with the 1982 Fleer set because the pose caught my eye while scanning available cards. I noticed it for both good and bad reasons. 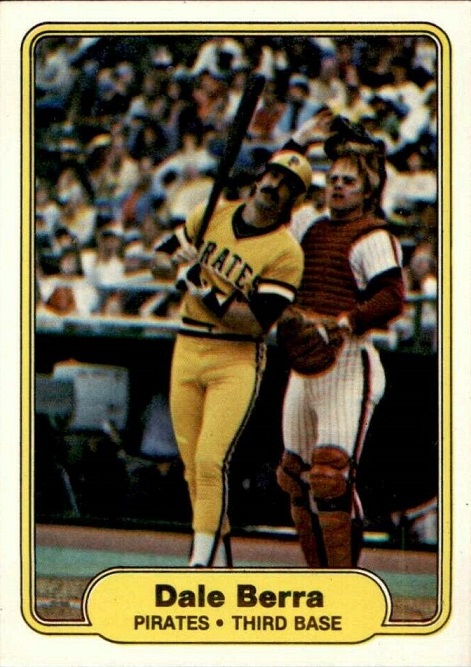 The front is a great action shot of what appears to be Berra and the Philadelphia catcher (looks like Keith Moreland) watching a foul ball. I like that Fleer used team colors on the front here, so with this particular uniform Berra is wearing, the colors match up to the uniform perfectly. As you can tell by looking at the photo, it’s not the best picture quality. What’s interesting about this card is that this is probably the middle ground for photo quality of Berra in this set. Looking through scans of just this card, some are clearer, while there are others that are fuzzier as well. That’s one thing to be careful of here if you plan on buying this card, though I’ll note that there’s a segment of collectors who look for printing anomalies, and one of those really blurry photos might appeal more to them. 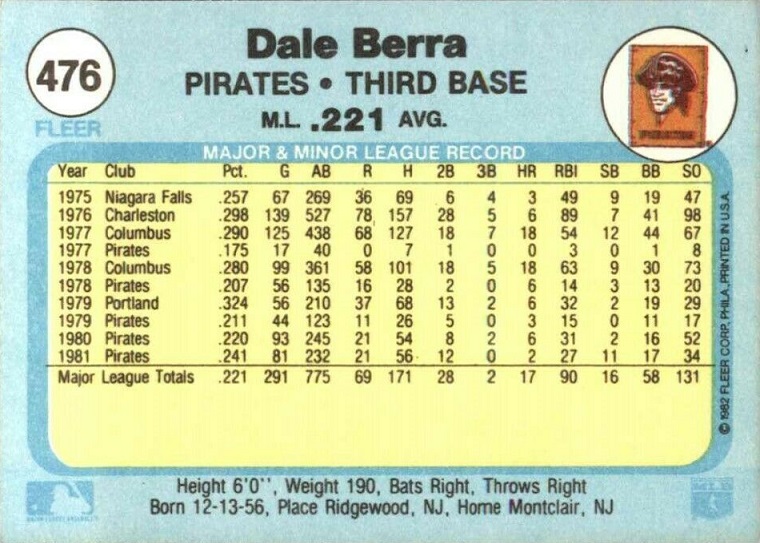 There’s one thing on the back of the 1982 Fleer cards that always made me wonder. Why do they have the player’s big league average so big under their name. It’s a stat that’s already there, so why repeat it, why not feature a stat that isn’t on the card in that prominent spot? That question has a part B and part C. Part B is why do they call the average “Pct.” in the stats section? I know what it stands for, but why call it an an average in one spot and a percent right below it? Part C is why would you use the abbreviation “M.L.” to differentiate between Major League averages and his minor league average? They both could be M.L., so how does that help?

After focusing in on the blurry front, I decided to use this particular back scan because somehow the Pirates logo is fuzzy in the top right corner. It fits perfectly here with that front. When it’s not fuzzy, the Pirates logo on the back is a nice addition to this card, pairing well with the use of the team color on the front.

If you’re interested in this card, then it will cost you about $2-$3 delivered, with multiple sellers in that price range. Some sellers have more than one card, but there are 33 individual auctions up right now for this card. Two of them are autographed, one much nicer than the other. The nicer one is going for $10.50. The other is $7. Only two 1982 Fleer Dale Berra cards have sold on Ebay in the last three months.