Finding a 2010 baseball card in our Card of the Day series was an impossible task until just a few days ago when we looked at a card of Robinzon Diaz from the Topps set. I’m sorry to all of those fans of 2010, taking 18 months to feature one card from the year is an unforgivable oversight. So to make it up, here’s a second card from that year, and it’s from a different set, which means that this is the first time that we are looking at the 2010 Upper Deck set. We go with Jeff Karstens for today’s article. He pitched for the Pittsburgh Pirates from 2008 through 2012. He was also born 39 years ago today. 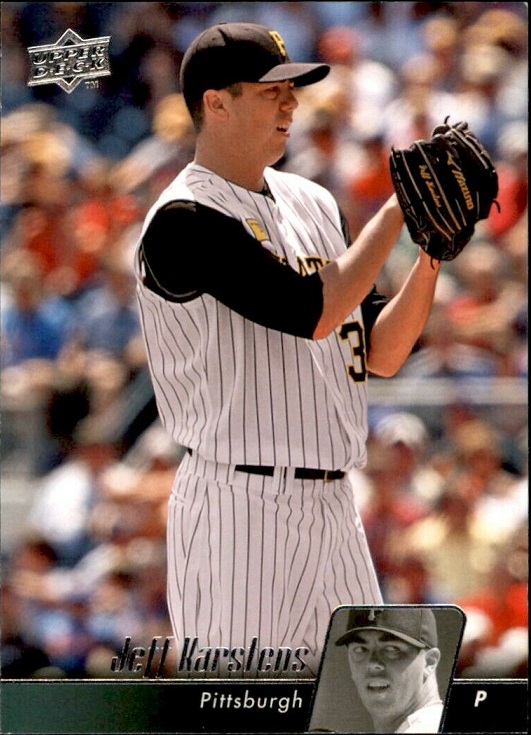 The first thing I noticed on this card is the (mostly) borderless design. I would rather have cards like this, than a poor front design, but the borderless cards don’t compare with great sets from the past like the 1962 or 1987 Topps designs. This front design isn’t bad though, because I like the silver foil writing for the name/Upper Deck logo, and they added picture is a nice touch. They second thing I noticed wasn’t quite as obvious, but it really stands out once you see it…or rather, don’t see it. The word “Pirates” isn’t on this card. Spoiler alert, it’s not on the back either. His arm is blocking out a large portion of the team name on the front of the jersey. Karstens plays for Pittsburgh according to the card. They also don’t use the team logo on the card on either the front or back. That’s because Upper Deck only had a contract with the players and not with Major League Baseball or the teams.

Here’s a question for the comments. Who likes the look of this particular jersey/uniform style? 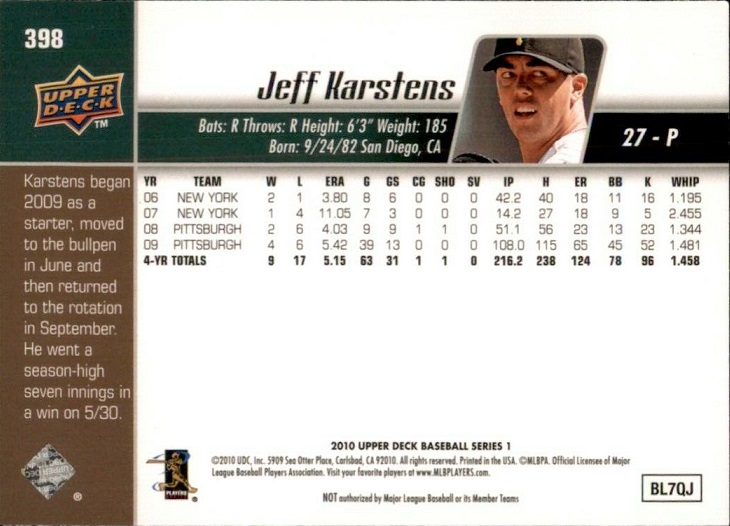 The back adds another photo of Karstens, but not really. It’s just the same photo that’s on the front, except it’s in color. Notice that the stats have just big league stats, despite plenty of room for his minor league career. They also list Pittsburgh and New York as the teams. Pittsburgh isn’t confusing, but the New York for those who don’t know, is for the Yankees. However, there’s nothing here that differentiates between the Yankees or Mets, so you would have to know to be sure.

The small print on the bottom tells you that this card is officially licensed by the Major League Baseball Players Association, then below it reads “NOT authorized by Major League Baseball or its Member Teams”. Off to the left side of those words is the MLBPA logo. There’s also that hologram all the way to the left that Upper Deck was famous to adding to cards for authenticity sake. Reprints of cards became a problem in the late 1980s, though most could be told easily by a seasoned collector. The hologram made it impossible to just print your own card because it was physically added to the card, not printed on.

This is an obvious common card and there are about 15 examples for sale on Ebay right now (some dealers might have more than one available). You can find it for around $2 delivered. There are three auctions of note. Two of them are autographed cards (not from the factory) about both of them are fairly cheap. One is $6.99 with a make offer option and the other is $3.50 delivered. The other auction is a gold version of this card, which is numbered to 99. That one is going for about $10 delivered, though the seller has a ridiculous shipping charge that brings it up to that price. Happy collecting!