The 1985 Topps set is one of those sets that I like the Pittsburgh Pirates cards more than the rest of the cards in the set. I’m not talking about being a Pirates fans and those are the players that appeal to me more. I mean that it’s a year that Topps adjusted the front design based on the team that the player represented. Today’s featured player is Jim Morrison, who probably should have been in this series by now. He had a 12-year career in the majors and half of it was spent with the Pirates. I chose the 1985 Topps card for today because of the eye appeal, as you will see below. 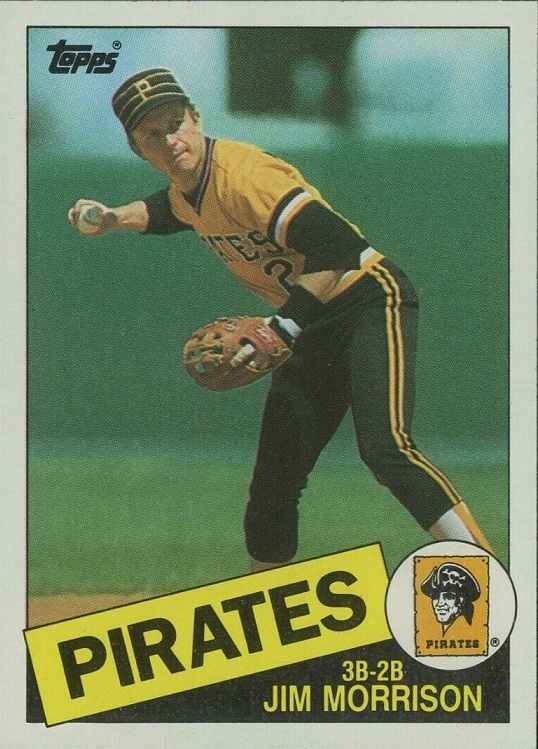 This particular scan came from a card that was graded PSA 10, so the actual card looks pack fresh like it did back in 1985, though I’ll note that not every card you pulled from packs would get a PSA 10 grade back then. From the mix-and-match uniform era for the Pirates, this combo is my favorite. The black pants, gold top and black pillbox hat give us the perfect uniform. So right off of the bat, that helps this card. However, these 1985 Topps Pirates all look great because of the front design, with the team colors for the team name in a banner, with the color combo reversed at the bottom for the player name and team position. Next to that is my favorite team logo. That’s where the eye appeal for the entire set comes into play. Not every card in the set has those color combos, and not every team has colors that are great matches for their team because they don’t have two primary colors.

Just to show how great the look of this card is on the John scale of baseball cards, I am thinking about getting a copy off of Ebay as I type this sentence. I have the entire 1985 Topps set already, plus a separate Pirates team set, so I have at least two copies of this card. I also have a box of commons (probably around 700 cards), where this could be in the box. I haven’t looked through it in years and it’s kind of buried under a lot of other cards. Yet, I still might buy another before you read this article.

As a side note, it’s been since November 1, 2020 that I featured a 1985 Topps card in this series. That’s way too long between posts about this set. 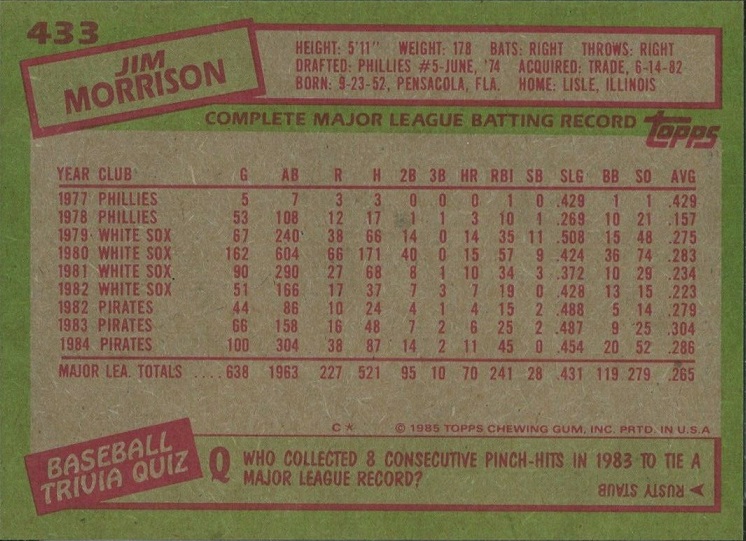 The backs of 1985 Topps are a far cry from the front. The off-green and pale red on light gray background doesn’t have a ton of eye appeal. It’s almost like a faded Christmas card. They didn’t include minor league stats here, which would have added seven lines of stats for Morrison, who spent four straight seasons in Triple-A before playing all 162 games during the 1980 season. Players who didn’t have a ton of MLB stats at the time ended up with a trivia question at the bottom. I read the answer before the question, so I’m not sure if I would have got that or not.

As I said up top, this scan is from a PSA 10 auction and the asking price is $255. Part of the high cost is the fact that not many people are out there grading common 1985 Topps cards, so there aren’t a lot of PSA 10 Jim Morrison cards out there. The problem with grading those cards is that if it gets anything less than a 10, you won’t get your money back. The perfect example is the PSA 9 currently listed for $10.99+ shipping. When you add in the grading fee plus Ebay fees to sell it, you’re talking about no return on that investment, if it even sells for the asking price. The other way to look at it is that it’s like buying a scratch-off lottery ticket. If you get that 10 grade, you will get a nice return, but if you get anything less, it’s like coming up empty on the scratch-off ticket. Maybe you lose $1-$2 looking for the big payout. Anyway, there are quite a few of these cards on Ebay right now and you can get them for $2-$3 delivered from multiple sellers. There are also a handful of autographed copies, with three of them going for under $10 delivered.