Today’s Card of the Day comes from the 1991 Donruss set, one of the junk wax era sets that was massively overproduced. This is the first time that we have featured this set here. Wally Backman spent one season with the Pittsburgh Pirates, not even a full year with the team, signing on January 31, 1990 and becoming a free agent on November 5, 1990, but he had a lot of baseball cards due to the timing. Just in general, that time period had numerous sets to choose from, but seeing as he signed in January, he was included in that updated/traded sets put out after the regular sets from 1990 lost their luster. That gave collectors something new without waiting for the 1991 sets to arrive. Since he didn’t sign with a new team right away, all of his 1991 cards pictured him on the Pirates as well.

So you may wonder how I settled on the 1991 Donruss set to use for Backman’s first time in this series? It was the photo. Just a strange in action shot that stood out while scrolling through Ebay looking for a choice. Also the logo. It definitely wasn’t the set design, which looks like it was something straight out of Saved By the Bell. For your viewing pleasure and baseball card knowledge gathering needs, here’s a look at the 1991 Donruss card #177 featuring Wally Backman. 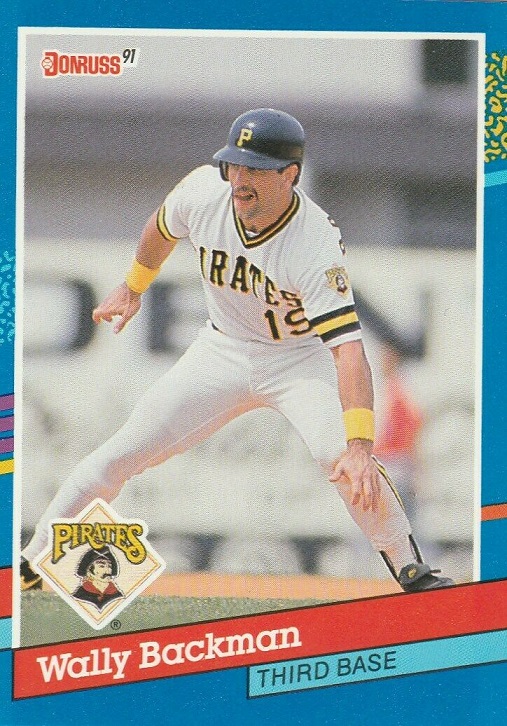 There’s the pose/photo I mentioned, which sort of looks like someone just called an impossible combo on Twister, but he’s trying to do it anyway. I’m a big fan of the road jerseys in general but the 1990 home whites look good here and the gold colored wristbands are a nice touch. What I like here is that Donruss put the Pirates logo on the front of the card. That is one of the better (not best) logos for the team in my opinion so I always add bonus points when sets include it. Another nice added bonus in the photo is seeing the same logo on the left sleeve.

The card design has a very early 1990’s appeal to kids/teenagers look to it. Donruss just placed random stripes and what not (looks like a colorful petri dish under a microscope) in all different colors around the border. This probably worked in 1991, but it doesn’t have lasting appeal. More like something that people who grew up then look at and say “ugh, I remember that era, what were we thinking”. The 1992 Donruss set design strayed far away from this set. 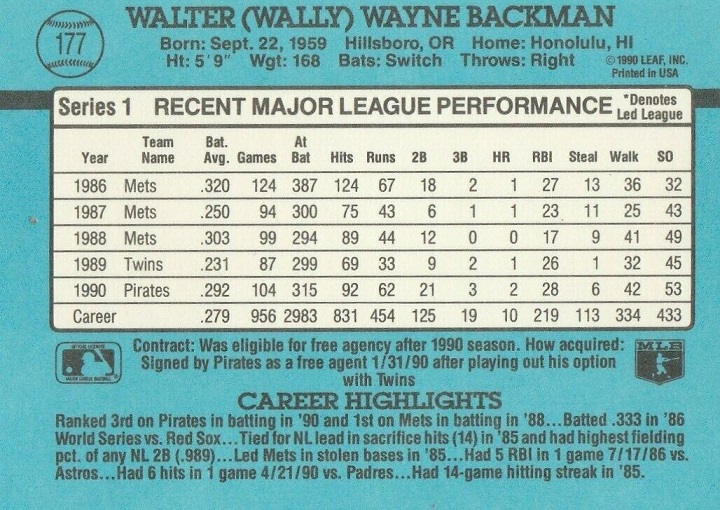 Donruss was very unoriginal when it came to card backs. They found something that worked for them and they stuck with it. If you’ve seen Donruss backs over the years, you’ll probably recognize this one, or at least think you do. It’s basically the same back they used in 1986 and 1988. It’s sort of the same back they used a lot, but those two years had a very similar blue color. Donruss used a maximum of five years of stats on the back, which worked well for players with 1-5 years of stats, but Backman already had 11 seasons in at this point, so you don’t even get half of his stats. I’ve mentioned this before, but one of the best things about Donruss cards from this era is that little “contract” section below the stats and above the career highlights. I’ve had to reference those a few times when I couldn’t find the contract information for player bios in our daily history articles. It was literally the only place I could find the info in some cases.

The price section will be a quick one today. This is a basic common card, where you’re paying about $2 delivered, with the cost being that much to help cover shipping and Ebay fees. There are two autographed copies available, one for $9, one for $18. He’s got a nice autograph, especially compared to the scribblegraphs of current players. The only other auction of note is an unopened rack pack with Backman on the top, as well as a Bob Walk card showing.