Today’s Card of the Day comes from a pitcher who turned his career around with the Pittsburgh Pirates, though the timing of his arrival also helped. Max Butcher played seven seasons for the Pirates, coming to the team from the Philadelphia Phillies in an even up swap for first baseman Gus Suhr. He stayed with the Pirates through the 1945 season, then was released during Spring Training in 1946 when he wouldn’t sign a contract that called for a $3,000 pay cut. He remained with the Pirates during the war years when teams were losing players to service all of the time.

Butcher averaged nearly 170 innings per season during that time, and over his final five seasons, he never had higher than a 3.12 ERA. Prior to coming to the Pirates, he had a 28-46 record over four seasons in the majors with the Phillies and Brooklyn Dodgers. He had a 67-60 record with the Pirates, lowering his ERA by more than a full run over his previous totals. Not too long after he joined the Pirates, he was in the 1940 Play Ball set, which we look at in today’s article. 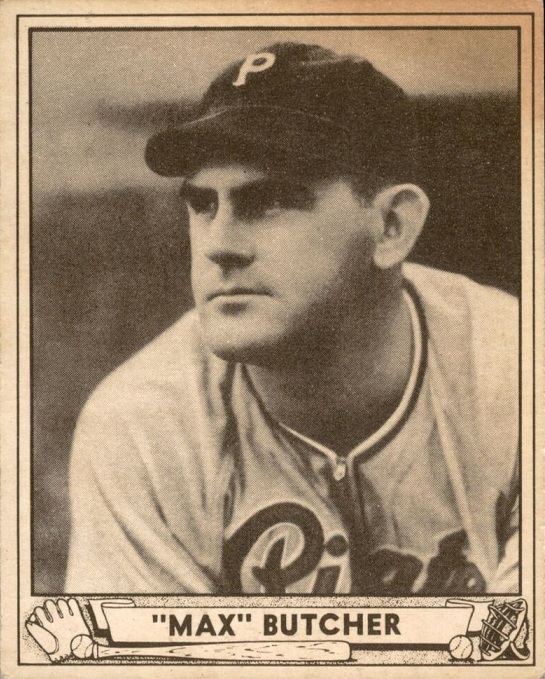 With those off-white borders, 1940 Play Ball cards looked old when they were brand new. They have some great photos of players and it offers a glimpse at some players who didn’t get many cards during their era, as production of baseball cards from any manufacturer came to a near complete halt during the war years. Besides the great black & white photos, I like the simple baseball equipment design on front, with the name in a banner. That equipment wasn’t meant to look old in 1940, but it adds that great old-time baseball feel to these cards.

The uniform Butcher is wearing there was the last year for that cursive writing style across the front. In 1940 they switched to the Pirates head logo for two years, then to the more simplistic block letter writing across the front that said Pirates at home and Pittsburgh on the road. Since Butcher joined the Pirates in 1939, even without knowing the year of this set, you could date the photo to that season. For those who don’t know, the Pirates name was written in red, and the hats were blue with a red letter, though that certainly doesn’t appear to be a red “P” on the hat in this photo, so I’m not sure what’s going on there. They had blue hats with yellow letters in 1940, so maybe they tried those out later in the year in 1939. Some of the Pirates in the 1940 Play Ball set actually have photos that were taken with the new uniforms and the hats look the same. 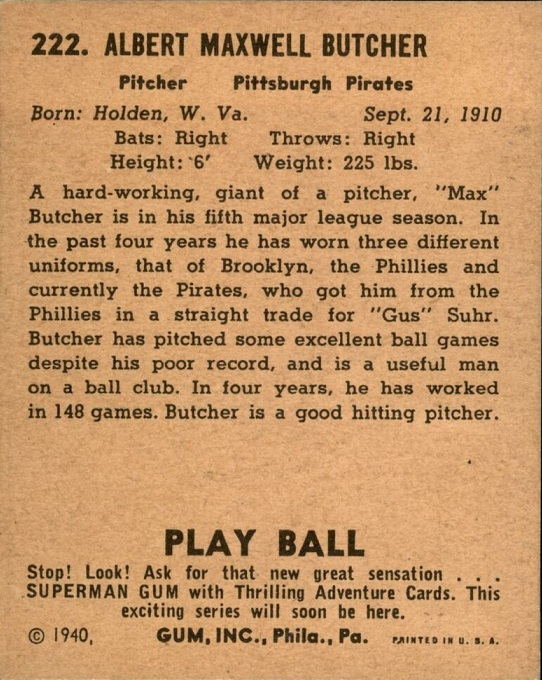 The back has a little bio section that notes the bad luck he has seen on the mound with his win-loss record. Pitching for the Phillies especially hurt him, when he ended up going 4-8 with a 2.93 ERA, pitching for a team that finished 45-105. The Dodgers topped out at 67 wins during his three years with the team. So even though he pitched much better with the Pirates, he was also pitching for a better team. The back here had an advertisement for the upcoming release of new SUPERMAN GUM, with thrilling adventure cards. That 1940 Superman set is very popular now and commons from that set sell for more than commons from this 1940 Play Ball set.

If you’re interested in this card, then you might be happy to know that they aren’t THAT rare. There are 11 examples on Ebay right now and nine of them are under $100. The lowest one is $20 and it’s well loved. There’s another under $40 in better condition, and one that is $43, which has a best offer option. The top end is $250 for a PSA 7. Five auctions have closed and three went for less than $20. The highest priced one took a best offer, so I don’t know the exact price, but it was under $85.