Today’s Pittsburgh Pirates Card of the Day comes from a small, but very popular set from 1909. The E95 set contains just 25 cards, but there are some all-time greats in the set. It includes Hall of Famers Honus Wagner and Vic Willis, who were both on Pittsburgh at the time. There’s also a few other Cooperstown residents, including Ty Cobb, Christy Mathewson, Chief Bender, Sam Crawford, Eddie Plank, Johnny Evers, Frank Chance and Eddie Collins. It includes four Pirates, with Wagner and Willis being joined by Tommy Leach and today’s Card of the Day subject, Nick Maddox. 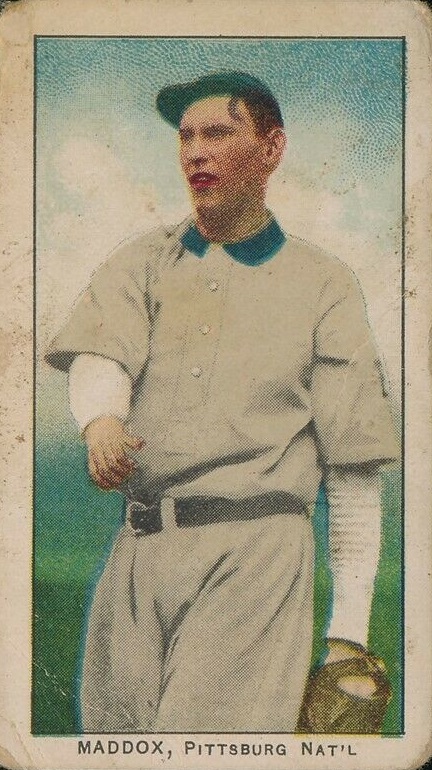 This card doesn’t have the best artwork, especially not compared to the other cards in this set. A lot of the cards are portrait style and those tend to be very popular. The Honus Wagner card is a batting pose. There are a few pitchers who have similar poses. If you notice on him left sleeve, you can see a very small part of the iconic “PBC” interlocking logo that they only used during the 1908-09 seasons.

Maddox had an outstanding run to start his career, but his big league career was done by 1910. I chose him today because he threw a no-hitter on this date in 1907 in his third career start. By the end of the 1909 season, he had a career record of 41-17. He finished with 43 career wins. So the timing of this set being released was perfect for his inclusion. He was likely a very popular card to find at the time these were first being distributed, but by 1911, the only people clamoring for his cards would be the fine folks in Kansas City, who saw him win 22 games that year for their minor league team. Maddox was done with baseball by 1914. 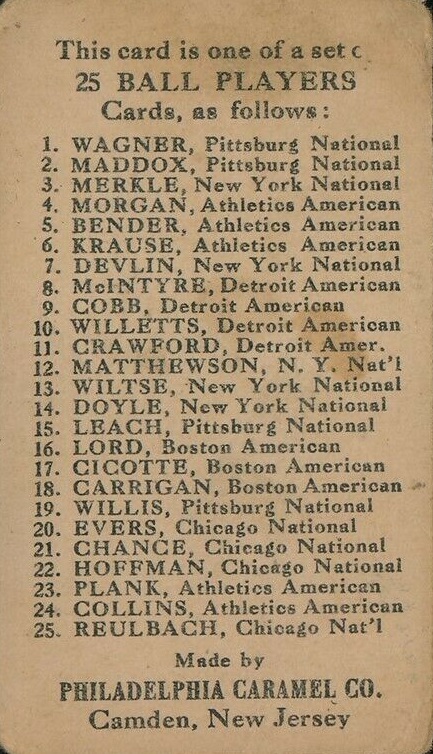 The back has a checklist for the entire set, complete with the player’s names and team name. What you see here that you don’t see often with older cards is a numbered checklist. This Nick Maddox card is card #2 in the set. In a large majority of the sets you see from this era, if there’s a number listed with the card, it was assigned at a much later date when the sets were all cataloged and given random set names like “E95”, which just tells you that it’s an early candy card (E being for early, while 95 was randomly assigned). You’ll notice on the back that teams were mentioned only by city and league, except for the Philadelphia Athletics for some reason. They are called the Athletics American. Pittsburgh was still spelled without the H at the end during this time. At the bottom is a small ad for the Philadelphia Caramel Company. Usually these old backs from this era were one big advertisement, so that’s another major difference from most cards produced during this era.

If you’re interested in this card, there are multiple options on Ebay right now, but only two of them are going for under $100. Under closed auctions, an SGC 40 (PSA 3 equivalent) ended for $79. That’s the only sold one in the last three months. For active auctions, the lowest two prices are $89 for an SGC 20 and an ungraded one is $79. That one is in decent shape, so it might be the best price for an active auction. After that, the cards range from $110, all the way up to someone asking $1,560 for a PSA 5. If you wanted one that nice, I’d suggest the SGC 50 (PSA 4) for $200.