Believe it or not, this is the first card from 2010 that I have used in this Card of the Day series. I have no idea how that has happened. It’s not like we don’t write about the players from that team in the daily history articles. I do bios for every former Pittsburgh Pirates player and there’s no one left from 2010, so they all have bios. Since I usually match up the Card of the Day to the history article, then it seems unlikely that I missed a whole year after 18 months…yet here we are.

Robinzon Diaz doesn’t bring up great memories for Pirates fans because he was the player they received back in the Jose Bautista deal. That’s not his fault though, so we can cover him here in this article without animosity. I have actually wondered why the Pirates didn’t try to get more out of him. He wasn’t a bad hitter during his time with the Pirates and they weren’t exactly any good at the time, so it feels like they could have got more from him at an attempt to soften the blow of a bad trade. It would have never been close to even, but the guy had 0.7 WAR in his 43 games with the Pirates and then they just let him go at the end of the 2009 season. For his Card of the Day debut, here’s a look at his 2010 Topps card, with a little twist. I added the Gold version, which is much tougher to find than his regular base card in the set. 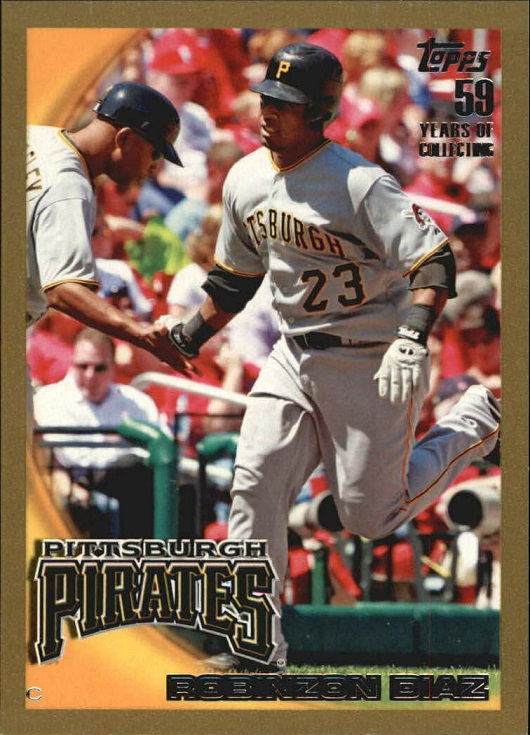 I like the 2010 Topps design. It’s not great by any means, but it’s not bad. That “like” for the set design ends when you get to the name. Topps had this delusional idea one day that people liked when the names were hard to read, so they can up with ways to accommodate those fictional people. This isn’t their worst case of making it hard to read the names, but it is pretty bad. Remember that the scan here is bigger than the actual card (unless you’re reading on your phone I guess), so it’s easier to read here. One other odd thing here is that little “c” in the corner. I didn’t know what that was until I looked at another card and saw “3B”. I’ll just say that I don’t even remember seeing another set try to hide the player’s position like that. Usually it’s next to the name, in the same writing, or written out in full (as in “catcher”). Topps really adds a lot of bonus points here with the “PITTSBURGH PIRATES” logo displayed prominently on the front. Now that is a great looking logo, and with the gold border version here, it looks even better. 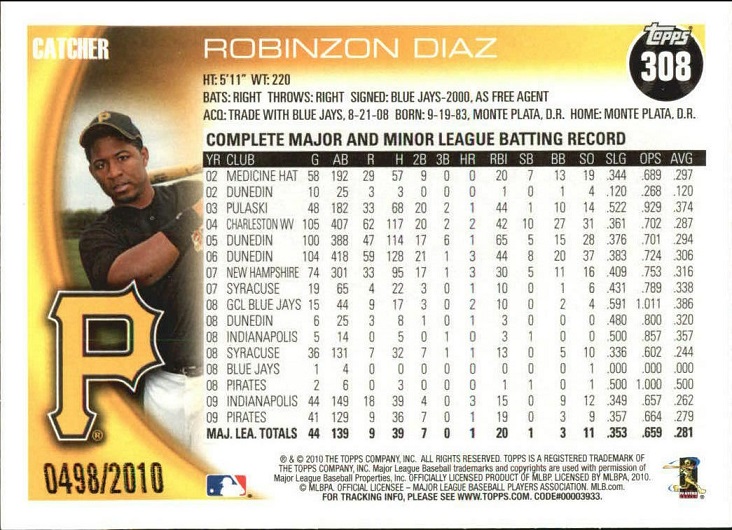 As you can see on the bottom left corner of the back, this card is numbered to 2010, and this is #498 in that series. This card has his complete minor and major league stats, or at least that’s what they claim. He played in the Dominican Summer League in 2001, so those stats are missing. As I noted up top, they got rid of Diaz after the 2009 season, so it’s lucky that he even made it on this card. Topps clearly had these ready to go before December 1st, so he remained as a member of the Pirates in the set. The strange thing is that he was a free agent for exactly nine days before being signed by the Detroit Tigers on December 9th, so he already had a new team before anyone was getting this card in packs.

I really like the back design here. They didn’t go all fancy with the stats section, which makes everything easy to read. They added a second photo for Diaz, and they added the Pirates logo fairly big on the back. That’s not my favorite logo for the Pirates (not even close), and it pales in comparison to the one on front, but I still like it.

If you’re interested in the gold version of this card, there are actually eight copies for sale on Ebay right now. The cheapest one is under $2, then after that the others are all around $4-$5 due mostly to the shipping charge. That’s really not much different than the base card if you would rather have that instead (or if you want both). There’s also a black border version that is very difficult to find (one on Ebay right now) and a red border version, which has two copies on Ebay right now. Both are around $5 shipped. The final copy of note is an autographed base card, which has a $5 price tag, along with a make-an-offer option.