Today’s Card of the Day comes from the 1975 Topps set and it features pitcher Ken Brett, who played for the 1974-75 Pittsburgh Pirates before he was traded away in the disastrous deal to acquire Doc Medich.

The Pirates would have lost the Medich deal if it was an even up swap for Brett, who was just 1/3rd of the deal to acquire a pitcher who was talking about retiring to go into medicine. Not only did Brett pitch better than Medich in 1976, which was Medich’s only season in Pittsburgh, Brett was also a significantly better hitter. Brett hit better than most middle infielders in the 1970’s, while Medich was bad compared to other pitchers at swinging the bat. To add the insult cherry on top, Brett was also a much better fielder. We wouldn’t talk so much about how bad that deal was if it was just Brett for Medich, or even Brett and Dock Ellis (who also out-pitched Medich), but the Pirates went ahead and included Willie Randolph and his future 66.2 WAR in the deal and now it ranks up there alongside the Kiki Cuyler trade as the two worst trades in team history.

Back to Brett, who was born on this date in 1948. He has the Mike Maddux disease, which is where people forget that he was a good player for a long time and usually introduce him as the brother of a Hall of Famer. The Pirates saw the good side of Ken Brett in 1974 after they acquired him in a trade for Dave Cash. That year he went 13-9, 3.30 in 27 starts and 191 innings pitched. He also batted .310 with two homers and 15 RBIs. He was an All-Star for the only time in his career during that season. The Pirates acquired him early enough in the 1973-74 off-season that Topps was able to airbrush him onto a 1974 Topps card as a member of the Pirates. So the 1975 Topps card wasn’t his first with the team, but it is his best card on the Pirates in my opinion. I like the 1976 Topps design better than 1975, but Topps used almost the exact same photo of Brett for both cards, so for me that deducts some points from the later card. 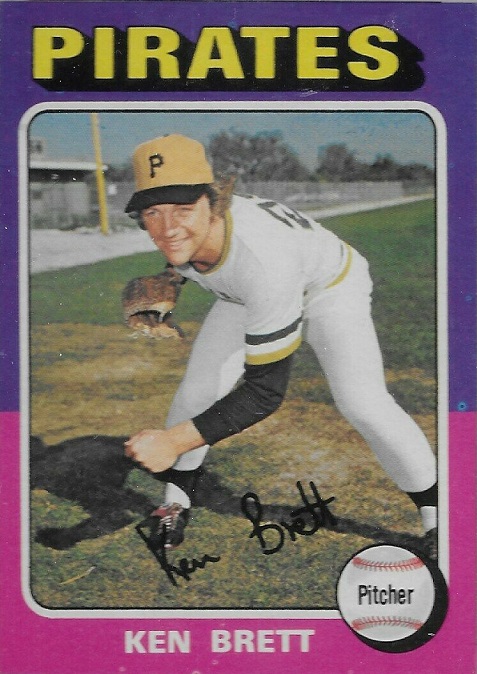 If there was a battle to see which card set was more 1970s, the 1975 and 1972 sets would fight to the death. Topps went swinging for the fences during the design of the 1975 set and I really can’t commit to whether they hit a homer or struck out. Sometimes I see this set and can’t believe how bad it is and “What were they thinking?” is all that pops into my mind. Other times I look at it and say it’s not that bad, and there are some cards I actually think look good. Maybe hitting a homer is too strong, but some card warrant a ground-rule double rating. 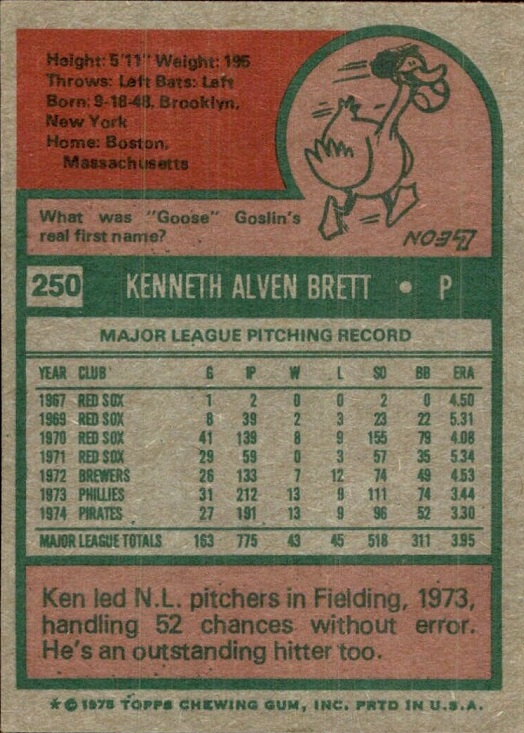 The back of this card only includes big league stats, and only seven categories of stats too. Topps eventually expanded to include 13 stats for pitchers, adding starts, complete games, shutouts, saves, runs and earned runs. The note at the bottom of this card is interesting. They mention that he led the National League in fielding in 1973 by not making an error. Topps didn’t make an error with that fact, but it’s a bit odd that they didn’t mention that he also led NL pitchers in fielding in 1974 as well, with no errors in 40 chances. Wouldn’t it have more impressive to include both years? Or at least go with the most recent year instead? I like the back of 1975 Topps cards, probably because it has a Christmas feel to it and I’m a big fan of the holiday.

If you’re interested in adding this card to your collection, then you’ll be happy to know that it can be done for as little as $2 delivered, and there are plenty of options. There are over 100 active auctions for this card right now. There are nine autograph copies of this card available. Brett is a slightly difficult signature because he passed away in 2003, though for this particular card, that still gave him plenty of time to sign some copies and he was obviously a willing signer. One of those can be bought as low as $12, but just make sure that the autograph looks good first by comparing it to authenticated ones (or just pay more for the authenticity). If you want a really nice copy, there’s a PSA 8 for $28.59 delivered. A PSA 9 recently ended for $132, so that’s a big difference in price for two cards that probably look exactly alike until you strain your eyes to find the difference. Maybe one corner isn’t as sharp on the lower grade card. Whatever you choose, Happy Collecting!