Pitcher Jim Umbricht, who was born on this date in 1930, pitched for the 1960 World Series winning Pittsburgh Pirates. He also has his uniform number retired by the Houston Astros, which is one of the most unfortunate jersey retirements in baseball. Other players have had their number retired after passing away, including Roberto Clemente and Thurman Munson. There’s also the case of Lou Gehrig having his number retired because he was sick, but those were great players who were going to get their number retired anyway. Umbricht passed away at the height of his career, but he would have never had his number retired if his career was just allowed to play out. That’s not a knock at all over his number being retired. I actually think it was a great tribute to honor a tragic case. It’s just a shame that he went out on top, but was at that peak for such a short time after spending so much time to get to that point.

Umbricht debuted in the majors in 1959, which landed him a Sport Magazine 1960 Rookie Star card in the 1960 Topps set. He was a mild contributor to the 1960 World Series team, pitching for the club through late June, then returning in September. He pitched 17 games that year and he threw 40.2 innings. He pitched briefly for the 1961 Pirates, then joined the expansion Houston Colt .45s in 1962. Over the 1962-63 seasons, he had a 2.33 ERA in 149 innings over 69 appearances. From that description, it sounds like a young player finally getting a chance with an expansion team and running with it. However, Umbricht debuted in the majors nine days after his 29th birthday. He was already 33 years old by the time his first full season in the majors ended. Unfortunately, that’s where the good news ends. He battled cancer during the off-season before the 1963 season started and underwent surgery, which helped him get back to majors for that final season. However, the cancer returned and it wasn’t treatable the second time. He passed away on April 8, 1964. The Astros retired his jersey number (#32) in 1965. 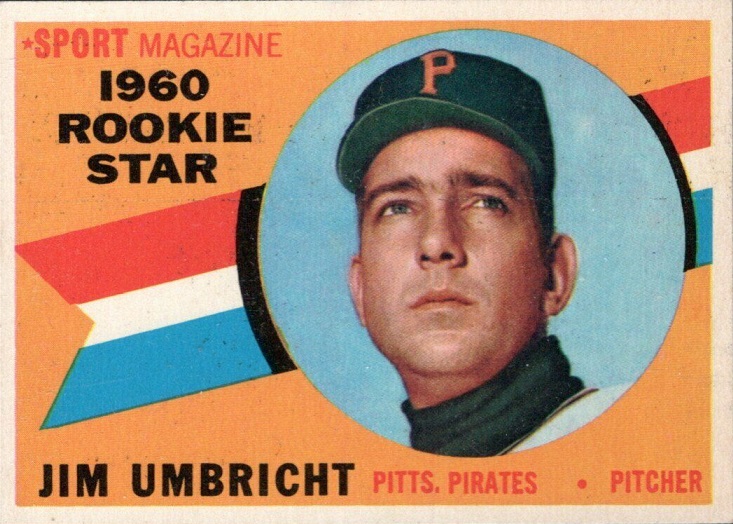 I really like these 1960 Topps Rookie Star cards. The most collectible one from that group of 32 cards is the Carl Yastrzemski rookie, followed by Jim Kaat and Frank Howard. The Pirates are also represented in that subset by infielder Manuel Javier, who probably isn’t a familiar name. That’s because he went by Julian Javier and he never played for the Pirates, getting traded before his big league debut. This design was just recently used again by Topps as a 60th anniversary tribute in one of their 2020 sets.

Here’s the back of his card: 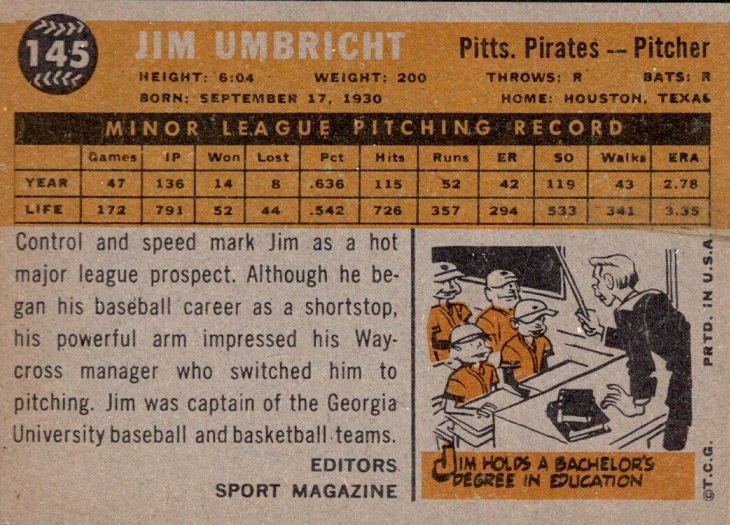 It’s funny to see the term “hot prospect” being used for someone who was 29 years old when this set came out. To be honest though, Topps wasn’t far off with that prediction. Considering the numbers he put up in Houston while dealing with cancer, I’d say that there was a good chance of him being a solid reliever for many more years. I like the cartoon, which shows baseball players wearing their uniforms in a college class, although that teacher looks a bit menacing in that photo. Also, those don’t look like college aged kids to me. Which one is supposed to be the 6’4″ Umbricht in that photo?

If you’re interested in this card, it can be found readily available on Ebay. The lower-mid grade (ungraded) copies go for just $3-$5 delivered, and even the really nice (not PSA 10 nice) ones won’t break the bank. In fact, the most expensive active listing is $76 and that’s overpriced according to closed auctions. There are plenty of nice ones available for about $6 delivered, so that’s a good buying point.