Today marks the 59th anniversary of Willie Stargell’s Major League debut. He pinch-hit in the tenth inning and struck out with the winning run on second base. The Pittsburgh Pirates ended up winning that game on the next batter, as Smoky Burgess hit a walk-off homer. That wasn’t the debut he hoped for obviously, but there were plenty of great days ahead for the man they called Pops. What better way to celebrate his debut than by featuring the card that started it all for him. Here’s a look at card #553 from the 1963 Topps set, which has four “Rookie Stars”, led by Hall of Famer Willie Stargell. 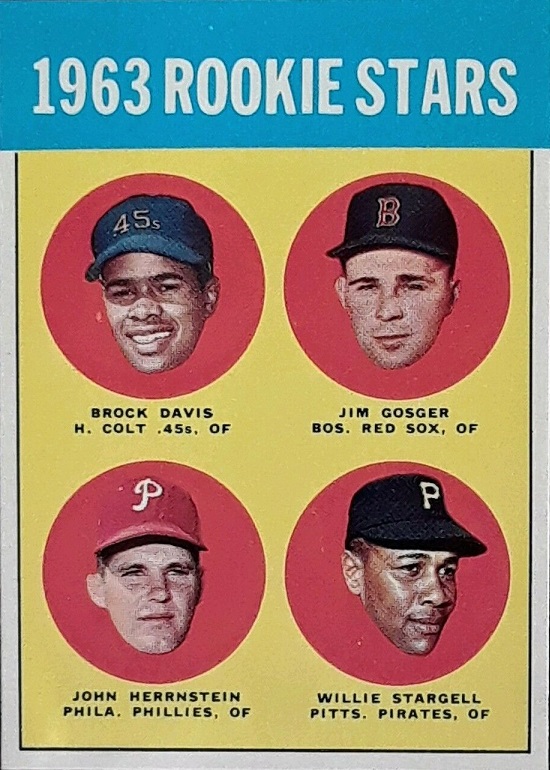 I’m going to get into details on the back for each player. I’ll just mention that this is one of my favorite cards depicting one of my least favorite design ideas from Topps. Those floating head pictures are just odd/bordering on creepy. You have a circle set aside for each player, why not fill the circle and include the neck/shoulders? Anyway, this is Stargell’s rookie card, so you learn to live with the design due to the significance. The 1963 Topps set was a colorful one, not in the 1972 or 1975 category, but it had bold colors on the front, and that design carried over into the Rookie Stars card. One interesting thing here you might notice is that you get the rare Colt .45s name for the Astros, which they had for their first three seasons, so it obviously didn’t make it onto a lot of cards. 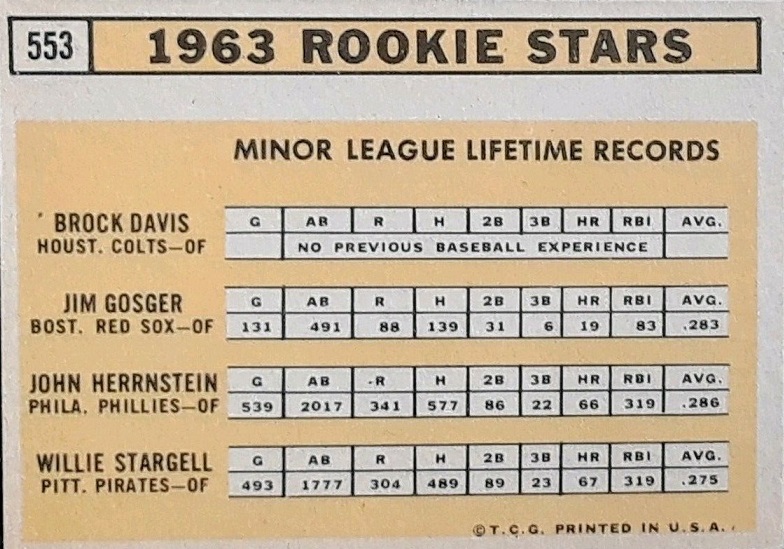 The back doesn’t give you much information on the players, especially not for Brock Davis. All we know about him from this card is that he played outfield and he was on Houston. One amazing this to see here is the stat comparisons between John Herrnstein and Stargell. Start with the doubles category and work your way over. They are basically the same exact player, except Hernnstein hits for a slightly higher average. Now it did take him 46 more games to reach those marks, but that’s not even 10% more than Stargell, so it’s amazing how much different their career paths went from this point on. One thing that would have helped here is some bio info on the players. Herrnstein was two years older than Stargell, which is significant when you’re talking about young players at equal points. Hernnstein finished with 239 games in the majors, which is quite a difference from Stargell, but it’s also better than 99% of the players who sign pro deals, so there’s that feather in his cap.

As for the other two players, let’s start with the unknown. Brock Davis  was 19 years old when he signed as an amateur free agent in 1963. He went right to the majors as a bench player for Houston, where he batted .200 in 34 games. He played one game in the majors in 1964, another ten in 1966, six more in 1970, and then got a chance to play semi-regularly for the 1971-72 Chicago Cubs. He hit .318 in 1972, which would be his final season in the majors. You might wonder how a 28-year-old could end on such a high note. I’m not 100% sure of that answer, but that high average was an empty one. If he had the same amount of plate appearances as at-bats that year and only hit singles, he would have finished with a .636 OPS. That’s the low point obviously in that scenario, so when you throw walks/HBP and extra-base hits in there, you should see a much higher number. He finished with a .696 OPS that season, hence the “empty average” label. He played another three seasons of minor league ball before retiring.

Jim Gosger had the most significant career besides Stargell from the players on this card. He debuted in the majors in 1963 at 20 years old, 2 1/2 years younger than Stargell. He saw significant time during the 1965-68 seasons, averaging 108 games per year during that stretch. He was just a .226 career hitter, with 30 homers and 177 RBIs, but he lasted 705 games in the majors.

None of these other players became stars, but you can see why they were all included. Two were in the majors by 20 years old, then other was basically the same as Stargell in the minors. Stargell carries this card, while the others could claim how valuable their rookie card is without going into detail. Both Gosger and Davis are still with us, while Herrnstein passed away in 2017.

If you’re interested in this card, expect to pay more than most cards you see featured here, unless you find a low grade (ungraded) copy. The highest priced one on Ebay right now is for very serious collectors only. It’s a PSA 9 copy and the seller is asking $22,000. I don’t expect them to get it, but it’s still the nicest one on Ebay. Out of the 42 Stargell rookies listed, 12 of them are going for $800+. There are only three examples under $100 and all of them are straight auctions, so they will be over by the time you read this article and they could still go over the $100 mark. The lowest buy-it-now option is $144 and it’s not in great shape, which makes me glad I got my copy long ago.