Today’s Card of the Day features Pittsburgh Pirates pitcher Fritz Ostermueller. The card was produced shortly after he retired at 41 years old, ending his 15-year big league career. He finished that big league career with the Pirates, joining the team during the 1944 season, and staying around until the end of the 1948 season. There aren’t many choices for Ostermueller on a card that shows him on the Pirates, so he won’t be a regular here. In fact, today’s Card of the Day choice happened because I couldn’t find good front/back scans of any other card. So here’s a look at his 1949 Bowman card. 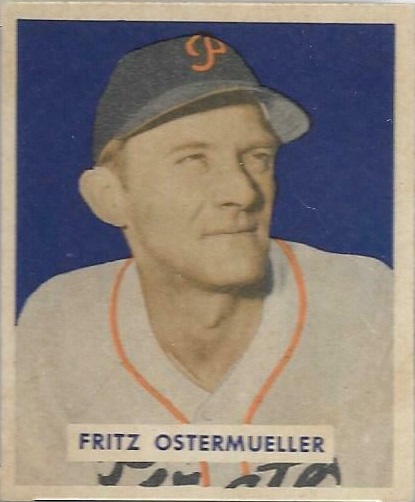 The front of the 1949 Bowman cards had a rather plain design. A small white border around the photo, solid color background in various colors, and some players didn’t even have the name on front. The cards used colorized photos, and most of the poses in the set are similar to the one you see above. A few hitters are shown in a batting stance, with one being Ralph Kiner. A handful of pitchers are shown throwing, and I know of at least one fielding pose, but a majority of the 240 cards are just portrait style poses, usually with the player looking off in the distance.

Ostermueller has the name on front and a dark blue background, one of many shades of blue for the solid background color. Those background colors range from yellow to orange to red to green to blue in the set, but the shades of each color add about ten more colors to that rainbow. These cards are 2-1/16″ by 2-1/2” in size. 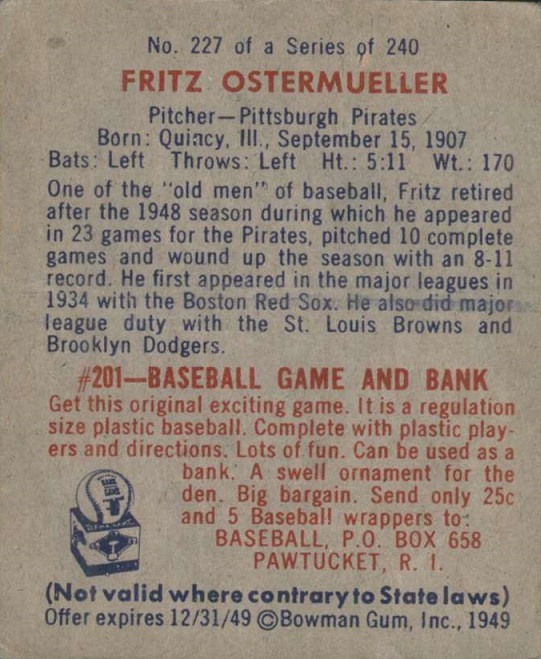 The backs of 1949 Bowman cards have a small bio section and a large advertisement from Bowman showing a baseball related item you can receive for a small fee. In this case it’s a baseball game that also serves as a bank. It’s not just a dual-purpose item that is lots of fun, it’s also a swell ornament for the den. Don’t try displaying it in the living room or your own room though, because that’s not swell. The cost was just 25 cents and five baseball wrappers from Bowman cards. The cards came in packs of five for five cents, so a baseball game/bank would cost you 50 cents, plus the cost of a stamp. Hurry up though, that offer expires 72 years ago.

The bio notes that Ostermueller retired after the 1948 season, finishing up with an 8-11 record. That has a bit of a historic note to it. He had an 8-7 record with just three weeks left in the 1948 season. He made four more starts and lost all four. That final loss dropped him to a 114-115 career record. In his last week in the majors, 15 years into his career, he went from an above .500 career pitcher to a below .500 pitcher.

If you’re interested in acquiring one of these 72-year-old beauties, Ebay has eight of them available at the time of this writing. They range from $26 to $153. The front scan above came from a PSA 8 and it’s the high-end price. However, just below that price is an SGC92 (equal to a PSA 8.5) and that’s going for $150. The back scan came from an ungraded copy in decent shape, which is going for $40. There are three sold examples over the last three months and they all went for under the lowest priced one currently up. Two of those were straight auction style listings, while the other had a $22.50 buy-it-now price and someone jumped on it.