If you have followed our This Date in Pittsburgh Pirates History articles, you have probably realized that only former players get bios. I have been expanding the bios for every other player for nearly a full year now so everybody has their 2+ paragraphs of fame, from the one-game players to the Hall of Famers. Last year at this time, we noted that Gregory Polanco was turning 29 years old in our September 14th article, with no other information. However, as of two weeks ago, he is no longer with the Pirates, so he got his own bio in the history article today, and now he’s getting his first Card of the Day article to help celebrate his 30th birthday. I went with the 2016 Topps Heritage set, which uses a throwback design, as you will see with the front scan. As you will see with the back scan, this isn’t just a normal base card from the set. 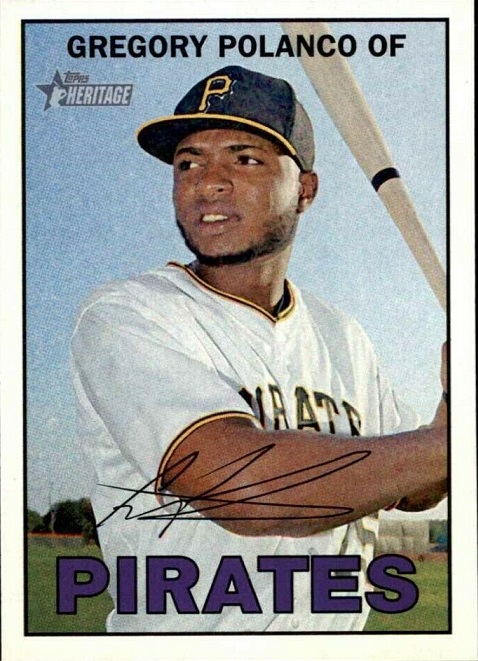 If you collect older cards then you might recognize this front design as the same one that Topps used for their 1967 set. The only difference here is that Topps Heritage logo, otherwise they used the same set-up, with the name/position in black letters across the top (some players had white name/yellow position writing), and the Pirates written out in big purple upper case letters on the bottom. The 1967 set had facsimile autographs on the front. Someone scribbled on the front of this card, so I guess that was used in place of an autograph. Not sure why they would do that, but whatever. Probably because autographs from the 1960’s looked like the player’s name, while recently autographs occasionally vaguely resemble the players initials. 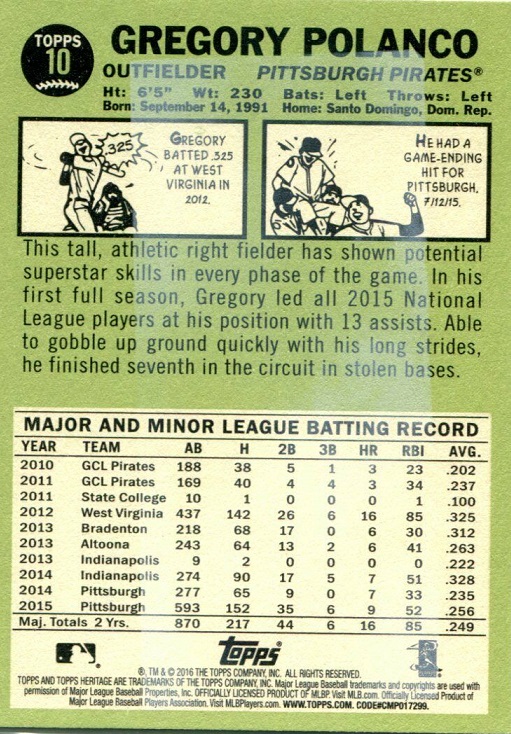 Hey all of you slightly older collectors, remember when you used to open packs of cards and one of them would have a gum stain on the back? Well what you are looking at above is Topps Heritage bringing back that annoying occurrence on purpose. That’s right, that stain is supposed to be there. The back actually smells like the old Topps gum on those cards, so I guess that’s a perk. It’s an interesting limited edition idea, but it wasn’t exactly bringing back something good. Imagine Topps bending corners ahead of time on 100 cards of each player and making it a chase card. That’s basically the same thing.

The backs of these cards have the same look/colors/setup as the 1967 Topps card. Look how happy generic Topps man is, as he plays the role of Polanco batting .325 in Low-A ball. Topps put minor league stats on these cards, but they left off his 2009 season in the Dominican Summer League. The stat categories are also the same ones used by Topps in 1967.

This card without the gum stain is somewhat easy to find on Ebay (meaning quantity, there’s no maze of Pirates trivia to go through before you can see the auctions). There are currently 31 auctions up for “Gregory Polanco 2016 Topps Heritage”, but only two are for the gum stain version and they are going for $5.50 (with a best offer option) and $7.99. There are other versions of this card available too, including a mini and a jumbo, an autographed one, and a chrome refractor. If you just want a normal 2016 Topps Heritage Gregory Polanco with no frills, multiple sellers are standing by, waiting to send you one for under $2 delivered.