Today’s Card of the Day is the second one here for Pittsburgh Pirates catcher Smoky Burgess, who was a member of the 1960 World Series champs. The first was from the 1963 Fleer set and I posted it on January 30th, the date that the Pirates traded to get Burgess from the Cincinnati Reds. Today’s article is to mark the anniversary of the day that the Pirates lost him to the Chicago White Sox via waivers in 1964. So what better card to mark that transaction than his 1964 Topps card, which I think is one of his better offerings from Topps. 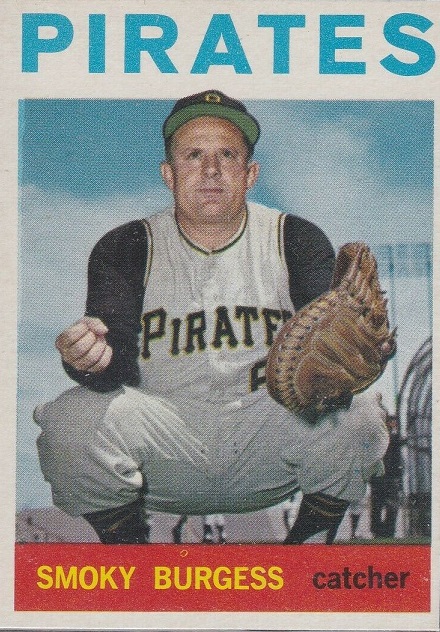 If you know anything about pre-1971 Topps cards, you know that the real photo cards (non artwork) all have staged poses or portrait-style pictures. The 1971 set started including some game action shots for the first time spread throughout the set, then in 1972 they had a group of cards called “In Action”, before going with more action shots in the 1973 set and beyond. This Burgess photo is one of the better pre-1971 staged action photos in my opinion (it’s no Manny Sanguillen rookie). That might just be because they used the same ideas a lot, such as a follow through swing or pitcher who just released a pitch, and this is somewhat different from the rest. There aren’t a ton of catcher poses, and not all of them look as good as this one. Let’s face it, a lot of the other ones don’t have that great Pirates uniform from that era, so they were automatically at a disadvantage. It also helps that I like the look of the Pirates cards in the 1964 set (each team had a different color scheme). I usually prefer when they use team colors as part of the card design, but the blue and red/yellow combos here work. 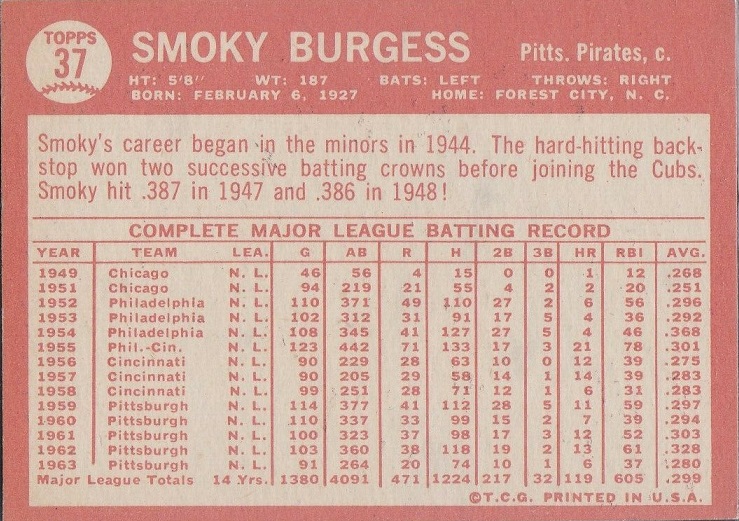 The back of the card is quite different from the front here, as in you probably weren’t expecting so much pink on the back of a baseball card. Maybe in the borders, but not everything on the card. Burgess had a long career at this point, so Topps didn’t include any of his minor league stats, but they did use the section above the stats to talk about his hitting exploits in the minors, including .386 and .387 averages in his final two seasons in the minors. He was a .299 career hitter at this point, and he finished up at .295 four years later. It’s interesting to see here that Topps went with his childhood nickname of Smoky and didn’t even include his real name on the back (Forrest).

This card is basically a common, though he’s categorized as a semi-star, which usually adds a small extra value to the card. The highest priced one on Ebay in a near-mint card that is ungraded, but the seller wants $100. There’s a PSA 7 for $82.49, and then there’s a PSA 4 for $70 that is the rare Venezuelan edition of the card. They were exact replicas of the regular set on front of the cards. The back was black instead of pink and not every card in the 1964 Topps set was available in the Venezuelan set, otherwise they were the same thing. If you just want a nice looking ungraded example, there are plenty of options under $5 delivered. Two interesting closed auctions are worth mentioning. A PSA 9 sold for $181 and an autographed copy was just $16. That was a nice purchase for whoever got it.