Today’s Pittsburgh Pirates Card of the Day is the first one we have used here for Don Slaught. I basically tricked myself into thinking he has been in this series before by using scans of two different cards of him for cover photos for articles. You can see one of those scans today in our This Date in Pittsburgh Pirates History article because Slaught was born 63 years ago today. For his first Card of the Day article I decided to cover a new set for the first time. Today we look at the 1995 Score set. 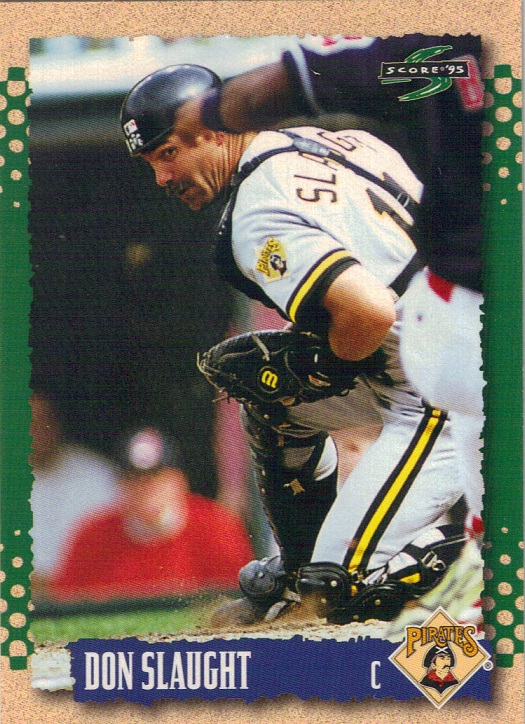 I’m going to start off by saying something nice here. I always give extra points for the Pirates logo on the front of cards. That’s a good thing for this card because I don’t like anything else about it. This has to be one of the worst front designs out there. It reminds me of those plastic rings that hold six packs of beverages, along with the brown area looking like sand, so basically this front design is bad for birds and fish as well as human card collectors. I’m not sure what they were going for with the nameplate design, but it doesn’t work. The picture here has the right idea, and it would actually be great if there wasn’t a blurry arm blocking part of his face. They had the logo though, and the back of the card is a little better… 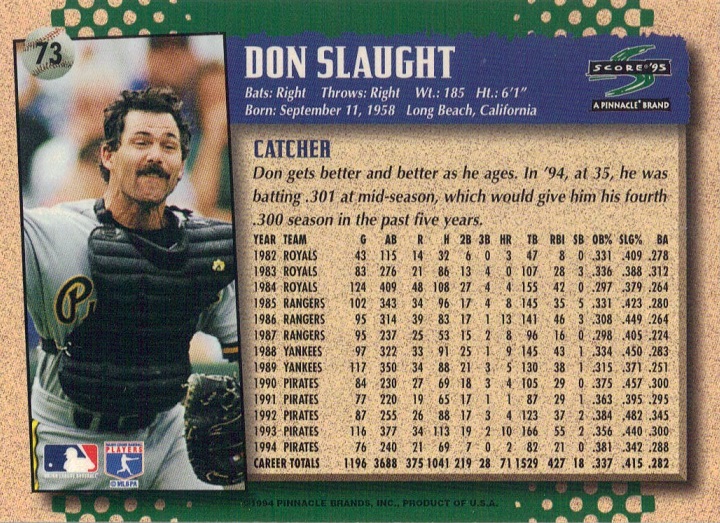 The back isn’t really better, I’m not sure why I said that. That same bad design from the front is used on the back. This photo they used is a great choice. Putting logos on his groin was not a great choice. They have all of his big league stats, so I like that part. If you’ll notice the bio section above his stats, it says that he was batting .301 at mid-season, which would give him his fourth .300 season in the last five years. Scroll down to his 1994 stats and notice that he batted .288 that season. Umm, pardon my language, but what the heck, Score! Since when does a mid-season batting average count as having a .300 average for the entire season? Also, he clearly isn’t getting better as he ages, just look at the stats that you ignored in adding that fact. His OPS went from .866 to .796 to .723 in his last three years. How drunk was the person who wrote that? And why does the bio section start with “catcher” written out in big letters? Since when was the player’s position considered to be the intro header to a bio? You know, now that I think about it, I’m guessing the design was made by the same person who wrote that bio fact.

I want to hear from someone who actually likes the design of this card. Forget the poorly placed objects in both photos and the false bio fact, and tell me if you like the design layout. I won’t judge. After I rip apart old designs, I always mention that I couldn’t do better. I’m not sure that’s the case here.

You can get this card for about $2 delivered like any other common on Ebay. There aren’t a lot of choices, but that’s only because not many sellers feel that it’s worthwhile to list a non-popular card for $2 due to time/shipping/fees involved. This set also had gold and platinum versions of this card, which had slightly different looks to the front. The beach sand is replaced by different colors. Those are much tougher to find, but they are still available on Ebay for under $5, with the price being higher due to shipping costs, not the listing price, which is 99 cents in both cases.