We have already featured a 1959 Topps card of slugging first baseman Ted Kluszewski in this series, but this isn’t a repeat. That card was titled “Danny’s All-Stars” and it featured Kluszewski, Frank Thomas and Danny Murtaugh on one card. Today’s Card of the Day is the base card from the 1959 Topps set for the man that they called Big Klu. He spent two seasons with the Pittsburgh Pirates during a time when Topps was the only real game in town, so there aren’t many options for him in this series. Basically, he won’t be a regular here, but he was born on this date in 1924, so it’s a good day to give him a solo article in this series. 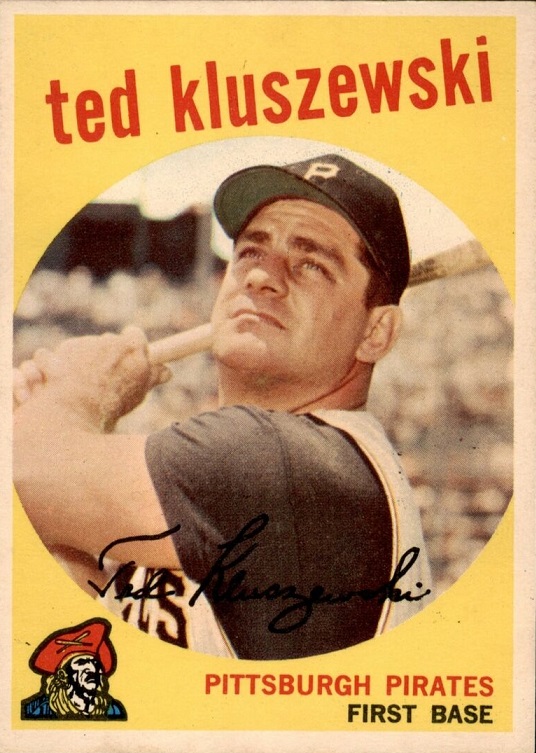 The 1959 Topps set was a bit different in that it was the first year that Topps had a frame for the player photo that wasn’t a square (or no frame), so when you see the year-by-year sets laid out next to each other, this set really stands out. In fact, this type of layout hasn’t been repeated, other than tribute cards in more recent Topps sets.

Kluszewski has a yellow border and red writing, which can be found on some of the Pirates players, including Roberto Clemente. Other cards have orange, green or pink borders and the writing can be found in white or black. The 1959 cards have facsimile autographs, which Topps used in 1952 and 1954-56, but not during the 1957-58 seasons.

As you know by reading this series since last March, the Pirates logo on the front always adds extra points. That logo from this era is a great one, and it was last used during the 1959 season, before they went to that more cartoonish 1960-67 design. If you don’t count the 1908-09 PBC design as a logo, then the 1968-86 logo is my favorite (I’m assuming you know what that looks like). This particular logo would fall right behind it. I’m not a big fan of the 1960-67 design, but even that one is much better than what they have now, which is boringly plain in comparison to everything they had prior. 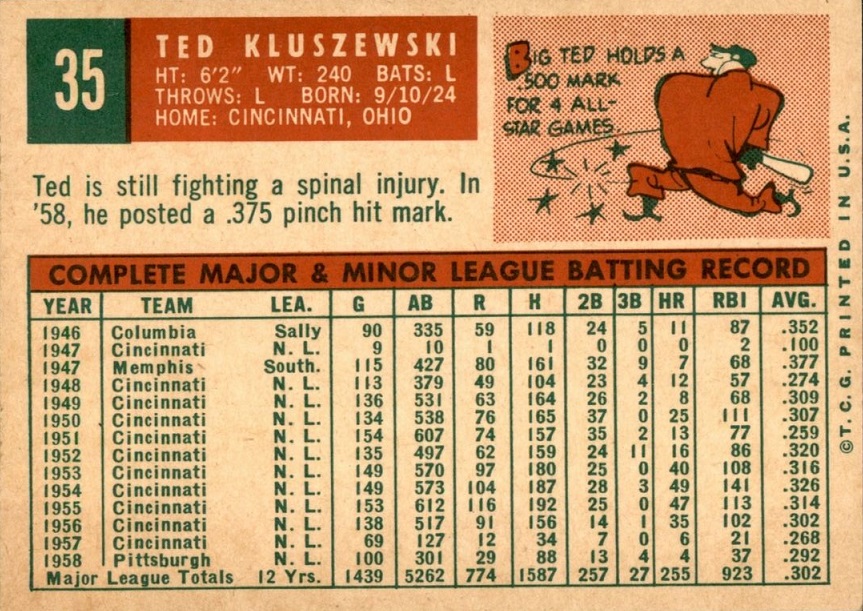 A back injury made Kluszewski’s time in Pittsburgh disappointing. They weren’t getting the slugger who put up huge numbers during the 1953-56 seasons, when he averaged 43 homers, 116 RBIs and hit .302+ each season. They weren’t even getting the solid hitter from his first five seasons. It’s too bad about his back injury, because he was trending towards being a Hall of Fame player before the 1957 season. I like the All-Star fact there in the cartoon. Kluszewski made the All-Star game each year during that 1953-56 run, but never made it again due to the back injury. He went 7-for-14 in All-Star play, with three doubles and a homer, giving him a 1.429 OPS against the best pitchers of the day. Those sleeveless jerseys he wore helped mentally defeat opposing American League pitchers before they even threw a pitch.

This card is in the semi-star category, where it trades hands often on Ebay, but the price stays low. When people list mid-grade versions in auction style listings (as opposed to buy-it-now), they can go for as little as $3 delivered. Most sellers will ask a little more though. There was a PSA 9 on Ebay in June that sold for $999, so the card can get pricey in high grade. However, that’s just for the elite cards, as a PSA 8 ended in August for $50 delivered. That’s quite a bargain, especially since the difference between an 8 and 9 is sometimes impossible to see. In the grading world, the best cards out there graded 8 are in nicer shape than the worst cards graded a 9 because the grading is done by humans.