I recently did an article titled Thirty-Two Days a Pirate: The Goodloe “Pud” Rogers Story. It detailed the baseball life of Goodloe Rogers, who spent 32 days with the Pittsburgh Pirates in 1914 and didn’t get into a big league game. That was a fun article to deep dive research, so I decided to do it again with a 1913 player named Jake Holderman. I picked today because a Pirates player born on this date had a lot to do with Holderman never getting into a game.

Jake Holderman debuted in pro ball in 1912 with Tacoma of the Northwest League. He had just 80 games of pro experience prior to the Pirates picking him up in the original version of the Rule 5 draft, which happened every September when big league teams drafted and paid for players from minor league rosters. Tacoma didn’t want to lose Holderman and their owner offered Pirates owner Barney Dreyfuss the same amount of money he spent on the draft pick if he would send Holderman back to him. I’m not sure why he would agree to do that, but it probably would have worked out for the best if that’s the path Dreyfuss took instead.

Holderman’s name was first made known to local Pittsburgh fans on September 17, 1912 when the list of drafted players was announced. His last name was all that was known until January 12, 1913 when the Pittsburgh Press had a little blurb on him, though his first name was still unknown to the fans and the papers just called him JW Holderman.

In that blurb, they said that he was a college boy out of DePauw University (in Indiana), who had one year of pro ball and he was signed under recommendation of long-time scout and former Pirates player George Van Haltren. Holderman’s height was said to be 6’0″, and that’s all we got as far as personal information. Holderman said in a letter to the team that he hoped to get a contract for 1913 and a chance to make good with the team.

Eight days after that mention, there was apparently interest from the readers of the Press, who asked for more information. They were able to track down stats for him, which differ slightly from what is known now, but they were considered to be official stats at the time, so I’m going with them instead. In 293 at-bats over 80 games, Holderman had a .249 average, with eight doubles, four triples, five homers and 17 stolen bases. He also had a .975 fielding percentage. Those are decent stats for the deadball era, but we are talking about a Class-B level of play, which is quite a jump from that level to the majors after just 80 games of pro ball.

On January 26th, the Pirates roster was announced and Holderman was one of eight infielders on the list. Teams usually didn’t carry many extras back then, and he would have quite a task to unseat any of the regulars, which included three starters from the 1909 champs, Honus Wagner, Dots Miller and Bobby Byrne. Holderman wasn’t competing for a starting spot though, just hoping for a chance to make the team.

On March 9th we got more bio information, most of which isn’t listed on his Baseball-Reference page. His height was upped to 6’2″ and he weighed in at 180 pounds. He was 22 years old at the time, and batted/threw from the right side.

On March 15th, with Spring Training already under way, it was announced that Holderman was late leaving his home because he came down with the flu. He was expected to leave for Spring Training in Hot Springs, Arkansas that day. He arrived to the Pirates on March 20th and took infield drills that same day. Despite being tired from the trip and a bit weakened due to the flu/travel, Holderman was in the lineup the next day when the Pirates played an intrasquad game. He got two hits in that game and he handled 12 plays in the field without any issue.

On March 30th, the Pirates played another intrasquad game. The teams back then were split up into the Regulars, which consisted of players who were “guaranteed” to make the team, and the Yanigans, which was mostly younger players who were either fighting for a bench job or just getting a look. I quoted guaranteed because it was possible to get demoted from the Regulars to the Yanigans during Spring Training, and playing well for the Yanigans could get you moved up to the Regulars. Holderman was playing for the Yanigans, and on this day he went 0-for-3 with nine plays in the field. Two days later in another intrasquad contest, he went 1-for-3 with a sacrifice fly and ten plays in the field. The opposing pitchers that day were two Pirates greats of the era, Wilbur Cooper and Howie Camnitz. Cooper was playing his first Spring Training with the Pirates.

The Pirates played a minor league team from Wichita on April 5th and Holderman went 1-for-4 with a run scored and an RBI. He had 15 chances in the field and committed two errors on the same play, both of which led to unearned runs. He couldn’t handle a throw in the second inning, then he picked the ball up and tried to get a runner going to third base and his throw was wild. The two teams met again the next day and he was 0-for-5, with 11 clean plays in the field. This game happened just six days prior to Opening Day, so the Pirates were closing in on decision time for players. Holderman was 7-for-29 at the plate and had three errors in 94 chances.

Manager Fred Clarke made seven cuts after that April 6th game and Holderman was safe, though it was said that he probably wouldn’t last the season with Dots Miller playing so well at first base.

The Pirates opened up in Cincinnati on April 12th, then went to Chicago for three games the next day. Four of the 25 players who made the Opening Day roster were sent back to Pittsburgh instead, including Holderman. That was a common practice back then. Teams would leave extra players behind to save on travel costs. Since the Pirates were coming home for a game on April 17th, those four players made the trip early. If the team got in a bind, they could always send for players to join the team.

While Holderman was with the Pirates, he wasn’t playing and therefore wasn’t getting any mentions in the local papers. That was until May 3rd, when for the first time, one of the papers actually mentioned his first name. Unfortunately, the reason he was mentioned was that he was one of just two players left to practice at Forbes Field while the rest of the team went on a road trip that would last until May 22nd.

Holderman ended up joining the team on the road, but on May 21st he was sent back to Tacoma under an optional agreement. During his time with the Pirates, they played 34 games in 40 days and Dots Miller played every single inning at first base during that time. Just four days after Holderman was sent to the minors, infielder Ham Hyatt played back-to-back games at first base, which would have likely been Holderman’s chance to finally play.

The Pirates had until August 15th to decide whether to bring back Holderman under the optional agreement and they decided at that time to let him go, releasing him to Tacoma. He ended up playing 92 games that season, also seeing time with Seattle in the Northwestern League at the end of the year, after being released by Tacoma.

In 1914-15, Holderman played for Fort Wayne of the Class-B Central League. He batted .300 with 29 extra-base hits in 122 games during the 1915 season. The next year was spent with Terre Haute of the Central League, before he finished out his career in 1918 with Omaha of the Western League. He missed the 1917 season and part of 1918 due to the war. He was playing semi-pro ball in 1920, but he picked up the nickname “Doc” by then because he worked in the medical profession, including his time in the military.

Holderman never made it back to the majors, so he isn’t officially recognized as a Major League player, but this story shows that he spent quite a long time with the team. He was also in the right place at the right time when team photos were taken. Holderman is labeled below, along with the first baseman who kept him from getting into a game, as well as Hall of Fame outfielder Max Carey, who was standing in the middle of Holderman and Miller. 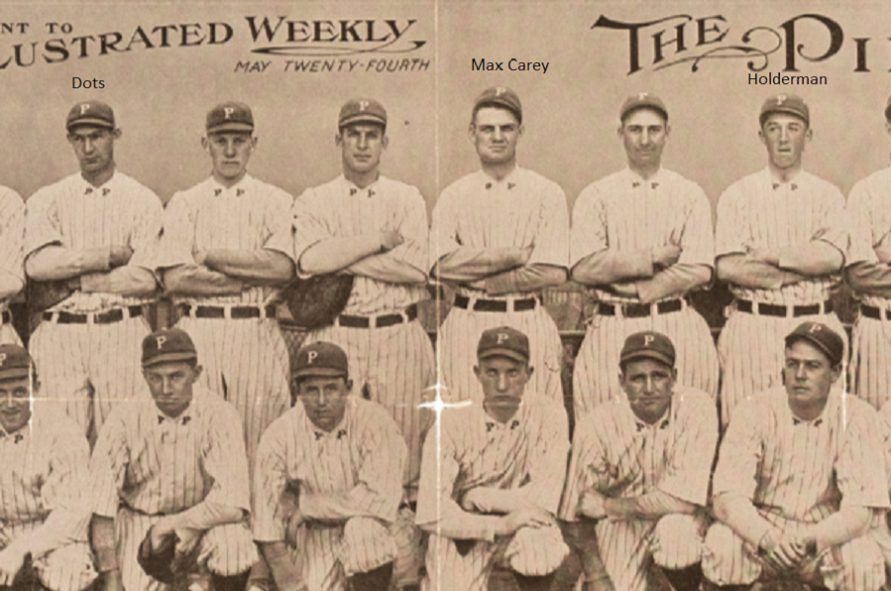