Today’s Card of the Day is a first timer for the card set, and a player you’ve seen before in this feature multiple times. Dots Miller was born 135 years ago today in Kearny, New Jersey, birthplace of yours truly as well, just at a much later date. In fact, my great-grandfather, who almost certainly knew Dots, as they were both living in the German section of Kearny just a block apart at one time, was born 135 years and 17 days ago today. Miller’s niece married his nephew, giving us seven relatives in common today. I’ve mentioned before that we have six in common, but a future Pittsburgh Pirates second baseman was born a few months ago, so it’s seven now. To celebrate my closest connection to the Pirates, here’s a look at his 1910 D322 Tip Top Bread card. 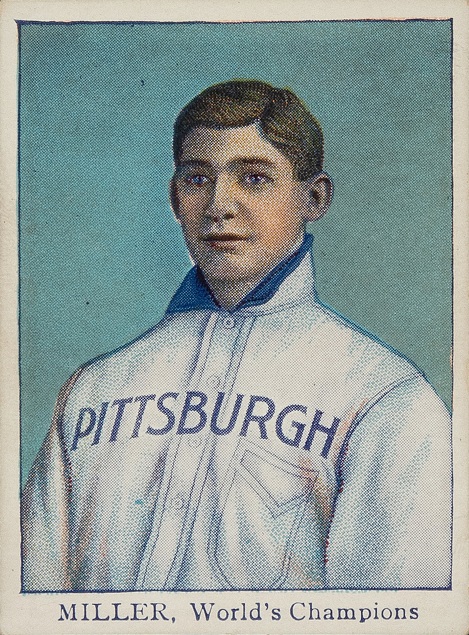 These cards were issued not too long after the Pirates won the 1909 World Series. They took 1909 photos, made their own artwork and issued a 25-card set of only players on the Pirates (sort of, see the back section for more details). All of the cards have this same layout, with the portrait style pose, cutoff right around the elbows. All of the players had that same background with no design, though various colors were used, including a few cards that had one color fade into another for a nice look.

Two things are very interesting here and they are the same thing. The word “Pittsburgh” on the jersey is spelled incorrect for the time. The H at the end wasn’t brought back until 1911, and most cards from this era don’t have it. The jersey didn’t actually have Pittsburg/h written on it. I of all people should know, because I own the jersey he was wearing when this photo was taken and there’s no writing on the front. However, they cut out the PBC patch on the side, which may have possibly been done because the team didn’t wear that in 1910, or just the crop of the original photo didn’t show it, so they didn’t know to include it. One final note and that’s the spelling of “world’s” at the bottom. In the early days, the World Series was often called the World’s Series. 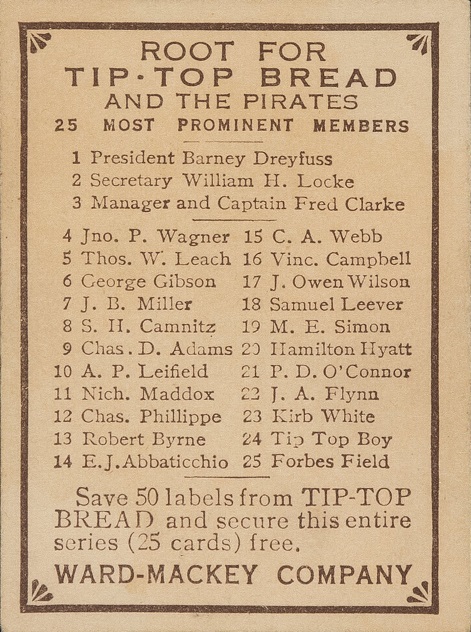 I said there would be more on the part about the players in this set, and if you look at the checklist, you will see that it’s not all players. They included a card of Barney Dreyfuss, which I need to cover here some day, because once he made the Hall of Fame, the value of that card took off. When there are many more collectors than options, then that will happen. The secretary of the team also had a card. Back in 1909, that was a job with huge responsibility. They didn’t have a huge front office, so someone like William Locke did the job of about five people right now. There’s also a card of Forbes Field, and the Tip Top Boy got thrown in there as well. The company’s mascot was apparently a “prominent member of the Pittsburgh Pirates”. The back notes that you can get the entire set for free, as long as you saved up 50 labels. I would love to know how many people did that. It can’t be a high number because these cards are hard to find now.

This particular scan I used was from a high grade copy that sold for $690 two years ago. It’s interesting to check out Ebay right now. There are 17 cards from this set listed (none of Miller) and the lowest priced one is $600. If you check completed auctions, four of the six sold ones in the last three months were for under $600, but they were all in very low grade. Basically, unless you find a very well loved copy, you’ll be paying $500+ for one of these cards. I own a Miller, which is in rough shape (otherwise I would have used my own scan), and I guess I bought it at the right time, because 5-6 years ago I paid $70 for it. I remember at the time seeing 2-3 others that were all overpriced then, but they would be deals now in appears.