Today’s Card of the Day comes from an obscure player in Pittsburgh Pirates history, who was born 67 years ago today. Jim Smith’s entire big league career consisted of 42 games for the 1982 Pirates. Just 11 of those games were starts, all at shortstop, though he played some third base and second base off of the bench. Despite the brief MLB career, he ended up with cards in all of the majors sets in 1983. I chose his Fleer card for one simple reason. When I searched “Jim Smith Pirates” on Ebay, this is the only one that came up. His cards from Topps and Donruss each identify him as Jimmy Smith, so that’s how people list his cards on Ebay as well. We have only featured the 1983 Fleer set here once (Willie Stargell), so now’s a good time to take a second look at that set with someone a little less famous. Here’s card #323, Jim “Jimmy” Smith. 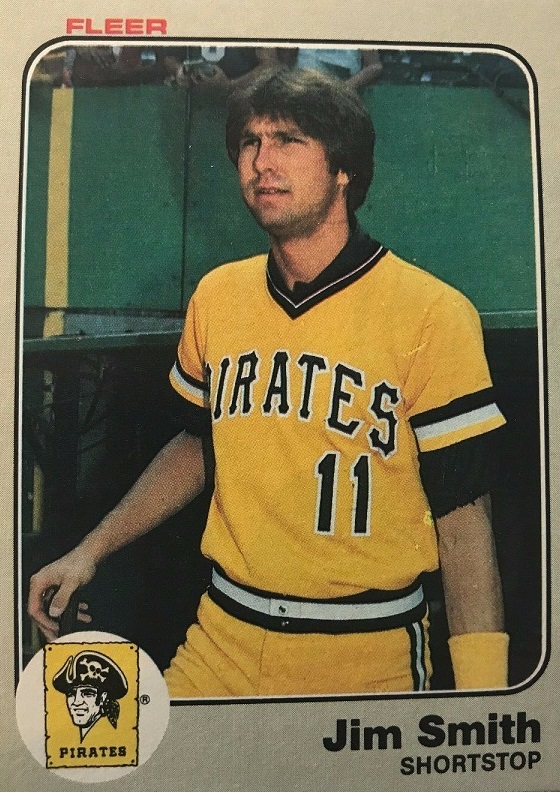 One interesting thing here is the uniform choice. He’s wearing the full gold uniform on this card. On his 1983 Donruss card, he is wearing the white top. The photo is cropped above the waist, so the pants aren’t visible. On his 1983 Topps card, he has a gold top and black pants. So his cards side-by-side-by-side offer you a nice mix from the mix-and-match uniform era. Fleer gets extra bonus points here for the great Pirates logo of the era. This year is the first time they used the logo on front, and they are also the only one of the three major companies to include the team logo in 1983. 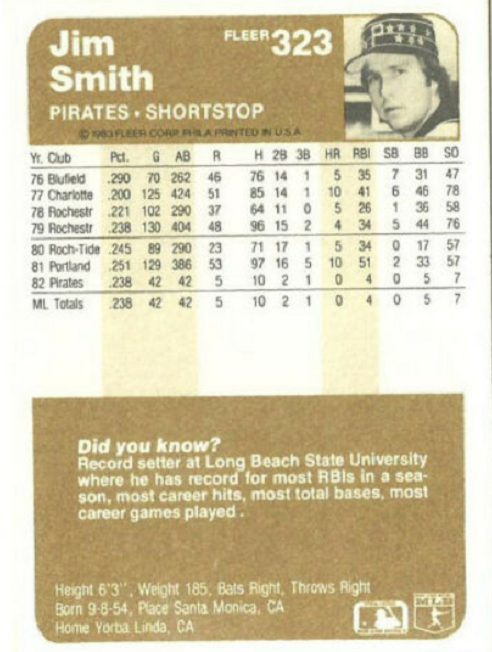 The back adds a second picture for Smith, something new for Fleer in 1983 (they were only producing sets since 1981). What’s nice about the second photo is that you get the pillbox cap, complete with some Stargell stars. Fleer did a nice job of including all stats for each player, including minors. For Smith that wasn’t much obviously, he was in his seventh season of pro ball in 1982, but for MLB veterans it was a nice touch. When the player had a shorter career, they were able to add a “Did you know?” section at the bottom. As you can see, Smith had a pretty nice college career at a major school, which led to him being a sixth round draft pick of the Baltimore Orioles. They gave up on him after a knee injury and loaned him to the New York Mets in 1980, then sold him to the Pirates in 1981.

As you can see, he had just 42 at-bats during his only season in the majors, and he was healthy the entire time. One of Smith’s jobs was backup to Johnny Ray, but Ray ended up starting all 162 games and he played all but 13 innings on defense that season. Smith took six of those 13 innings. Jim Morrison and Nelson Norman split the rest.

This is your typical common card situation on Ebay. The real value of this card is a quarter on a good day, but there’s no way anyone would mail you a card for a quarter. Not only is there shipping, but they have Ebay fees. So you have to pay about $2 to get one delivered. That’s not bad, because I assume if you want one of these cards, then two bucks won’t break the bank and you’re not worried about resale value. The only auction of note here is an autographed copy going for $14 delivered. That one has a best offer option, so you might want to make an offer first. Smith has a nice looking autograph too, none of that new-school scribblegraphs nonsense.