Card of the Day: 1935 Goudey 4-in-1 Traynor/Lucas/Thevenow/Wright

Today’s Card of the Day is our third one featured here from the 1935 Goudey 4-in-1 set. The set is comprised of 36 cards that feature four players and they are usually all from the same team. There are three cards in the set with players from the Pittsburgh Pirates, totaling 11 players from the team. The best Pirates card in the set has Hall of Famers Paul Waner, Lloyd Waner and Waite Hoyt all on one card. The second card we looked at didn’t have any Hall of Famers, but it’s four Pirates players on a card from 1935, so it’s still a great card.

Today’s Card of the Day will wrap up this set for this series. It has Hall of Fame third baseman Pie Traynor as the main drawing card. There’s also Red Lucas, a workhorse pitcher for a long time, who is one of the better hitting pitchers you’ll find in baseball history. Then there’s Tommy Thevenow, a glove-first infielder, who was features in yesterday’s This Date in Pittsburgh Pirates History article for his September 6th birthday. Finally, there’s Glenn Wright, a one-time star shortstop for the Pirates, who was on the Chicago White Sox when this set was released, making him the one player on the three cards covered here from this set who wasn’t on the Pirates at the time. 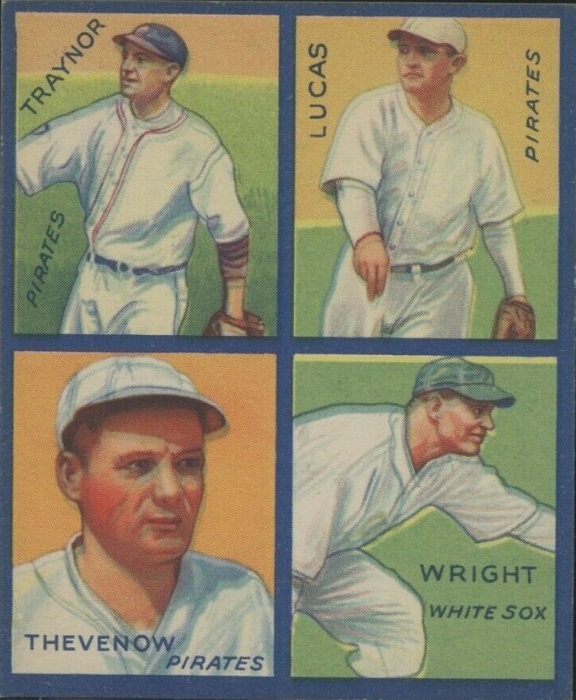 I guess you can tell now where the “4-in-1” set name comes from by looking at the card layout. If you collect the popular 1933 Goudey set, then you would would immediately recognize these photos. All four of these photos are the exact same ones used in the 1933 Goudey set for these players. The only difference being that Red Lucas was on the Cincinnati Reds in 1933 and Glenn Wright was on the Brooklyn Dodgers. Wright played just nine games total for the White Sox after they purchased his contract from his 1934 minor league team, so this is a rare representation of him in Chicago. Lucas joined the Pirates in a November 17, 1933 trade with the Reds.

By the time this set came out, Pie Traynor was nearing the end of his playing career. He played 57 games during the 1935 season, then another five more in 1937, before hanging up his glove. Thevenow, who was in his fifth season with the Pirates, took over at third base for Traynor in 1935, getting 82 starts at the hot corner. 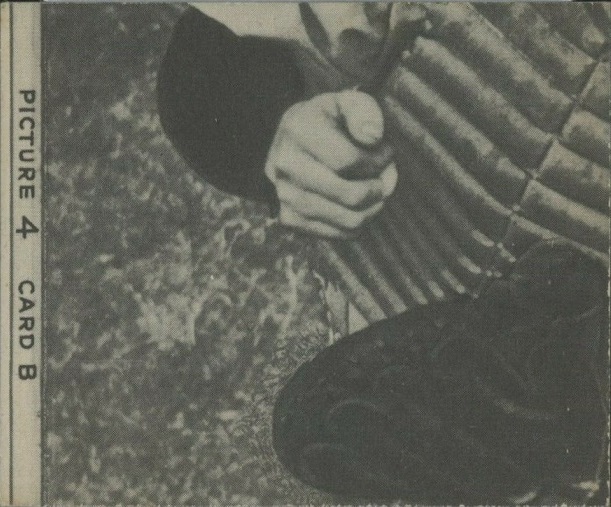 On its own, the back here isn’t much to look at. These cards came with four different puzzles on the back and this one here is a piece from the Mickey Cochrane card. The little note on the side tells you that it is “picture 4”, which means it is part of the Cochrane puzzle, and “card B” just tells you where it goes on that puzzle. I couldn’t find a picture of the completed puzzle, otherwise I’d show that here. As you might be able to tell, I rotated the scan so you can see how the piece looks as part of the puzzle, but if you looked at the front normally, then turned the card over, the “picture 4/card b” part would be at the bottom.

This card isn’t a common because of the presence of Pie Traynor. It’s not one of the best cards in the set though, as this set is loaded with Hall of Famers and a few of those cards have multiple Cooperstown permanent residents. It’s in that large middle group that still gets a good price. A PSA 7 of this card recently sold for $436. A PSA 2.5 sold for $78, and a low grade one went for $44. There are ten active auctions right now and the only one that isn’t over $100 is the one that someone cut into four separate pieces. So if you want one (in one piece), expect to pay over $100, or wait for an auction-style listing.