In the summer of 1914, the Pittsburgh Pirates had a catcher named Goodloe Rogers on their active roster for 32 days. He joined the team on June 1, 1914 and he was released unconditionally on July 2, 1914. The Pirates played 27 games during that stretch and he didn’t get into a single one. Similar things have happened before in team history, such as Hall of Famer Red Faber spent 38 days with the Pirates without playing a game. Skeeter Shelton spent 51 days with the 1909 World Series winning Pirates without a game. The difference between those players and Goodloe Rogers is that the latter never played a big league game. As an added “close but no cigar” to his career, the Pirates weren’t his only big league team.

Rogers was a catcher for the University of Michigan and he made a name for himself, hitting over .400 in 1912, while playing even better defense. He had already made quite a name for himself in the Michigan area before 1912, starring in football, basketball and baseball during one year at Olivet College. He was getting the most attention from his baseball skills though, including catching the eye of Pirates scout Hugo Bedzek, who tried to get him to sign during his first year with Michigan. Apparently there was a verbal agreement between the two sides, but his coach at the time was the famous Branch Rickey, who was later a General Manager for the Pirates. In 1913, Rickey had an affiliation with the St Louis Browns, so that agreement with the Pirates was put on hold.

Rogers was tearing the cover off of the ball on offense during the 1913 season before an ankle injury ended his season in early May. He was hitting .431 at that time, along with one error in 137 chances in the field. His best tool was supposedly his arm, which also helped him as a quarterback. Despite not seeing any action for two months, the St Louis Browns were interested in signing him after hearing the scouting reports from Rickey. Rogers was soon sent a contract that he gladly signed, and he was a member of the Browns by August 1st. It was said at the time that St Louis manager George Stovall didn’t like using college players, so it came as no surprise to many that Stovall sent Rogers to Montgomery of the Southern Association on August 15th without getting him into a game. The reason given by Stovall in the papers was that Rogers had a hand injury that prevented him from playing at the time.

It’s a bit strange that Rogers was back playing college ball in 1914. Rules prevented professionals from playing college ball, which is why many players would play under an assumed name. The Pirates had a somewhat famous case of that happening with Dutch Meier, a college star who played exhibition games with the Pirates during the summer of 1905 under the name of “Koch”, then returned to school, only to eventually sign with the Pirates for the 1906 season under his real name. Rogers played pro ball under his own name, and it was fairly well publicized at the time. The fact that he was able to sign with the Pirates in 1914 might help explain how that happened. If he wasn’t under contract to any team, then he may have been able to pass as an amateur. I’ve come across cases of that happening during the era, with guys wanting to play for an amateur team, despite prior pro experience, and they had to make some sort of appeal in order to play as an amateur again. Also, if he was under a previous pro contract, then he wouldn’t have been able to sign with the Pirates. According to an interview he gave many years later, Rogers said that he “jumped” teams to sign with the Pirates, which would have went against the rules of pro baseball at the time.

Whatever happened, the 22-year-old Rogers, who often went by the nickname “Pud”, was back at Michigan in 1914. He batted over .400 for a third straight season and his defense was outstanding. The Pirates may have signed him because they wanted to get his teammate to leave school before he graduated. That was a young man named George Sisler, who belonged to the Pirates, after they purchased his contract from Columbus of the American Association in 1912. Sisler is known now as the Hall of Fame first baseman, but in college he was the pitching star for the University of Michigan and Rogers was his catcher. Sisler eventually ended up on the St Louis Browns, who were then managed by Branch Rickey.

Rogers showed up in Pittsburgh on June 1st and was immediately given a look over by manager Fred Clarke. At one point he went to the mound so they could see his arm. He impressed the first day with both his throws and his running speed, with all of the local papers saying positive things. One of the best signs from that first day of practice was what happened just two days later. When the Pirates went on a road trip to the east, he went with the team. That seems obvious now, but back then teams would often save on travel costs by leaving players behind, especially someone brand new to the team. There would often be a small group of players who would work out together at the ballpark, staying ready in case the team needed to send for one of them.

While things seemed to be favorable at the start for Rogers, they didn’t go well two weeks into his time with the Pirates. One of the problems at the time was that the Pirates had four catchers on the active roster. He would have needed multiple injuries or a blowout game to get into a contest early on. Then on June 16th, the Pirates sent Rogers and pitcher Dixie McArthur back to Pittsburgh, while three new players were coming into town to get a look from the team. McArthur was lucky that he got into a game on July 10th, because that ended up being his only big league appearance. Both of those players had to leave their uniforms behind so the new players could use them.

The next mention of Rogers was him being released by the Pirates on July 2nd after they were able to acquire promising young catcher Bill Wagner. On July 8th, the local papers made their last mention of Goodloe “Pud” Rogers (his first name was often spelled Goodlow, but Goodloe is correct), saying that he asked permission to sign with the Pittsburgh Rebels of the Federal League, but he was told by owner Barney Dreyfuss that he had to wait until his release was finalized. Teams often released players back then with ten days pay, which was done partially to reserve the player in case an issue came up, then they could bring the player back because they were still technically under contract. That happened at least a few times that I’ve come across during research. You could actually say that Rogers was with the Pirates a bit longer than 32 days because of the release rules, but he was on the active roster for 32 days.

Rogers said in a 1933 interview that he signed with the Pittsburgh Federal League team, but there’s no record of him playing. It’s interesting to note that a young catcher from Pittsburgh named Frank “Red” Madden played his only two big league games for the 1914 Rebels, with the first coming two days after Rogers was let go by the Pirates, and another a month later. It was said that he was staying in shape with the team and got forced into action when they ran out of catchers on July 4th. His other appearance was a pinch-hitting spot, where he struck out to end the game. That could have been Rogers opportunity to play in the majors.

Rogers never played pro ball again. He can be found coaching both basketball and baseball at Michigan for a time, then coaching and playing some semi-pro ball in Michigan. In 1918, he turned an unassisted triple play while catching after seeing a signal for a suicide squeeze with the bases loaded. There are two versions of the story, but the same results. One is that he called for a pitch out and easily tagged the guy coming home, who turned back towards third, leaving the guy from second in a bad spot and as he went back to second and got tagged, Rogers completed the play by running down the runner from first, who was confused by what was going on. The other says the same thing except that the ball was actually bunted straight down and he picked it up, then made the same plays, though the runner coming from second was out as he touched the third base bag first. After his playing days, he became a city attorney in Pontiac, Michigan, and then he became a judge.

Here’s a photo from his time with the Pirates, wearing his 1914 jersey 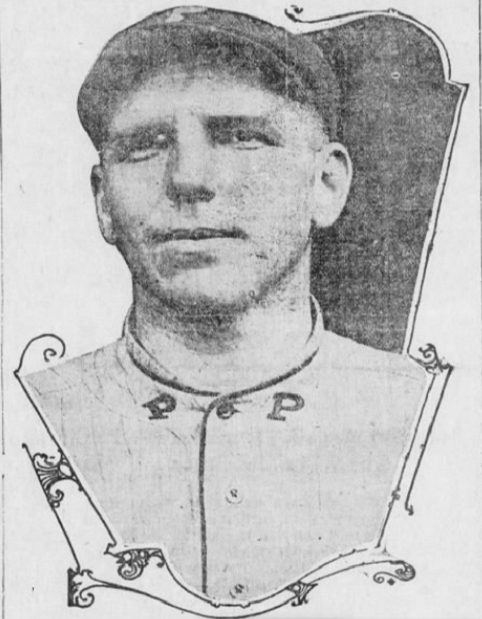