Today’s Card of the Day comes from one of my all-time favorite sets and it features Pittsburgh Pirates Hall of Fame second baseman Bill Mazeroski, who turns 85 years old today. The front design of the 1962 Topps set caught my eye the first time I saw it, much like the 1987 set, when Topps used a similar wood grain theme as a 25th anniversary tribute to the set. I’ll stop short of saying the 1962 Topps set is my favorite from the company because I really like the 1956 set with the portrait shot over an action background design, but the 1962 set would definitely make my top three. Here’s a look at the Bill Mazeroski card from that set, when he was still early in his career and not far removed from the greatest moment in Pittsburgh sports history. 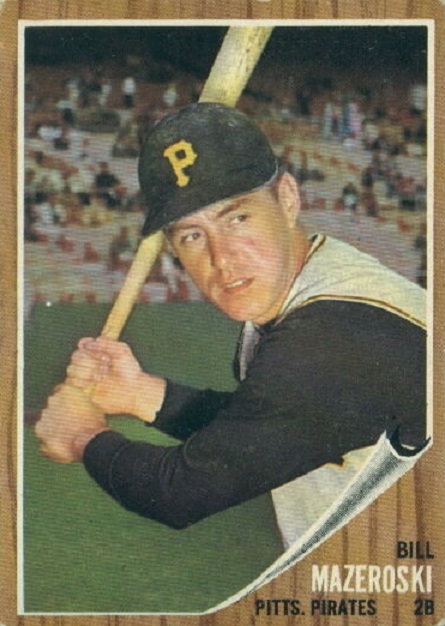 I’ve already gone into some detail about the front, but in case you didn’t already know what it looked like, there’s the wood grain design. What I also like is how they choose to add the player info in the bottom corner, making it look like the player photo was affixed to the wood grain background, but the bottom part of the photo is starting to roll up. I already know that some people from Pittsburgh don’t like the “Pitts” abbreviation, so if you don’t like it, send a letter to late 1961 and give the designers a heads up. Don’t ask them to change anything else though!

Assuming this photo was taken in 1961, Mazeroski was probably 24 years old at the time, since I doubt they waited until September to get photos. So this photo was taken less than a year after his big home run. There’s also a chance it’s from before the homer, as I’m sure Topps had a nice stock of photos for him by this time. There was no difference in the uniform between the 1960 and 1961 seasons, or going back to the 1957 season for that matter, so there’s no identifier to help there. 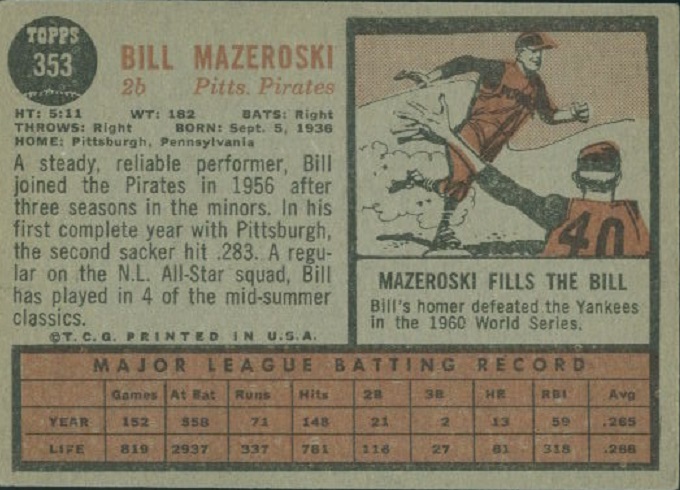 These cards had cartoons on the back and in 1962 it was fairly obvious what Topps would mention about Mazeroski in the cartoon section. This appears to be Mazeroski rounding third base after the homer, so you would expect that Topps would have the third base coach in the picture. I’m not sure if they put any thought into the other person in the cartoon and that’s supposed to be somewhat realistic. I’m sure most of you know that #40 was manager Danny Murtaugh. Even if you never saw him, he’s been among the retired numbers for the Pirates since 1977. The third base coach at this time was Frank Oceak, who can be seen in the video as Mazeroski rounds third base. Murtaugh at the time was in a group of players/coaches at home plate already. Oceak wore the #44.

This card is plentiful on Ebay because this is an extremely popular set. The amount that have sold in the last three months is basically the same as the amount that are listed right now (both over 180). That is good for two reasons if you’re a collector. The amount of options keeps the price down and gives you plenty of options within each grade. If you just want one to have, then they have sold for as little as $3 in low grade, but you’re getting what you pay for in those instances. If you want a presentable one, you should be looking in the $10 price range. In a PSA 7, which is an extremely nice looking card, one ended recently for $62 and another for $64 delivered. There are also a few autographed versions, some much nicer than others and those have various prices, though nothing over $50.

John Dreker
Today’s Card of the Day features catcher Milt May, who started his big league career with the 1970-73 Pittsburgh Pirates,…

John Dreker
It has been almost 14 full months since our first look at the 2014 Topps Heritage set. That article was…