If you check the record books, you’ll see that the Pittsburgh Pirates franchise had a 23-game losing streak during the 1890 season. I believe that it was a 24-game losing streak and I have a lot of facts to back that up, but that’s a story best saved for another day. I’ll just say that a regular season game got switched to an exhibition game after the fact by record keepers at a much later date (meaning years). I’m giving away the ending at the start here by saying that the Alleghenys brought a 23-game losing streak back home to Recreation Park on September 4, 1890, where they were set to face the Cleveland Spiders. It was their first home game since August 12th.

Obviously the local fans would be out in full force to see the eighth place team host the seventh place team, right? That would be a no. Just 102 fans showed up for the first of three scheduled games before they went back out on the road. As it turned out, they played just one game due to rain…sort of. It did rain on the 5th, but a doubleheader on the 6th could have been played according to the local scribes. The problem was that road teams back then were guaranteed to make at least $150 per game, and with tickets costing 25 cents, you would need at least 600 people to show up just to make sure you broke even with the opposing team. It was said that the Alleghenys preferred to postpone the game and then play it on the road, where they were the team guaranteed to get money. As you can see, our featured game today cost the owner/shareholders of the Alleghenys a lot of money out of pocket, but they were probably okay with it for one day due to the results.

Coming into this game, the Alleghenys had a 19-93 record. As bad as that sounds, the team started off with an 8-10 record, so they were on an 11-83 run. The Spiders weren’t much better, with a 31-76 record. Dave Anderson was pitching for the Alleghenys, making his first home start. He joined the team just five days earlier, but he already made three starts. He pitched very well in two of those games, while the other can be forgiven because it was his second start of the day. The Spiders were going with Ed “Seldom” Beatin, who managed to post a 22-30 record in 1890 for an awful team. By the way, that wasn’t his nickname, it just sounds good to me. I bought one of his 1889 Old Judge cards 15 years ago and that’s all I think of when I look at the card.

The lineup this day for the Alleghenys wasn’t as bad as you would think with that record. They had Eddie Burke in the lead-off spot and he had a decent eight-year career in the majors. George “Doggie” Miller was batting second and he had an even better career. Harry Decker was the leading hitter on the Alleghenys with a .274 average, one of the few above average hitters for the team that year. Guy Hecker, one of the greatest two-way players ever, was batting fifth. He won a batting title one year and he won 52 games, yes 52, another year. He was the manager/first baseman/occasional pitcher. Second baseman Sam LaRocque didn’t have much of a career in the majors, but he had a decent season that year and he batted third in this game, so the top five all represented solid or better MLB players at the time. The bottom of the order had utility man Bill Wilson, shortstop Ed Sales and outfielder Mike Jordan. Wilson was good for a bench role and Sales was a decent fill-in type, while Jordan was strictly a defensive star in the outfield, but he could not hit. Coupled with the pitcher spot, there were usually two automatic outs at the bottom of the lineup, though that was not true on this day.

The Cleveland lineup had an interesting rookie in center field and batting third in 19-year-old George Davis, who is now in Cooperstown. Batting ahead of him was shortstop Ed McKean, who formed one of the best offensive middle infields with second baseman Cupid Childs, though the latter didn’t join Cleveland until 1891. The rest of the lineup was devoid of big names, mostly because catcher Chief Zimmer, a future Pirates backstop at the time, had a rare day off. The Pittsburgh papers noted that three of the players for the Spiders were new big league players since the last time the two clubs played, while a Cleveland paper noted the opposite for the Alleghenys, with three of their players (Jordan, Burke and Anderson) being new.

There isn’t a full play-by-play of this game, but enough papers covered it that we have some details. The best way to tell the story is just by looking at the boxscore (see below), which has all of the defensive stats, as well as the added features below, such as the walks, hit-by-pitches, strikeouts, double plays, extra-base hits, sacrifice hits, stolen bases, passed balls and earned runs. There’s also two very interesting notes at the very bottom of the boxscore. The game time was all of 85 minutes. Imagine that happening now. The umpire was George Strief, known to avid readers of this site as the man who hit the first home run in Pirates franchise history.

Even in victory this day, the local papers were brutal to the Alleghenys, saying that they should have easily won this game if not for poor decisions by their hitters. Pittsburgh had a man on first base with no outs on three occasions and they decided to try to bunt the runner to second base. All three times it ended with a double play, which was unacceptable to the local writers, who all made sure to mention it. They all also made sure to note that three errors by Cleveland in the top of the third inning contributed to five runs that were all unearned runs on the record of Ed Beatin. The only detailed recap of the inning seems to indicate otherwise for the first run of the inning (see details below).

Dave Anderson gave up five hits, which included three singles and two doubles. He hit one batter, walked four and struck out four. As you would expect because it was 1890, he pitched a complete game. He also helped his own cause with two hits, a stolen base and a run scored. The 3-4 hitters came up big in this contest, with Sam LaRocque collecting two hits and scoring two runs, while Harry Decker had three hits and a run scored. Mike Jordan, the man with a .314 career OPS in the majors, even walked and scored a run. Eddie Burke made some nice plays in center field to help out his pitcher and the local papers were impressed with his base running.

As I mentioned, there’s no play-by-play here, but a newspaper from Cincinnati actually had the fifth inning scoring that proved to be the difference in the game. Here’s their recap by batter:

Wilson bunted him to second (they were actually successful at this one!)

Burke scored on a sacrifice fly by Miller

LaRocque and Decker each singled, then they both scored on a pair of wild throws to make it 5-1.

Both Beatin and Anderson gave up just one run over the final 6 1/2 innings, and multiple papers noted that they both pitched well. This was just the second of three career wins for Anderson. His first came on May 28th while pitching against the Alleghenys, while his final one came on September 13th against the Cincinnati Reds. That was also the next win for the Alleghenys, as they lost seven games in a row after September 4th.

One of the Pittsburgh headlines on September 5th read: VICTORY FOR HECKER AT LAST

The Pittsburgh Dispatch summed up this game perfectly by writing this about the reaction from the players on the Alleghenys after the final out:

When victory was assured, fact they fell on their knees and offered thanks. 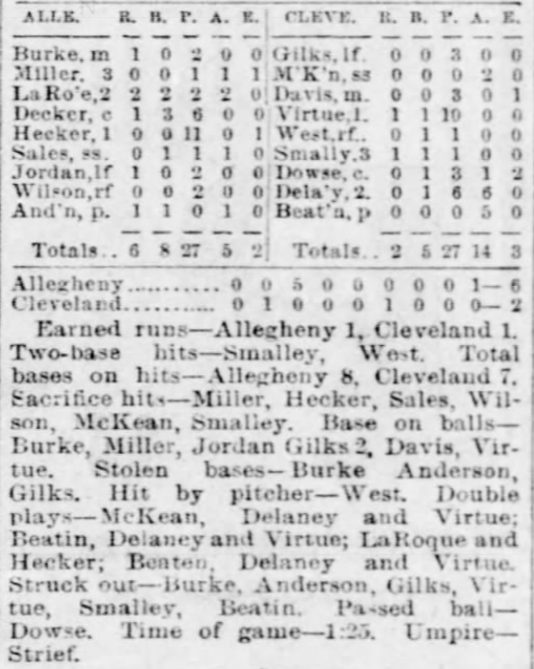 John Dreker
On June 22, 1970, The Pittsburgh Pirates took on the St Louis Cardinals in a doubleheader at Forbes Field. The…

John Dreker
The Pittsburgh Pirates were at Wrigley Field on Tuesday June 22, 1976 to take on the Chicago Cubs in an…

John Dreker
On May 24, 1922, the Pittsburgh Pirates were hosting the Philadelphia Phillies at Forbes Field. The two teams were playing…

John Dreker
I was looking for something to do for the birthday of George Grantham, an underappreciated player in Pittsburgh Pirates history.…