Today was a tough day to match up the Card of the Day to the history article. The options were extremely limited for the players born on this date, and the one transaction of note involved Grant Jackson, who has already been featured in this series twice. I decided to do a “horseshoes” post, where it’s close enough to count. One of the former players born on this date is 1944-46 infielder Vic Barnhart, the son of Clyde Barnhart, who spent his entire nine-year big league career with the Pittsburgh Pirates. We haven’t had a Clyde Barnhart card in this series yet, so now is the almost perfect time to add one. Here’s his 1923-24 Exhibits card. 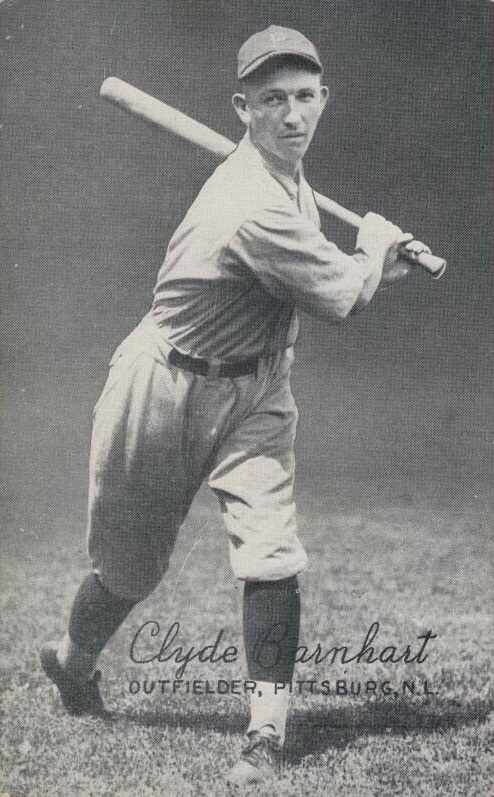 These Exhibits cards provide us with some great photos of players over the years, including this one of Barnhart. They’re also much bigger than your standard baseball cards from now. They measure 3 3/8″ x 5 3/8″, and they were distributed by the Exhibit Supply Company of Chicago. Collectors were able to get them from penny arcade vending machines. If you bought these new and you’re reading this article, congrats on making it this long, and you have made a nice return on your one cent investment (see pricing below). This particular set has 128 cards, but only some of the cards were new. A total of 70 cards use the same exact photos as a previous set from Exhibit, just with some minor design changes on the front.

Notice that Pittsburgh is spelled wrong here. I understand it on some cards produced right after they changed the town name back in 1911 (Pittsburg was the accepted spelling from 1890 through 1911), but this was 12 years later, so that right there is a spelling error.

I like looking at photos and figure out the year that they were taken by the uniform. This staged pose by Barnhart makes that impossible. He joined the Pirates in 1920 and the team used four different uniforms between 1920 and 1923. The differences are mostly on the front of the uniform, right chest area if you’re looking at them (left chest if you’re wearing it). The only one I can eliminate with this pose is 1920 because they wore white hats. The 1923 uniforms have a “P” on the left sleeve, but that’s blocked out here too. The 1921-22 jerseys have two distinctly different looking “P” logos on the front. The 1921 is similar to the boring logo that the Pirates use now, while the 1922 jersey had the “P” in old English writing, similar to the “D” the Detroit Tigers use.

There aren’t many choices here. In fact, Ebay has just one for sale and none in their completed auctions. So if you wanted one right away, this PSA 5 in the scan above is for sale for $480+shipping. When Ebay doesn’t give much help with a card, I search the interwebs for more information, and hopefully a closed auction from an auction house. I couldn’t find any closed auctions for this card but I found out that five of these cards have been graded by PSA, one of them graded higher (PSA 6) than the card you see above. That’s all I was able to find, so if you’re really interested, you’ll either have to pay up for this one or wait around for another. Needless to say, this card is tough to find.