Today’s Pittsburgh Pirates Card of the Day features relief pitcher Elroy Face, who sits atop the Pirates all-time list for both games pitched (802) and career saves (186). He pitched for the Pirates during the 1953 season, then again from 1955-68. He was sold to the Detroit Tigers on this date in 1968, ending his time in Pittsburgh. This is the third time that we have featured Face here, though it will be the first time that he has his own card here. He was here on a card with Hall of Fame reliever Hoyt Wilhelm from the 1960 Topps set. He was also here on a 1959 Topps card with Ron Kline, Vern Law and Bob Friend titled Buc Hill Aces. This card is just a solo Face card and it’s his rookie from the 1953 Topps set. We have only covered that set here once before, which is pretty weak for a series that has been running almost 18 months. So today is a good day to look at card #246 from the 1953 Topps set featuring Elroy Leon Face. 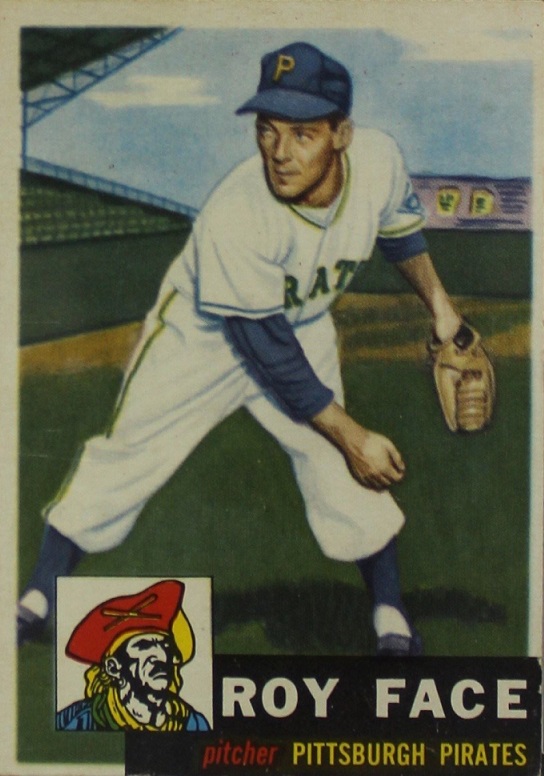 The best part about the front is that they included the old team logo. That pirate looks like he just saw the current logo and wants to do something about it. Topps in the early years used artwork based off of real photos, and they did a pretty good job here, though they sometimes didn’t get the team colors correct. In this case they included a team patch that the club wore during the 1951 season, which you can see on his left sleeve. The problem is that Face was with the Brooklyn Dodgers through the end of the 1952 season, until the Pirates selected him in the Rule 5 draft that December. It also appears that they used dark blue on the uniforms, but the Pirates switched to the familiar black and gold in 1948. That’s not an uncommon mistake in the early years. They were going off black and white photos, so there were some creative liberties with the team colors, especially teams that had recent changes like the Pirates. 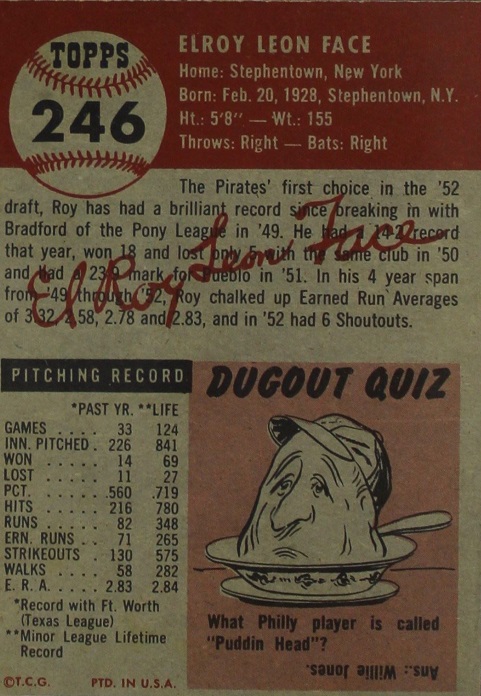 The first thing I’ll point out here is the Dugout Quiz. I knew the answer to that question when I was about five years old. My dad had an old glove, one that he used for a time when I first started playing baseball before age five, and it was a Willie “Puddin Head” Jones model glove. He eventually got a new glove to use because we played a lot of baseball, but he still has that glove to this day. I like the back on 1953 Topps cards except for one thing that they did on all of them. They put a facsimile autograph right over the writing on the back. All of the cards had one year of stats (usually from 1952 unless the player served in the Korean War), and then career stats. Since Face didn’t debut until the 1953 season, they only had minor league stats to use here. I’m a fan of how they chose to display the card numbers this year.

This card can get pricey in high grades because 1953 Topps cards aren’t that common, but they are popular. It’s also the rookie card of Face, so that adds to the collectibleness (not a real word). The highest priced copy on Ebay right now has a $1,599 price tag, and it’s graded PSA 8. For comparison, a PSA 8 recently sold for $624. After that, there’s a big drop in the asking price to the next one, which is graded SGC 86 (PSA 7.5). That one is for sale for $280, with a best offer option. If you just want a low grade version that looks presentable, you can get one of those in the $20-$25 range.

There are seven autographed versions for sale, but be careful with these because Topps put out an Archives set with 1953 replicas that are autographed by Face. It’s basically the same look as a real autograph card from 1953, except it came out in 1991. If you have any doubts about the year, just flip the card over and you’ll be able to tell right away that it’s either from 1953 or 1991. Trust me, there’s no confusion with the back.