It’s really a shame that the Pittsburgh Pirates gave up on Hall of Fame outfielder Kiki Cuyler so quickly over something stupid. It turned out to possibly the worst trade in team history when you factor in everything. They were giving up one of the best players in the game, entering his prime, before free agency existed, and all they got back was a veteran infielder and a fourth outfielder. What made it even worse is that neither player they received back lived up to their low standards, combining for 1.8 WAR. Cuyler had five seasons after the trade (and three seasons before the deal) in which he more than doubled that combined output. If he was able to play out his career in Pittsburgh he would be considered one of the team’s all-time greats. Instead he’s just an all-time great who spent the early part of his career with the Pirates and helped them win the 1925 World Series with an incredible season and a big hit in the series. Today’s Card of the Day celebrates the World Series performance. Here’s card #40 from the Fleer Fall Classic set, Kiki Cuyler. 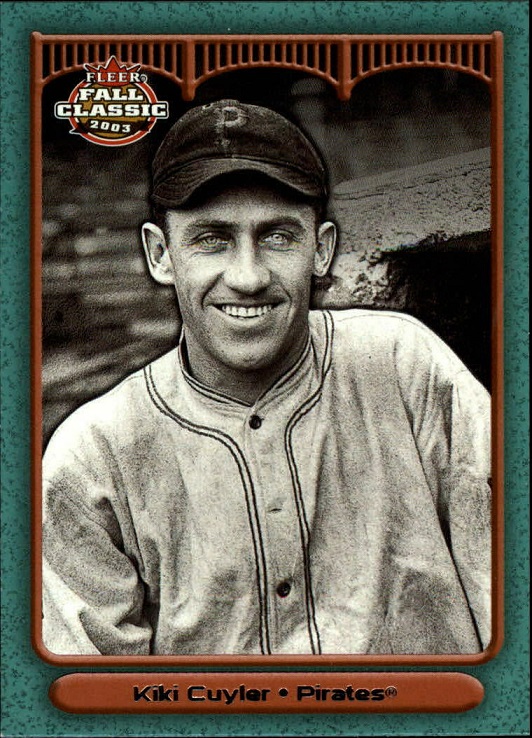 Cuyler was born on this date in 1898, which is the main reason he is featured here today. He was picked over other August 30th birthdays because his 1925 season is one of the best on offense in franchise history. He hit .357 and led the league with 144 runs scored and 26 triples. He also stole 41 bases, collected 43 doubles and 18 homers, and drove in 102 runs, all while putting up a 1.021 OPS. His 369 total bases that year set a still-standing team record. His 154 runs created is a team record as well. He capped that off by driving in six runs during the World Series, including one of the biggest hits in franchise history… 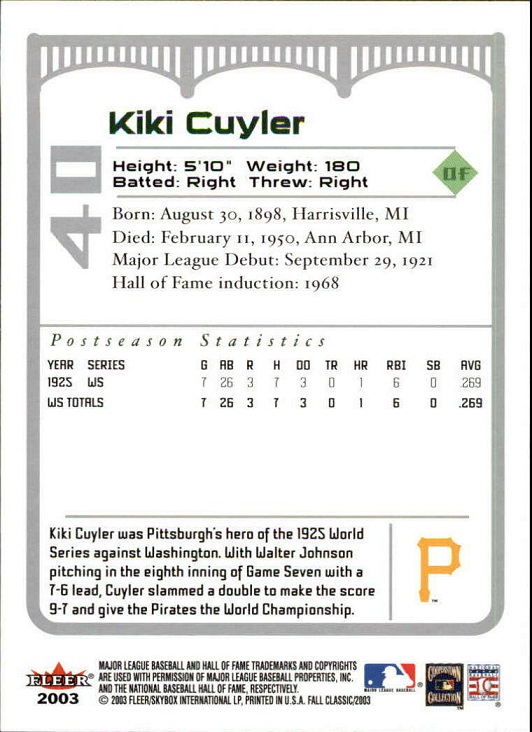 This card has a surprising error on the back. I suggest every Pirates fan reads up on the 1925 World Series, especially game seven, because it was one of the best games in baseball history. The Pirates were losing 7-6 to the great Walter Johnson with nobody on base and two outs in the eighth. As it says on the card, Johnson had a 7-6 lead, but the score was already 7-7 when Cuyler came up with the bases loaded. His ground rule double made it a 9-7 score, which was also the final score of the game. Fleer added a bit of dramatics to a hit that was already considered to be one of the biggest in World Series history.

Cuyler didn’t have the best series in 1925, especially when compared to his regular season. He hit .269 with one walk and no steals. The flip side is that he made his hits count. Besides the big hit mentioned above, he drove in a run earlier in game seven with a double. He also hit a two-run homer in the eighth inning of game two that broke a 1-1 tie. That homer came against Hall of Famer Stan Coveleski and it gave the Pirates a 3-2 win. So not only did Cuyler get a huge hit against (in my opinion) the greatest pitcher of all-time, He also had a huge hit against another all-time great who was nearly unbeatable in 1925 with his 20-5 record, and league best 2.84 ERA. To cap off his series heroics, Cuyler broke a 2-2 tie in game five against Coveleski with a seventh inning RBI single. The Pirates won that game as well.

This card isn’t rare, but there aren’t many auctions for it on Ebay either. It’s a common card and there are no auctions of note. You can get one for just over $2 delivered. You can also choose to grab the whole 87-card set for about $25. There are cards of Honus Wagner, Willie Stargell and Bill Mazeroski in the set.