Today’s Card of the Day comes from the 1982 Topps set and it features three Pittsburgh Pirates players on one card. Every team in the 1982 Topps set had one of these cards titled Future Stars, which featured three rookies who Topps thought had a chance to be solid players. Obviously the term “Future Stars” is a bit generic, because baseball wasn’t producing 78 star players every year from the minors. At that rate every team in baseball could run a lineup of stars out in three years. With that in mind, you could expect many of these Future Stars to never even be regulars in a big league lineup. However, the 1982 Topps Future Stars card for the Pittsburgh Pirates had two players who made it to the All-Star game during their career. One of those players was traded by the Pirates on this date in 1987. Here’s a look at that card and the players involved. 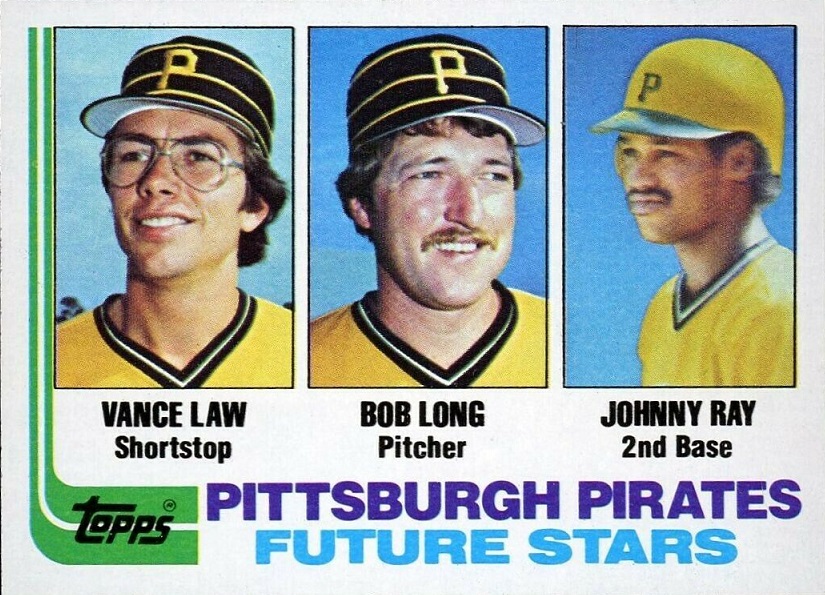 I have multiple copies of this card and I’ve seen scans numerous times and I don’t think I ever noticed that the Johnny Ray photo had some work done to it. Topps would take photos of players in Spring Training, so they had pictures of Vance Law and Bob Long with the Pirates already. Ray was acquired from the Houston Astros on August 31, 1981 and these cards came out around New Year’s Day in 1982, so there’s no way to get a Spring Training staged photo of Ray in this set. However, Topps had a photo of him at the end of the year, so they were able to throw that into the set. They used blue sky backgrounds for players for every team when possible, and almost every Future Stars photo is a staged portrait photo. This Ray picture was clearly pulled from somewhere else and given a blue background. Looking over the cards for every other team, his photo is definitely the worst quality, but the fact that they got him on this card at all wound up to be a great choice.

Both Ray and Law made All-Star appearances during their career. You could say that Ray should have been there more than once, as he had four All-Star type seasons with the Pirates, yet his only appearance came during his fifth best year (according to WAR) while he was with the California Angels. He was an excellent choice here by Topps, and he had a solid ten-year career in the majors.

Law wasn’t even a prospect when this card came out, so he probably shouldn’t have been included. He played 25 games in 1980 with the Pirates, and 30 more in 1981. In fact, he was already traded by the time most collectors were getting these cards in packs. He was sent to the Chicago White Sox on March 21, 1982. He played 11 seasons in the majors and his only All-Star appearance came in 1988 while with the Chicago Cubs. Like Ray, it wasn’t his best season either. Law had a better year with the White Sox and another one with the Montreal Expos. He wasn’t as good as Johnny Ray, but the connection to the great Vern Law helps his case and makes him a solid pick here by Topps.

Long pitched five games for the 1981 Pirates, making his big league debut not long before his 27th birthday. He had a 5.95 ERA, with more walks than strikeouts. I can make a case for his inclusion here despite the age and results during his brief big league time up to that point. He had a 15-3, 2.98 record in 157 innings in Triple-A in 1981. However, he struggled in the minors in 1982, and spent 1983 in Double-A. His only other big league time turned out to be 28 relief appearances for the 1985 Seattle Mariners. I won’t say that the 1981 record in Triple-A made him a good choice here, but I can see why they decided to include him. It obviously didn’t work out, but if I may quote some song lyrics, “two out of three ain’t bad”. 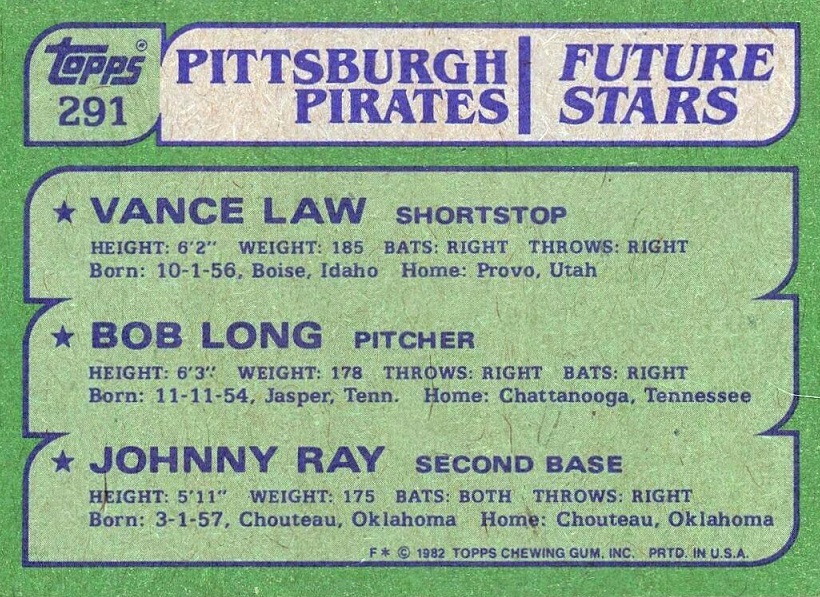 The back gives you just the basics on the players. No stats at all. They probably could have bypassed including both birthplace and current residence and added some quick stats in that spot instead. About the only thing that this card tells you is that Bob Long was probably a little too old to be considered a prospect. Even at 25 years old to open up 1982, Ray wasn’t exactly young in prospect terms, though he had some decent experience coming into that season. Law debuted in the majors at 23 years old, so that wasn’t bad.

There are plenty of options for this card on Ebay in the $2-$3 range, which includes delivery. There are two specific auctions that I want to point out. One person is selling two PSA 10 cards that are $49.95 each. There’s also a PSA 9 for $24 delivered, for comparison sake. The other interesting auction is one that is signed by all three players. That card is selling for $27.50 delivered, though it has a best offer option. There are a few signed just by Johnny Ray, and another signed by Law and Ray, but only one signed by all three.