Today’s Pittsburgh Pirates Card of the Day is one of my favorite cards from the 1920’s. From 1919 through 1924, the Pirates had a first baseman named Charlie Grimm. He’s one of my favorite players who fall into the category of “There needs to be a combined Hall of Fame”. Grimm played parts/all of 20 seasons in the majors, collecting 2,299 hits, with 1,077 RBIs, 908 runs scored and a .290 average. I do not consider him to be a strong candidate for the Hall of Fame as a player, but those are clearly impressive career numbers. He also managed 19 years in the majors, finishing with a 1,287-1,067 record, along with three National League pennants. I don’t consider him to be a strong candidate for Cooperstown as a manager either. When you combined those two things, that’s an extremely impressive body of work in Major League Baseball. There aren’t many people who can match him in that regard. I think Grimm should be in the Hall of Fame, just not strictly as a player or as manager.

Today’s Card of the Day comes from early in his big league career during his fourth season in Pittsburgh. It’s a pose that is also used in other sets during the era, but I chose this one because it has a simpler design that really makes the photo stand out. I’ll explain that better after looking at the photo. 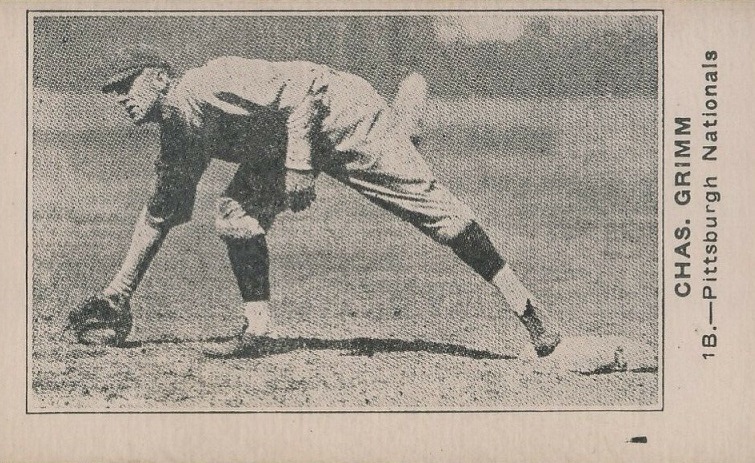 This photo above is used in the E120 set, which is a very popular set in the early candy/caramel category (The word “early” is where the “E” designation comes from). It’s also used in numerous other sets, including the E121, E220, W573, W575 and V100. Trust me, those are all baseball sets. I didn’t have scans available of all of those sets, so it was basically choosing between the E120 set and this card. Here’s the E120 Pie Traynor card for comparison sake. If you don’t want to click the link, then I’ll sum it up by saying that the E120 cards have a smaller photo due to an oval photo shape, along with a baseball-themed design that goes all the way around the photo. I like the look of the set, but in this case with the great horizontal fielding shot of Grimm, the photo looks much better when it isn’t cropped, and you don’t need the design to help the eye appeal of the card. I should also note that most cards in this set don’t have the horizontal photo layout, which makes the ones that do stand out more.

One small thing I’ll note here and that’s the spelling of his first name. On most of the other cards it is written out as Charlie. At least two of them have Charles, and at least two have “Chas.”, including the one used above. I just thought it was interesting that the same basic card in looks can be had with three different spellings of the same name. My grandfather’s name was Charles and he got the Charlie name often, especially from family, as well as Chuckie, which he then used repeatedly as a dog name. Charlie Grimm sounds the best in my opinion.

If you’re interested in this specific card, the scan is pulled from an SGC 60 (PSA 5) and it is $63. I’ve thought about buying it, so it might not actually be up by the time you see this article. If so, I apologize in advance. If you just like the pose and the set doesn’t matter, then the E120 is the way to go because it’s easier to find than any of the others. The only one right now on Ebay is very low grade and that’s reflected in the $39 price tag, which is a little bit high due to the condition being so low. There’s also an E121 that looks very similar to the card above and that one is $93 for a PSA 4.