Today’s Card of the Day subject is our second straight first-timer. I figured that I covered all of the big names for the Pittsburgh Pirates by now, but we saw yesterday with Jason Bay that it took some time to finally get to him. Jordy Mercer won’t go down as one of the all-time greats for the Pittsburgh Pirates, but he played for the team for seven seasons, so he should have been here already. As I mentioned yesterday with Bay, the fact that he hasn’t been here yet leaves with with his entire collection of cards to choose from, at least during his time with the Pirates. I decided to limit my choices because I also haven’t used a card from any 2016 set yet in this series. Add in that today is Mercer’s 35th birthday, and that’s how we got to a 2016 Topps Jordy Mercer as today’s Card of the Day. 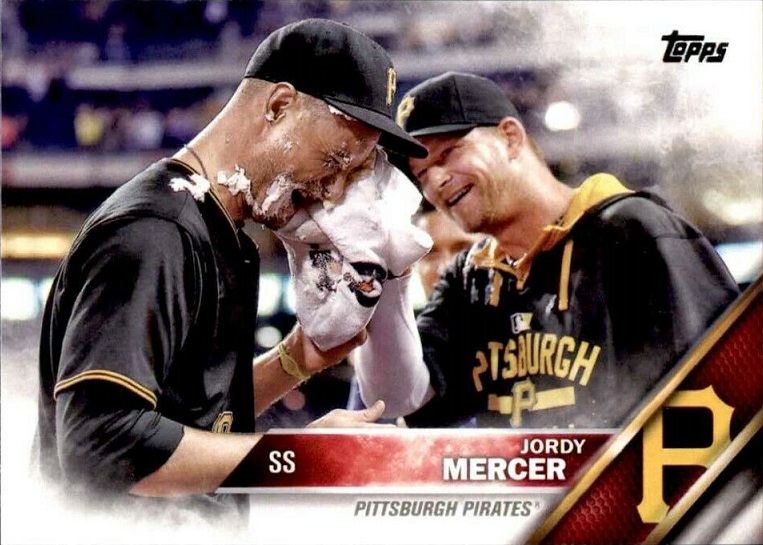 This is a great photo obviously, and it could almost pass as a photo for AJ Burnett’s card instead of Mercer, who won a game for the Pirates just so he could get a face full of shaving cream. Topps probably had some great photos of the game-winner. My guess is that this photo was taken June 26, 2015 after Mercer hit a tenth inning walk-off double against the Atlanta Braves. That was his only walk-off hit during the 2015 season. The 2016 Topps cards have a solid look with the borderless photos and all of the design in the bottom right of the card, which includes a team logo in the corner. 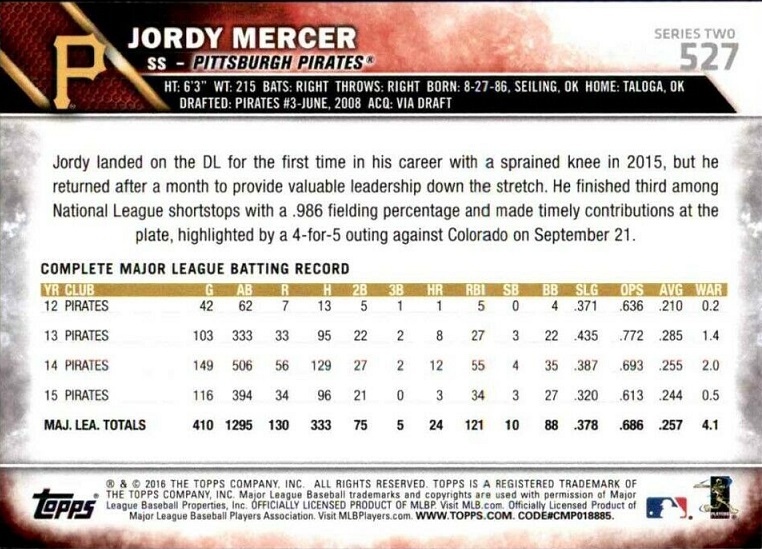 The back of these cards have a nice design, and it almost feels like the design was specifically for the Pirates. Like a scene from one of those pre-game videos the Pirates run, with a cannonball explosion causing the design here. While the logo here is far from one of my favorites over the years, it’s a nice touch on the back. They included his complete big league stats as well as some info on his defense, an injury, and a big game at the plate. I’m also a big fan of when they make the stats easy to read so you don’t strain your peepers.

Just like with most newer cards, there are different versions available. On Ebay I saw a blue sapphire version for as much as $6.50 (with a best offer). There’s a jumbo red parallel that is 5×7 in size and that’s very limited, but basically the same price ($6.99). There’s a jumbo sapphire that’s a 1 of 1 card and it’s only $12.99, with a best offer. Not bad for a unique card. Then there’s a sapphire edition superfractor (yeah I know, they go crazy with these things). That’s also a 1 of 1 and the asking price is just over $100. I guess if you own the only one, you control the price. There’s an autographed one (not factory) going for $17. There’s a pink one, that is 1 of 50 and it’s $13.  There’s a black one that is 1 of 65 and it is also around $13. There’s a mini version too for $7. There’s a gold version and a stamped version for the 65th anniversary for around $6 each. I could have just summarized this all with one sentence, but I really wanted you to see how crazy they went with variations. I didn’t even mention that the base card can be had for under $2 delivered from multiple sellers.