The Pittsburgh Pirates acquired Jason Bay on this date in 2003 in a deal for Brian Giles. Surprisingly, at least to me, this is his first appearance in our Card of the Day series. I thought I had all of the big name players by now, but clearly I missed a top player from the last 20 years of the franchise. The best part about including a player for the first time is that you have their whole catalog for the team to choose from as your feature. So I searched “Jason Bay Pirates” and went through scans until this one caught my eye. It’s from the 2008 Topps Allen & Ginter set and it features a piece of a game worn jersey. 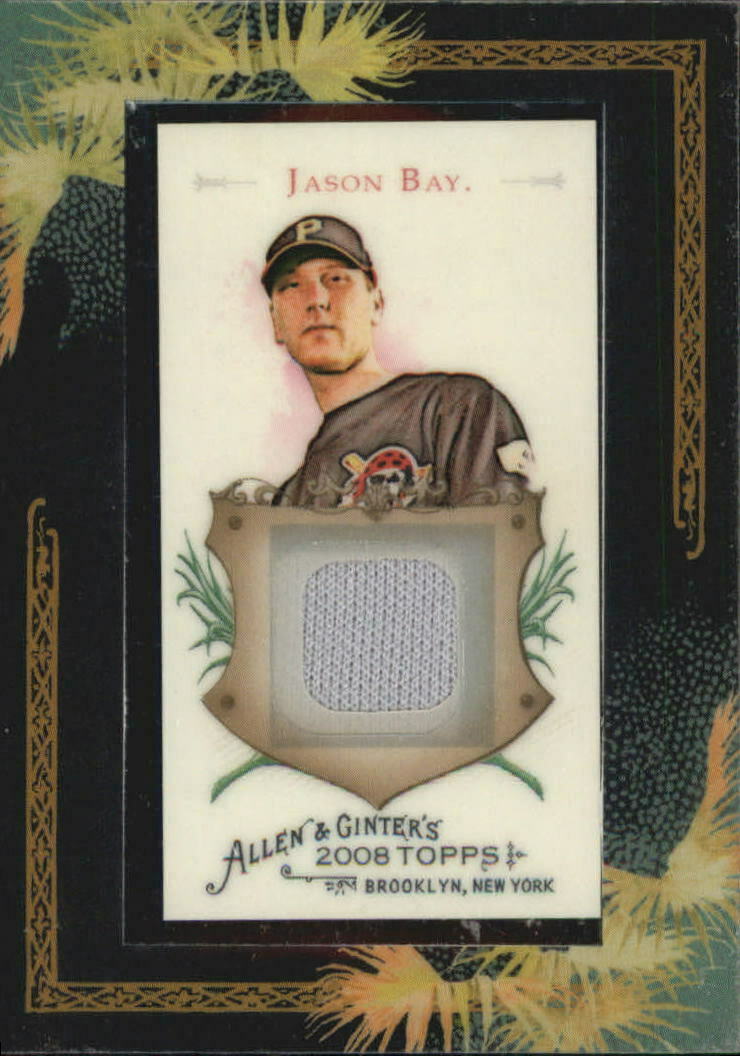 Allen & Ginter did something interesting this year, putting the relic card you see above inside of a frame holder. I honestly have no idea what they are going for with that frame and what it could possibly have to do with a baseball card or Jason Bay in particular, but it’s there. The important part is in the middle of the frame, and the baseball card that’s a throwback to the 19th century set by the same name (obviously not Topps then). They did a great job capturing the original look, while adding on a piece of one of Bay’s jerseys in the middle on the plaque. I’ll note that the scan here is enlarged, so the real jersey piece is very small. By doing that, Topps was able to produce a lot of these cards from one jersey. You would think that this card is hard to find, but that’s not so (see pricing section below). 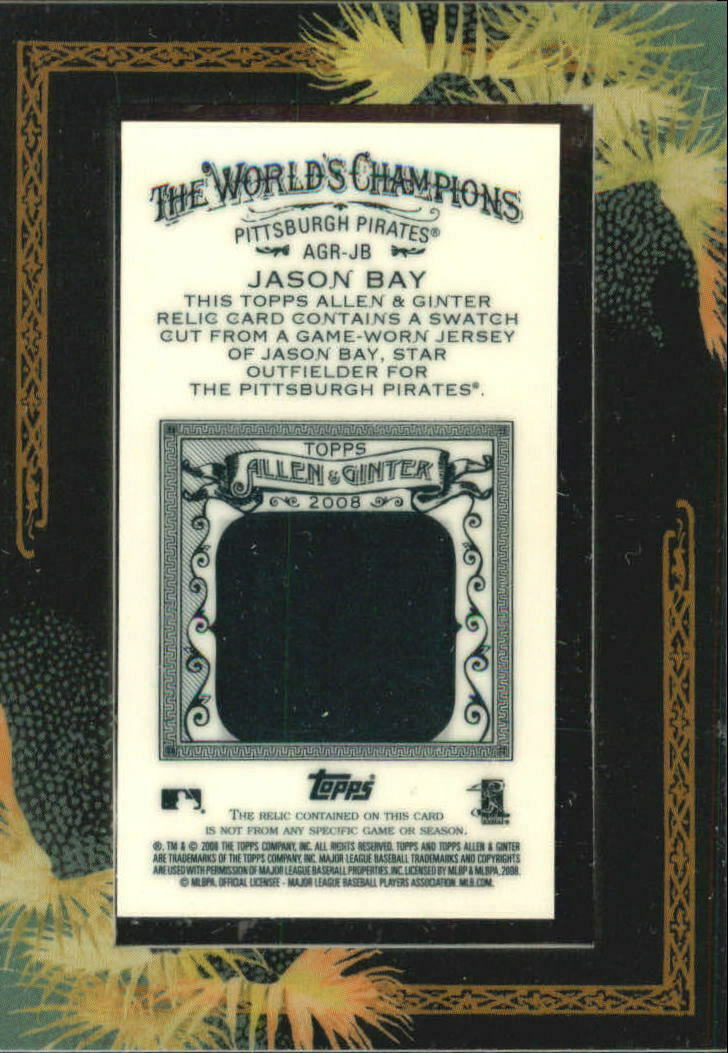 The back has the same design for the outing casing as the front, and I still don’t know exactly what they were going for with it. The back of the card has a similar look to the original 19th century Allen & Ginter, though the details on the back are obviously much different. It basically lets you know that the jersey piece is authentic. Near the bottom, before the legal mumbo jumbo, they have a note that says “The relic contained on this card is not from any specific game or seasons”. I’ve never seen that before, but I also usually don’t read the boring stuff at the bottom. Just thought it was interesting, and I’m guessing it was added for a reason, maybe someone claiming a jersey couldn’t have been from a certain player because the team colors were wrong and it turned out to be an older jersey from a previous team.

As for price and availability on this card, I checked a website called Ebay, which is apparently a big site for card sales? Anyway, this new site had one auction that closed for under $5 delivered for this card. I don’t know the exact price because it was listed for $5 with a best offer and they took a lower offer. As for active auctions, there are currently 19 active auctions for the card, ranging from $4 to $15. Since there’s nothing really different about any of them, meaning none of them have pieces of a logo/letter/number which sometimes draws more attention, then I’d just go with the lowest priced one, making sure that the seller is reliable first of course. (as an added note, I made an offer on an auction-style listing and bought the card used in the scans above. I paid just under $3 after delivery/tax. That one was the lowest priced one at the time I wrote up this article, but it was ending before the article was going up, so I didn’t include it in the price section)